Eric Leland Saak: Catechesis in the Later Middle Ages I. The Exposition of the Lord's Prayer of Jordan of Quedlinburg, OESA (d. 1380), Leiden / Boston: Brill 2015 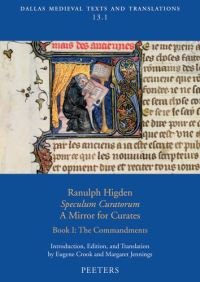 Ranulph Higden was a fourteenth-century Benedictine monk from Chester, who is best known for his Polychronicon or Universal History. He also wrote a number of other works including an Ars Kalendarii, an Ars compondendi sermons and the Speculum Curatorum or Mirror for Curates, part one of which is offered here by Eugene Crook and Margaret Jennings for the first time as Latin edited text and facing-page English translation. The text used here is from the only known manuscript of the 1350 revision, located at the University of Illinois.

In the introduction, Eugene Crook and Margaret Jennings place Ranulph Higden's Speculum in the larger context of late medieval pastoralia. The Fourth Lateran council in 1215 initiated a wave of pastoral literature that sought to help educate priests and prepare them to handle the new obligations for annual confession and communion. Over the next 50 years, English diocesan legislation attempted to implement the mandates of this council. With the Lambeth decrees in 1281, Archbishop John Pecham offered an instructional "Syllabus" to help correct clerical ignorance that would become the basis for a number of fourteenth-century authors including William of Pagula's Oculus sacerdotis (1320-8) and William Doune's Memorale presbiterorum (ca. 1343). When Higden initially wrote the Speculum in 1340 his concern, like other writers of the day, was to help educate priests in their primary responsibilities of educating the laity and administering the sacraments, largely in keeping with these established pastoral precepts. He covered the deadly sins, the sacraments and a host of other topics, including one initial chapter on the commandments.

In 1350, when Higden significantly revised and expanded the Speculum, the editors argue that much had changed. In the wake of the devastating effects of the Black Death, instead of focusing the work almost entirely on the priest and his instructional and sacramental responsibilities, Higden reoriented the Speculum towards the three-fold responsibility of the people - to know and follow the commandments, to understand the deadly sins and to understand the sacraments as a remedy to sin. Thus while other works from William of Pagula and William Doune are more concerned with "confessional and penitential procedures" (11), Higden's revision in 1350 is more catechetical in nature and seeks to instruct both clergy and laity.

The present volume contains the first fifty chapters of the Speculum on the Commandments. After the preface and two chapters on the place of the Commandments in relation to natural law and the law of the gospel, Higden spends the next thirteen chapters on the first commandment ("you shall not adore strange Gods"). Here he explains how God is worshiped - by faith as it is articulated in the Apostle's and Nicene Creeds - and what behaviors are contrary to such worship - sorcery, divination, superstition and the like, or what he calls "material idolatry" and "moral idolatry" or more generally sin (67). He finishes this section with three chapters on those who reject faith, namely Jews, heretics and apostates.

Chapters seven through twenty-one comprise the section on the second commandment ("you shall not take the name of God in vain"). Included here is a chapter on hypocrisy, swearing of oaths and a longer section - as one might expect from a monastic author - on vows, particularly as vows relate to the religious life and to a lesser degree marriage. Of particular interest to modern readers may be the section on marriage. Here one finds some level of practical balance between men and women in terms of spousal approval for such vows that pertain to continence, pilgrimage or entrance into the religious life.

Chapters twenty-two through twenty-seven cover the third ("Remember to keep holy the Sabbath Day") and the fourth commandment ("Honor your father and your mother"). In addition to the various behavioral requirements of the Sabbath (what to do and what to avoid), Higden spends much time in chapter twenty-four discussing the proper date of Easter. His discussion of the fourth commandment includes both material and spiritual support for parents, including a larger general discussion about the circumstances surrounding Christian burial and most importantly prayers for the dead.

The next eight chapters (chapters 28-35) cover the fifth commandment ("You shall not Kill") including either "corporal or spiritual" homicide (241). Included in this section is a discussion on scandal (spiritual homicide), and short chapters on war, dueling, tournaments, striking, injuries, force and fear. Modern readers may be interested in his views on abortion where he appears to be familiar with variant and subtle views on when a fetus is joined with the soul and thus whether one can be held accountable for homicide prior to such joining. Higden takes the more conservative approach and sides with civil law, which suggests that any abortion should be considered homicide. Also discussed in this section is killing in self-defense, which Higden, again following civil law, believes to be justified.

After a brief chapter on the sixth commandment (Adultery), Higden spends six chapters (chapters 37-42) discussing the seventh commandment ("You shall not steal"). He begins with eighteen points connected to the definition, circumstances and penalties surrounding theft and robbery. His somewhat lengthy section on offerings and tithes finishes out this section. As the editors point out, tithing was a popular subject for writers of these pastoral manuals and Higden follows suit with eleven sub-points on the topic, including clear and rather severe consequences for those who fail to pay.

The last four chapters of this section on the Commandments (chapters 47-50) focus on the commands of the new covenant. Chapter forty-seven contains fifteen precepts on charity or love. Chapter forty-eight contains twelve "evangelical counsels" (351), which he believes will help one avoid sin. Included here are counsels about poverty, obedience, chastity, conformity to doctrinal teaching and fraternal correction. This last counsel - fraternal correction - is the subject of chapter forty-nine. Chapter fifty concludes with instructions about how a superior should handle an offender.

Overall this work is a wonderful synthesis of late medieval folklore, established church authorities, canon law and pastoralia, giving modern readers an excellent glimpse into the life of late medieval church and society. The Latin transcription is especially useful for the scholar. The English translation makes this volume accessible for students in the college or seminary classroom. Both the publisher and the Dallas Medieval Texts and Translations series should be commended for offering another fine volume in their series.