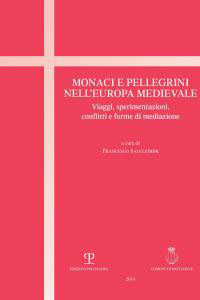 Francesco Salvestrini's volume collects the contributions from two seminars promoted by the Centro internazionale di Studi "La 'Gerusalemme' di San Vivaldo" in 2006 and 2007 respectively. The two core themes treat pilgrimages to the Holy Land in the late-medieval period as seen through the perspective of written accounts and the often difficult relationships between the religious orders in Europe during the Medieval and late-medieval periods.

In the first part of the volume, which contains essays on the first topic, Francesco Vermigli (15-31) considers various passages from the works of Bernard of Clairvaux to analyze his stance toward pilgrimages to the Holy Land as well as the crusades. Vermigli's selection of sources raises the question of whether the increase in the number of penitential pilgrimages and the crusades during Bernard's century was due in large part to a new ecclesiology that no longer viewed the cloister as the only or the most direct path to salvation.

The following essay by Renzo Nelli (33-56) studies records of pilgrimages during the 14th and 15th centuries in which the devotional-religious aspect is widely prevalent. These texts illustrate certain shifts connected to the time span in question; that is that pilgrimages were not only undertaken because of religious motivation, but also out of a desire to travel.

Gioia Zaganelli's contribution (57-72) concerns the marvels of medieval geography. Zaganelli focuses on the category of book Orientalism, or rather the collection of texts describing certain regions of the Orient (roughly corresponding to India, the Far East and Ethiopia) on the basis of compilations, with a wide range of different mirabilia.

In the next article, Roberto Angelini (73-84) examines two ideas concerning pilgrimage that emerge from the Libro d'Oltramare of the Franciscan Niccolò da Poggibonsi, composed from 1346 to 1350, and from the epistolary of the Vallumbrosan Giovanni dalle Celle, most of which dates back to the second half of the 14th century. Niccolò speaks in first person of an actual pilgrimage undertaken. His aim is to encourage pilgrimage as a devotional practice; by contrast, Giovanni produces texts that highlight the risks of pilgrimage and concentrates on the literary and symbolic importance of pilgrimages, indicating the course of history is a pilgrimage itself. His language reveals a depth and intellectual awareness superior to that of Niccolò da Poggibonsi.

Giuseppe Ligato (85-114) focuses on a single diary of the pilgrimage undertaken by the notary Nicola de Martoni (1394-1395). This diary shies away from religious motivations and focuses rather on the human fatigue, weakness and inadequacy that emerge during pilgrimages to holy places, yet without falling into melodrama.

Samuela Marconcini's work (115-130) looks at the marvels of the Orient as expressed in the records of Jewish Italian travelers between the 15th and 16th centuries, among which the account of a journey to Jerusalem by Mešullam da Volterra stands out. Mešullam is fascinated by the wonders of the Orient as seen from the perspective of the West.

Following Riccardo Pacciani's essay (131-138) that examines the first printed edition of the Peregrinationes by Bernhard von Breydenbach (1486), Laura Minervini's work (139-153) is dedicated to exoticisms in travel books through the Holy Land, and her work concludes the first section. Place names, exotic ethnonyms, and other categories of exoticism find greater mention in later texts and are the clear outcome of a process that essentially transforms the writings of journeys to the Holy Land into literary productions, with a strong sense of the autobiographical. The growing attention toward picturesque observation and curiosity in folklore and customs are signs of travelers establishing a new relationship with cultural otherness at the beginning of the modern age.

In the second part of the volume, in which we find a number of scholars who participated in the first seminar, Roberto Angelini's essay (157-168) looks at the insult levied against the Blessed Father Giovanni Gualberto, founder of the Vallumbrosans, during his stay at Camaldoli just prior to 1036. An examination of the hagiographic tradition clearly reveals that an offense was indeed made against the young monk, but perhaps only verbally. The discord between the Camaldolese and the Vallumbrosans arose only occasionally throughout the years, as seen by the treatment of this specific episode in the hagiography; in fact these two orders actually lived in harmony for centuries.

Riccardo Ciliberti's article (169-177) investigates the relationship between the Vallumbrosans and the Abbey of Montecassino. Ciliberti concludes that there was no direct relationship between Montecassino and Vallombrosa, although Cassinese sources suggest a political interest on the part of the monastery in relation to the Vallumbrosan movement, which was seen as the extreme wing of the reformist party.

The next contribution, by Antonella Degl'Innocenti (179-198), investigates the disputes between Cluniac monks and Cistercian monks in the first decades of the 12th century. These problems had their roots in the last decades of the previous century and are exemplified by the clash between Bernard of Clairvaux (representing the Cistercians) and Peter the Venerable (Cluniacs). According to Degl'Innocenti, this conflict risked going unresolved, as the affair of William of Saint-Thierry clearly exemplified. Once internal reform failed in Cluny, William of Saint-Thierry left to join the Abbey of Cîteaux with the help of Bernard. In order to overcome division between the two orders, however, he proposed the mystical as an alternative.

Giuseppe Ligato's work (199-231) looks at the separations and the distinctions between the Templars and the Hospitallers in the Latin Orient. According to Ligato, out of necessity, the Hospitallers were pushed to establish a military-oriented structure within the first decades of the 12th century. At the same time, the Templars, who had been militarized from the outset, marked their institutions with a push toward a new identity that would have put them in the condition of being self-sufficient in relation to the Hospitallers (upon whom they had been dependent in their initial phase). They did this, even as they continued with their aid activities.

Francesco Salvestrini's contribution (233-252) investigates the theme of conflict among religious orders in connection to the identity of saints and in view of those to whom they belonged. He examines the case of the Tuscan eremite Torello da Poppi (ca. 1202-1282). The roots of the conflict lie in the desire to affiliate with this venerated figure in order to bring prestige to one's own community. Respective hagiographic traditions show Torello as the object of dispute among the Vallumbrosans, the Minor Friars, and (to a lesser degree) the Augustinians. The Vallumbrosans came out the victors, given that they desired to recover an eremitic dimension and needed to appropriate this figure more than did the Franciscans, who were favored by much different experiences and testimonies of sainthood in the Casentino.

The final essay, by Timothy Salemme (253-265), examines the specific case of political and social unrest in the countryside of Milan, specifically in the Benedictine monastery of San Vittore at Meda during the second half of the 13th century. On the basis of the examined documents the monastery seems to have been favorable to the Visconti family but not to the Della Torre family. In fact, while initially the monastery kept out of the socio-political affairs of the territory, from the 1360s and 1370s they were swept into the aggressive politics of territorial expansion on the part of the Della Torre family. Contact between the monks of San Vittore and the Visconti was only occasional and served to recuperate certain assets, given that the Visconti would later impose harsh taxation upon the monastery.

Although this volume comes out after a considerable delay following the seminars, it collects a variety of valuable contributions that highlight a number of important complexities within the themes that were discussed and lays the foundation for future research.