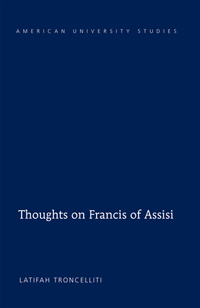 The book by Latifah Troncelliti consists of a collection of essays written during a period of research at the Institute of Franciscan Studies at St. Bonaventure University. These essays, which discuss different aspects of Franciscan history, have as their common theme "the Franciscan Order's makeover devised by the Catholic Church after Francis' death" (1).

After stressing the importance of Paul Sabatier for Franciscan studies, the first chapter dwells upon the Compilatio assisiensis, written by many authors at different times. The Compilatio is like a broken mirror: every piece contains a different image of Francis, reflecting the wishes of the individual authors, but not portraying the whole image of the saint (8). However, the work shows the development of the Franciscan Order, in particular the growing rigidity of the religious structure. After stating that Francis "could have been a historical artificial construct that compensated a human need for love and peace during a horrifying time of war, inquisition and pestilence" (12), the scholar wonders if it is possible to find new documents in the Cathar world which might shed new light on the Franciscan Question.

The second chapter analyzes Francis' canonization process, revealing it to be anomalous if compared with other cases. It brought political benefits to the Pope, who exploited the popularity of canonized saints. A similar case was that of the canonization of Anthony of Padua. According to the author, Anthony's sainthood "was very useful to the papal apostolic program to encourage the mendicant Order to preach for the good of the Church instead of following the original Franciscan program of social transformation" (23). The canonization became then a display of the Church's power.

In the third chapter the scholar discusses some religious institutions in medieval society, analyzing in particular the women's role. At some point women felt the need to organize themselves and work together: laywomen's communities offered a stable situation in the city life for women, particularly for the very poor, who supported each other with their work. The Church soon began encouraging them to create a religious structure. According to the author, it is difficult to distinguish who was really interested in a spiritual life and who was simply impelled by the need of mutual support in a communal life (35). Ascetic practices were a means for women to attain admiration and approval and to counteract the clergy's suspicions. An interesting case cited by Latifah Troncelliti was that of Margherita da Cortona: "she was looking not for humility but for control through fasting and hard-core penance" (47) in a society where women were marginalized. This, as in other similar instances, was a case of the "illusion of holyness" (48). Laywomen's communities could have been a "valuable social outlet for women's independence" but, like Francis' ideal, they did not find space to develop (49).

The fourth chapter examines the manuscript of the Sacrum commercium, the only source which seems to reveal the true Francis, while still failing to provide a solution to the Franciscan Question. It witnesses Francis' forma vitae, or rather his choice to live among the minores in society: work, paupertas and minoritas were strictly interconnected. The story itself does not give historical details, but shows the bitterness felt by Francis' followers for the betrayal of his spirit. However, by now Francis' historical reality still remains unknown.

In the fifth chapter, also dedicated to Franciscan women, the scholar discusses mostly about the scriptorium of Santa Lucia in Foligno and comes back to concepts already expressed in the third chapter.

The sixth chapter, the longest one, is dedicated to the strict connection between paupertas and minoritas as devised by Francis and his early brothers. The secret of Francis' forma vitae was work, according to everyone's individual talent; while with Gregory IX it underwent a gradual transformation that made preaching more important. The author then analyzes the different commentaries on the Rule by Hugh of Digne, Peter of John Olivi and Angelo Clareno. The scholar, at the end, points out that many questions remain unanswered, but concludes that "Francis was real and [that] his forma vitae was a fleeting moment of pure beauty lost in the mediocrity of human history" (114).

The book, as a whole, is a collection of the author's personal thoughts, as she clearly declares (2). This is reflected in the style she uses. In many passages, Latifah Troncelliti considers the Franciscan Order, the Catholic Church and the society not only in their past situation but also in their present one. According to the scholar, we can talk of the "complete betrayal of Francis'forma vitae" by the Church and his brothers (54). The author raises many questions, which can in part be interesting, but her answers are not necessarily shareable, also from a methodological point of view, since the sources do not always support her conclusions. Moreover, it would have been important to take recent publications of on the debated issues into account.

The Franciscan Question, one of the main themes of the work and a subject of debate among scholars also now as then, is discussed by the author not only with doubts, but also with a clear position. She states that "no one can establish for sure whether at the beginning there was a clear religious connotation attached to Francis' community": perhaps the religious element was added in a second time to justify its existence before the Church, and Francis decided to submit to this change because he felt responsible for his brothers' lives (75). According to Latifah Troncelliti, scholars oscillate between two different interpretations of Francis: the hermit and the revolutionary. She also states that "the socially involved Francis is to be favored, not because it is clearly the one closer to history, but because his figure fits today's particular need for social awareness manifested through the Franciscan desire to be of service: service to others is mandatory" (78).

The relation between Franciscanism and learned culture is also present in the book, but it would have been suitable to add some further references and specifications, given the importance of this issue in the Order's life. In the sixth chapter, for example, the author writes that "the friars destined to be preachers were required to undergo a rigorous intellectual training at the university level" (87), while in reality, particularly in the thirteenth century, only a few friars received university degrees, because most of them (also the lectores) were educated in the Order's provincial schools, as has been well proved by the historiography of the last decades. In the book the scholar rightly points out that Francis did not necessarily have a negative idea of culture: for him the issue was not to disregard the education, but rather to avoid its misuse. Latifah Troncelliti states that Francis had no reason to refuse learning, and in fact he accepted it in the case of Anthony of Padua (90). Anthony is an important figure in the early Franciscanism and the scholar, properly, dwells upon him in her analysis, though she does not adequately point out the rediscovery of the saint's Franciscanity carried on in the last years by eminent studies.