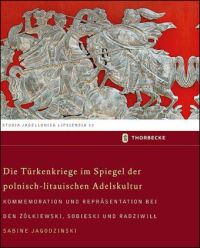 This well-researched monograph, which is based on author's dissertation, focuses on the questions of commemoration and the representation of the Turkish Wars in the culture of the nobility of early modern Poland-Lithuania. Jagodzinski provides us with a case study focusing on the prominent Żółkiewski, Sobieski and Radziwiłł families in the seventeenth and eighteenth centuries. By incorporating other aristocratic families intermittently into the discussion and contrasting Polish examples with nobility from the Holy Roman Empire, she covers a wide variety of noble landscapes within Poland-Lithuania from a comparative perspective. Her main focus is on the castle and city of Żółkiew (Ukrainian: Zhovkva), which was owned successively by the three families that underpin her study. This castle, situated on the edge of the southeast borderlands of Poland-Lithuania, was repeatedly threatened by Tatar raids, and it is the precarious nature of the settlement that serves to bind Jagodzinski's study together in the form of a delicate red thread that reappears time and again in different ways and under another owner.

Spanning over four centuries between 1414 and 1795, Ottoman-Polish relations were characterized by the remarkably peaceful coexistence. All of the sixteenth and eighteenth centuries, and a notable part of the warlike seventeenth century, were defined by relative peace and harmony interrupted by only outbreaks of violence. Although these wars lasted a relatively short period of time, the significant role that they played in the Polish-Lithuanian internal propaganda concerning the 'Turkish threat', as well as constructed memory, cannot be overemphasized. Jagodzinski has devoted her important study to these memories and the ways by which Ottoman-Polish confrontations were remembered.

Jagodzinski's hundred-and-fifty-page-long, well-edited monograph is divided into four chapters with an introduction, conclusion, an extensive bibliography and is splendidly enriched with seventy illustrations and twenty-four colored tableaus. Structurally, and in accordance with other studies in the Studia Jagellonica Lipsiensia series, its layout resembles an exhibition catalogue. Despite all this, the book cannot be said to be an easy Sunday-couch read for anyone coming from outside the field of art history. The author's language is rigorous, dense and challenging: this may be the result of the rather traditional layout of the chapters, in which she discusses objects and artifacts in an ongoing train of thought.

Jagodzinski follows a specific set of questions concerning the forms and strategies of visual commemoration, representation and ways of remembering the Turkish wars in Żółkiew (and beyond) in a longue durée perspective. The author questions the sources to understand the kind of influence that these processes have had on the identity and self-representation of Polish-Lithuanian noble families, exploring how ways of remembering changed over time (12). To answer her questions, she examines a wide variety of sources such as artifacts (drawings, paintings, sarcophagi, tombstones, sables, and textiles), archival inventories, and published narrative sources.

In so doing, Jagodzinski rejects the popular notion of lieu de mémoire in order to employ a mixed definition of 'collective commemoration' as used in the works by Jan and Aleida Assmann, Maurice Halbwachs and Aby Warburg. Her study thus operates with these various definitions being used interchangeably.

The book starts with a description of the castle in Żółkiew, built in the style of a defensive fortress (palazzo in forteca) by Stanisław Żółkiewski (1547-1620), who served as the Polish grand hetman and chancellor and who perished in the fight against Ottomans in the battle of Cecora in 1620. It is at this point that Jagodzinski starts tracing an intensification of commemorative practices in Żółkiew. The deceased hetman's family built a sarcophagus and tombstone for Żółkiewski, repeatedly memorializing him in ritualized masses and fashioning him as a miles Christi and martyr. His 'sacrifice' in the fight against Ottomans underwent in this way a significant process of sacralization in the noble milieu of Poland-Lithuania and certainly in the Żółkiewski family itself. As part of this process, Żółkiewski's head, taken as a trophy by the victorious Ottomans to Istanbul and later retrieved, was buried not together with the body but under the main altar of the parish church beside the relics of saints (36); in addition, his precious broadsword of Ottoman origin was donated to the spiritual center at Jasna Góra and was thus simultaneously sacralized, perpetuated and musealised. The blade of the broadsword was recovered in 1683 by King Jan III Sobieski, who took it as a talisman to help him lift the second Ottoman siege of Vienna.

Jagodzinski brings the politics of memory and the cultural reception of Ottoman material culture under Jan III Sobieski into focus in the core of the book. In Żółkiew's castle, which Sobieski renovated to some extent, Stanisław Żółkiewski's private chambers were preserved as "if he had lived there yesterday" (52). For the so-called "hetman hall", Sobieski ordered a selection of paintings depicting his own victories against the Ottomans and Tatars from the 1670s and 1680s. He built a 'Turkish bath' in the gardens and ordered the interior of the castle to be decorated by precious Ottoman textiles and an array of Ottoman weaponry. These objects, usually taken as booty, were later used according to their intended purpose, or redesigned. One example of the latter convention was that Sobieski recycled Ottoman tents taken at the second Ottoman siege of Vienna for the ceremonial audiences for foreign ambassadors, for whom an 'Ottoman tent city' was set up and re-enacted in the gardens of Żółkiew (102-103). The relief of Vienna, portrayed many times in the visual representations of Jan III Sobieski, bridges practices between the seventeenth and eighteenth centuries. Jagodzinski suggests that as the eighteenth century went by the image of Sobieski evolved into a lieu de mémoire, the meaning of which shifted from successful campaigns against Ottomans and Tatars to a more general, mythologized royal charisma (146, 150). Going beyond the study currently under review, it may prove interesting to explore Sobieski's place as one of the most commonly recognizable early modern Polish-Lithuanian kings in the memory of Ukrainian, Belarusian and - most notably - Polish societies today.

Having scrutinized the memory of Stanisław Żółkiewski and King Jan III Sobieski, Jagodzinski goes on to trace the memory of Turkish wars in the Catholic branch of the Radziwiłł family, which came into possession of Żółkiew in 1740. She describes how the new owner, Michał Kazimierz 'Rybeńko' Radziwiłł, who was related to the Sobieski family, maintained a selective memory of the Turkish wars, but only as far as was fitting for the self-representative purposes of the Radziwiłł lineage. The best example of this shift in focus was a new collection of sculptures, representing Rybeńko's lineage, which was dominated by both Jan III Sobieski and Stanisław Żółkiewski and was crowned by a statue of himself (134-135). 'Rybeńko' deconstructed the private rooms of Sobieski and Żółkiewski in Żółkiew castle and moved some of the Ottomanica conserved there to other castles. Jagodzinski also illustrates how the selective memory of Turkish wars under Radziwiłł found its best expression in a fussy 'throne of memory' constructed in his castle in Nieśwież for the one-hundredth anniversary of the Battle of Vienna (1783). Trophies, Ottoman weaponry connected with the persons of Sobieski and Żółkiewski, were retrieved from his treasury and publicly displayed in the Corpus Christi church of Nieśwież. Such occasional celebrations did not, however, change the shifting spectrum of the ways in which Turkish wars were remembered in the eighteenth century. According to Jagodzinski, in the face of Russian domination and the less threatening Turkish presence in East Central Europe in the eighteenth century, the 'Turkish threat' and past Turkish wars became less of a menace after 1740.

It remains unclear, however, how the vast collections of Ottomanica at Żółkiew influenced the material culture of the Polish-Lithuanian nobility in the late seventeenth and eighteenth centuries. Some hints provided by Jagodzinski show that Jan III Sobieski's successor to the Polish throne, Augustus III Wettin, tried to continue his commemorative practices by using bunchuks (Ottoman military horse tail banners) in performative way (83), by creating a 'Turkish chamber' in Dresden (145) and following the fashion of holding Turkish masquerade balls (103). In the marriage festivities of the future Augustus III Wettin, held in Dresden in 1719, King Augustus II employed three hundred 'Turkish janissaries' and 'janissary' musicians who exploited the material splendor of the Ottoman domains in a flamboyant display of weapons and clothes. In this manner, the new king positioned himself within the long tradition of self-fashioning in the 'Oriental' and Sarmatian manner of the Polish-Lithuanian nobility, while also recreating the 'native' noble identification(s) of Poland-Lithuania, particularly that of Sobieski. [1]

Jagodzinski's book is an inquiry into the lesser-known world of commemorative practices in Poland-Lithuania for scholars interested in East Central European history or Ottoman studies. The author delivers a sophisticated argument about the nature of the memory of Turkish wars in East Central Europe using sources and literature that have rarely appeared in past studies. The study brings together the high standards of German historiography with the study of shared Polish-Ottoman history.

[1] Private communication with Katarzyna Kuras (Kraków), who is preparing to publish a Polish description of wedding festivities, held in Dresden in 1719.