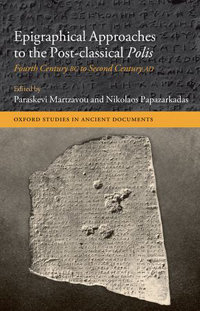 The volume consists of a thematic collection of miscellaneous articles derived from papers delivered at the Oxford Epigraphic Workshop over the last decade. In their introduction Paraskevi Martzavou and Nikolaos Papazarkadas reaffirm the idea that after Chaeronea city-states "were not deprived of agency" and, on the contrary, they "constantly invented new ways of exercising it" (2). Moreover, they rightly claim that inscriptions are crucial evidence for the history and functioning of the post-classical polis. As such, the editors aim at presenting in this volume a full range of the different epigraphical approaches currently applied to the study of Greek poleis of the Hellenistic and Roman age.

The first section collects articles related to the interactions between Greek poleis and external ruling powers. Miltiades Hatzopoulos discusses the 'Pistiros inscription' (SEG 49.911), a document issued by a mid-4th century Thracian king granting privileges to various groups of Greek merchants active in a trading center of the Thracian hinterland. By proposing a different reading and restoration of ll. 20-27, the author arrives at a persuasive explanation of the privileges listed in the document and concludes that merchants from Maroneia held a privileged position within the settlement. Peter Thonemann proposes new supplements to the edict of Alexander the Great inscribed on the north anta of the pronaos of Athena Polias' temple at Prene (I.Priene 1). The author argues that only those extracts of the edict aimed at establishing the territorial extent of the polis were inscribed on the anta and restores the text accordingly. The general interpretation of the document is convincing and all supplements have now been adopted by the editors of the new corpus of Prienean inscriptions. [1] Jonathan Prag offers a survey of the use of 'Sicilian' ethnics in classical and post-classical epigraphy and concludes that a 'Sicilian' identity, originating from the awareness of the geographical unity of the island, emerged in the 4th century and became progressively stronger under the unifying pressure of Roman rule.

The second section deals with the resolution of conflicts among or within cities. Angelos Matthaiou offers a new edition and epigraphic commentary of a Chian arbitration between the cities of Lampsakos and Parion (cf. BE 1938.294), probably dated to the 3rd century, and attempts to clarify several details of the procedure. Georgy Kantor discusses the date and historical context of a fragmentary inscription from Chersoneus Taurica dealing with provisions for the reform of local courts caused by the lack of eligible jurors (SEG 55.838). The inclusion of a provision to reject jurors, clearly modeled on the Roman institution of the reiectio iudicum, offers an interesting example of interaction between local legal traditions and Roman law in a quite peripheral city of the early Imperial age, apparently without any direct intervention of Rome itself.

The third section, devoted to socioeconomic aspects, contains two articles that are somewhat complementary to each other. Angelos Chaniotis discusses the epigraphic evidence for financial contributions to civic defense through public subscriptions and loans in the Hellenistic age. The author argues that benefactions and subsequent honors were important investments for the polis as well as the individual elite members and foreigners involved in the process. Moreover, the hereditary links they created connected individuals to the polis' interests for more than one generation and through the socio-political influence they bestowed on donors contributed to the aristocratization of Hellenistic society. Aneurin Ellis-Evans claims that public subscriptions and their subsequent epigraphic monumentalization were ideologically charged acts meant to advertise an idealized image of public life. It is interesting to note that the image of civic engagement and community solidarity that these inscriptions convey are clearly at odds with the aristocratization of the Hellenistic society that the institution of subscriptions seems to entail.

The fourth section deals with the culture of honoring. Irene Salvo examines a 3rd century honorary decree for a Chian (SEG 30.1073) and proposes a new interpretation of the offering to the goddess Roma mentioned in the decree - in her opinion a relief with a text both representing and narrating the birth of Romulus and Remus. William Slater analyses a fragmentary and very complex honorary inscription from Rhodes (SEG 54.734), dated to c. 200 CE, in the context of a general discussion of the category of 'eiselastic' games. The author rejects some previous assumptions and argues that this category was first formalized by Trajan to indicate those games whose victors were rewarded with lifetime pensions from their home cities upon their return (a formal ceremony known as 'eiselasis'). [2] John Ma reassigns to their proper context some 2nd century dedicatory inscriptions from Knidos (I.Knidos 164, 165) and discusses the late-classical and Hellenistic practice of erecting private honorific statues. Nikolaos Papazarkadas offers the editio princeps of six fragmentary inscriptions from Hellenistic and Roman Siphnos adding to our meager knowledge of the institutional history of this small island.

The fifth and final section gathers articles concerning institutions, ethics, and religion. Georgia Malouchou recovers two 4th century Attic inscriptions, first published by Kyriakos S. Pittakes in the Ephemeris Archaiologike and not included in IG. The first one enriches our corpus of phialai exeleutherikai, while the second one offers a new sample of a mortgage horos, peculiarly inscribed on a threshold. Through a survey of Hellenistic inscriptions, Nigel Kennell discusses the category of the neoi and their relationship with the ephebes in the gymnasial, military, and civic context. [3] Benjamin Gray analyses the language of later Hellenistic honorary decrees, mostly from Asia Minor, in order to detect the presence of 4th century ethical ideas concerning education. Sofia Kravaritou reconsiders all the evidence pertaining to the royal cult at Demetrias, including two 3rd century fragmentary inscriptions (IG IX, 2 1099; I.Thessaly 1030), in order to establish the content of the cult of the archegetai and ktistai mentioned in the texts. Finally, Albert Schachter and Fabienne Marchand presents six new inscriptions from surveys in the region of Boeotian Thespiai, dated from the 4th century BCE to the 1st century CE, which offer new insights into the history and institutions of the city. A general bibliography, an index locorum, and a subject index conclude the book.

The volume is an excellent collection of epigraphic essays, most of them characterized, as proudly stressed by the editors, by "the work of the hard epigraphist" (6) and accompanied by useful photographs of the inscriptions. As is probably inevitable with miscellaneous volumes, the interactions and connections between different articles are, with some notable exceptions, quite loose and the general impression is more of an heterogeneous group of articles than of a series of thematically related studies. Nonetheless, scholars and advanced students will find in this volume a vast range of topics and approaches useful to illustrate the most recent tendencies in the study of the post-classical polis, with the presentation of new findings and the reconsideration of extremely important inscriptions as the real cherry on the top.

[2] The author does not discuss a recent related article by Sofie Remijsen: The So-Called "Crown Games": Terminology and Historical Context of the Ancient Categories for Agones, in: ZPE 177 (2011), 97-109.