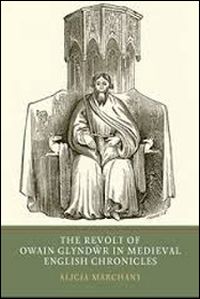 The proclamation of Owain Glyndŵr as Prince of Wales in September 1400 signalled the beginning of a widespread Welsh revolt against the English crown that lasted for over a decade. However, until Thomas Pennant devoted a lengthy section of the first volume of his Tour in Wales (1778) to the prince, Welsh authors were reluctant to engage with the revolt in any detail, and most of what was written about it was written in England. Nevertheless, while these accounts have been used by historians as evidence for the rising and subsequent attitudes to it, they have not been subject to close examination in their own right. Alicia Marchant breaks new ground, therefore, in placing them centre stage in the volume under review.

In her Introduction the author outlines the history of the revolt, with reference to previous scholarship, before explaining the aims and methodology of her study. This discussion demonstrates her grasp both of the particular sources chosen for consideration - sixteen in all, ranging in date from the early fifteenth century to 1580 - and the wider context of history writing to which they belonged. The discussion of the Tudor historians, especially Halle and Holinshed, complements recent work on Shakespeare's portrayal of Glyndŵr (as 'Owen Glendower') in Henry IV Part I (1598). [1] A useful appendix prints the relevant passages, with English translations, of the seven Latin texts that had previously been untranslated.

The main body of the book falls into two parts, each comprising three chapters, that set out to address two key questions. The first analyses how the chronicles' accounts of Glyndŵr act as examples of medieval and early modern narrative with respect to the "role of the narrator", "representations of time", and "representations of space". The discussion points up, for instance, the marginalization of Welsh voices in accounts of the revolt (Glyndŵr himself is attributed direct speech only in one chronicle, the early fifteenth-century Continuatio Eulogii), as well as the significance of the differing chronological structures adopted, including the placing of the end of the revolt. The second part, entitled "Imagining the rebellion", then considers the different aspects of the revolt selected for treatment in the chronicle accounts. Here, attention is focused on the representation of individuals (notably Glyndŵr and Henry IV), of the Welsh as a people, and of Wales as a country. Among the topics discussed are notions of national identity, including pertinent comparison with debates at the Council of Constance (1417). [2] The author also draws illuminating contrasts between the detailed depiction of Wales, based on personal experience, of Adam of Usk with the more abstract account of his early fifteenth-century contemporary Thomas Walsingham, who appears never to have set foot in the country. The volume ends with a brief summary of its conclusions, followed by a full list of works cited and an index.

Throughout the author writes clearly and engages with recent scholarship and debates (for example, taking the side of those that see chronicles as fully fledged narratives rather than unsophisticated recitations of events). She is sensitive to changes in approach by chroniclers over the almost two centuries covered, and also to continuities: while more diverse than that of earlier writers, the characterization of the Welsh offered by chroniclers under the Tudor monarchs was still largely negative, despite the partly Welsh ancestry of the latter. And she supports her arguments with close readings of relevant passages from her selected body of chronicles. This leads to some, probably unavoidable, repetition, as the same passages make multiple appearances in order to be scrutinized from different perspectives.

The approach adopted succeeds in revealing the distinctiveness of the texts studied. It might be objected, though, that the emphasis on "the richness and variety of the revolt narratives" and "the narrative sophistication" of medieval chronicles (218) is simply another way of saying that the accounts considered are very different from each other - as one would expect, given the differences in the works' purpose, provenance and period of composition. There may be a tension, too, between the aim, on the one hand, of using the accounts as case studies of medieval narratives and, on the other, of analysing their depictions of the Glyndŵr rising. The material arguably lends itself more easily to the latter task than the former. As Dr Marchant shows, the concept of "revolt narratives" is problematic, inasmuch as in many cases these "were [...] threads in a wider tapestry" (80), as exemplified by the illuminating summary of Thomas Walsingham's coverage, in which details of the revolt are interspersed with other events (69-70, 219-25). In other words, while the analysis presented offers perceptive comment on differing narrative strategies, it also suggests that the treatment of the revolt in each chronicle formed part of a wider narrative rather than necessarily constituting an independent narrative in its own right.

The precise focus of the volume remains somewhat uncertain, then, despite its declared aim of linking its analysis of "narratology" to a study of the aspects of the revolt covered in the chronicles considered, and thus of English chroniclers' perceptions of the historical actors involved as well as of the Welsh and Wales more generally. Nevertheless, there is much of value here. Above all, the volume not only highlights the enduring impact of the Glyndŵr revolt on historical writing in late medieval and early modern England but reveals in unprecedented depth how the accounts of the revolt were constructed in the works under consideration.