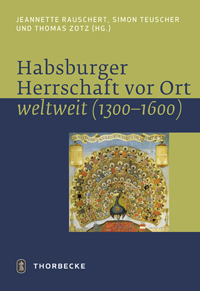 The rise to unparalleled prominence of the Habsburg dynasty was a pivotal event in European history. It had a long history, but the crucial phase took place between 1477, when the Habsburgs, by means of a marriage alliance, acquired the duchy of Burgundy, and 1516, when Charles V, an offspring of that alliance, ascended the thrones of Castile and Aragon. Within a few decades, a veritable empire had come into being, first in Europe, then in other parts of the globe. Its creation changed the dynamic of political power in Europe, generating a struggle for supremacy that would shape the course of European history for centuries to come. The book under review, the fruit of a conference in Lenzburg in 2008, takes this global empire as its framework, but focuses on the local and lowest level of the Habsburg rule in the various territories they called their own. The thirteen contributions (excluding the Introduction and the illuminating overview by Thomas Zotz) explore a variety of aspects of the Habsburg exercise of lordship in territories as far apart as Austria and Steiermark, Tyrol, the area between Lake Constance and the Alps, Switzerland, the Netherlands, Aragon and Barcelona, and America.

The key issue throughout the volume is that of the presence, or rather absence, of the Habsburg rulers. This was a factor of great importance, and was acknowledged as such at the time. As Machiavelli advised in chapter III of The Prince, "For if you stay there, disorders may be seen as they arise, and you can soon remedy them; if you are not there, disorders become understood when they are great and there is no longer a remedy. Besides this [...] the subjects are satisfied with ready access to the prince [...]". Given the acquisition by the Habsburgs of numerous provinces, their strategic overstretch was such that the rulers could not be present in many of them for anything but brief periods, if at all. Power necessarily had to be exercised locally.

As in the case of the historiography of other European monarchies and ruling houses, the focus on centralization, and its role in nation-building, has largely been abandoned. Indeed, the editors make clear that the volume consciously seeks to transcend the "teleology" of the modern nation-state (3). The sole exception is Klaus Brandstätter's chapter on "Local Administration and Habsburg Ecclesiastical Policy in Tyrol (14th-16th centuries)", which represents the older historiographical view, arguing for the growth of the power of central government at the expense of local groups and institutions. All of the other contributions fit into a more recent paradigm, according to which the local, particularist institutions, which the emerging state was once supposed to have overpowered, actually continued to thrive well into the early modern period. As one historian pointed out, "these [institutions] gave the early modern state its peculiar and idiosyncratic character [...] [C]enter and periphery were often strengthened in tandem, in a process of mutual reinforcement that allowed the center new juridical and administrative powers but concurrently strengthened traditional freedoms that institutional and corporate bodies of the periphery had enjoyed in the past". [1]

The volume abounds with examples that show that the Habsburg representatives on the ground, whether individual office-holders or institutions, not only enjoyed a degree of independence from the "central" government unthinkable in a modern state, but that their influence was at the same time substantially circumscribed and depended to a remarkable extent on the cooperation, indeed the initiative, of the populations they were putatively overseeing. In Switzerland the paradoxical result was the emergence of the story of Wilhelm Tell and the "evil bailiffs". As Simon Teuscher explains, the story did not reflect reality, for the bailiffs were not the agents of an oppressive feudal lordship. Rather, the moral criticism of the bailiffs was among other things the outcome of an increasing distance between rulers and their representatives, which deprived the latter of guidance from above and rendered them dependent on the local communities, whose members participated in their own governance. Andreas Bihrer, in his article on "The Ecclesiastical Policy of the Habsburgs in the Outer Lands in the Fourteenth Century", demonstrates that ecclesiastical institutions had a good deal of freedom from the dukes. Given the inevitable absence of the rulers, there was a substantial gap between their claims to power and the reality of power in the locality. Marina Stercken, on the other hand, finds the argument about the absence of the Habsburgs as a cause of failure to be somewhat irritating: the lord's absence was the norm, she observes, and in the area of present-day Switzerland it was made up for by other mechanisms. But as Wim Blockmans shows, no such mechanisms helped keep the Netherlands under Habsburg rule: the problem of long distance, compounded by the riches, urban culture and tradition of autonomy, made it exceedingly difficult to control those provinces. A decisive factor was King Philip II's loss of direct contact with the local elites who might otherwise have influenced his perception of the political realities on the ground.

Yet coming into close contact with such local elites was not necessarily a satisfying and politically invigorating experience as rulers might have wished for. As the study by Teofilo Ruiz of King Philip's visits to Aragon and Barcelona suggests, even the presence of the ruler was not necessarily a guarantee of successful assertion of royal authority. On the contrary, the visits generated conflicts, and rather than overawing local elites into submission, were used by them to reinforce their autonomy.

Taken together these chapters make a valuable addition to our knowledge of the Habsburg rule in the crucial period of its phenomenal growth between 1300 and 1600. But they also raise doubts as to the evaluation of political power in this period in general, and that of the Habsburgs in particular. The single most salient characteristic to emerge from this volume is the weak penetration of lordship: communities nominally under Habsburg rule were largely self-governing, had far-reaching autonomy, whereby the representatives of the "central" government enjoyed an exceedingly large area of discretion, and often did not so much work for the ruler as for his subjects. With their decidedly from-below perspective, the various contributions add up to a history of the Habsburg empire with the Habsburgs mostly left out. This makes one wonder whether the picture presented here is not overdrawn. Research on other European monarchies, while reaching similar conclusions as to the limited reach of central governments, did also emphasize the aspects of negotiation and cooperation with local communities. Here, however, these aspects are not given sufficient attention. By focusing on the local communities, this useful volume raises important questions regarding the nature of political relations in the period, but does not address their implications.