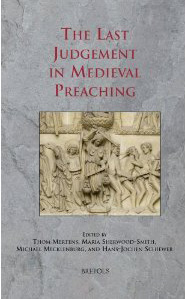 Although sermons are particularly resistant to book-length analysis, this volume is impressively coherent. Among the prominent themes in its nine chapters is the tendency of medieval preachers to bypass the details of judgement and hell while offering direction on how to avoid damnation. As Roger Andersson notes in his chapter on Old Swedish sermons, "The popular sermon was not the medium for philosophical or theological discussion. What was important was to make the audience understand that if they behaved badly they would be punished" (69).

The book begins with a helpful introduction explaining its origins in a 1996 research group formed to stimulate and coordinate interdisciplinary study of medieval vernacular sermons and the expansion of that project. In 2000 an international symposium concentrated on sermons about the Last Judgement; from it came these chapters on vernacular sermons in English, Middle Dutch, Old Swedish, and German as well as Medieval Latin model sermons and dramatizations of the Last Judgment.

The introduction helpfully lays out the sermons' patristic and medieval theological context, explaining the individual or particular judgement and the general judgement as well as the time between the two. It also distinguishes between learned and popular traditions concerning the Last Judgement. The learned tradition, derived from Platonic philosophy, conceived of heaven as a beholding of God, "enjoying God's essence in love" (xii), whereas the popular offered concrete depictions of both heaven and hell, not as distinct from earthly life but its continuation or parallel (xiii).

Both of these traditions, but especially the popular, shaped medieval preaching on the topic. As the editors note, sermons of the popular genre provided both a "heightened potential for arousing fear" and "an element of consolation," with purgatory offering people "a chance to help their dead," so establishing "a culture of commemoration"(xxvi). Thus the subject of Judgement could "serve as an instrument of pastoral care" (xxvi).

Although the sermons explored have different national and linguistic origins, they contain a number of common themes, including the Fifteen Signs of Judgement, dating from about the twelfth century and consisting mostly of natural disasters (xxiii). So for example Veronica O'Mara's chapter on the Last Judgement in prose sermons in Old and Middle English calls attention to the emphasis on judgement in Old English sermons and their dependence on the Fifteen Signs. She notes that Middle English sermons, commonly preached only on the second Sunday of Advent, were less concerned with judgement than those in Old English. In fact, she says, Middle English preachers, assuming listeners' familiarity with the judgement, could simply treat the concept as "a mainstay [...] to stimulate virtue and to condemn vice," providing "a lively narrative to which they never tired alluding" (37). As she writes, "For the preacher and his congregation alike this most effective mode of threat, direct cajolery, and firm instruction was - in all senses of the term - the final trump" (37).

Given the origin of this project in a research group, discussions of methodology dominate the chapters, underpinning the researchers' conclusions with an exploration of the intensive research that led up to them. In the chapter on Catastrophic Sermons and Apocalyptic Expectations, Jussi Hanska raises the core problem faced by everyone on this project: "Where else [besides sermon collections] could one locate sermons dealing with apostolic expectations?" (118). His thoughtful report on his own sources reveals the necessity of foraging not only through sermon collections, in manuscripts, incunabula, and critical editions, but also through contemporary chronicles or documents in which audience members reported on sermons by famous preachers.

Such concern with sources recurs throughout the book. Thom Mertens, in his chapter on Middle Dutch sermons on Luke 21:25-33, the gospel for the second Sunday in Advent, discusses seven manuscript collections and one Middle Dutch translation of Gregory the Great's Homiliae XL in evangelia, which probably had the same liturgical purpose as the seven sermon collections. This chapter is particularly detailed in its explanation of the shape and contents of the collections and of the individual sermons, with a table of the particular verses and themes of the Lukan passage used in the various collections (53).

Complementing individual authors' examination of manuscripts and collections, the bibliography at the end of each chapter begins with a list of manuscripts and archival resources, and the book's first index lists manuscripts cited, followed by an index of names of people, texts, and collections. Extensive footnotes throughout the volume provide additional detail and guidance to manuscript collections and editions, as well as manuals and secondary sources.

Other chapters concentrate on popular preachers of sermons on the Last Judgment. Stephan Borgehammar's chapter on Medieval Latin model sermons surveys collections of sermons by five preachers, noting the value of incunabula, with their frequently thorough indices. Linking these collections directly to their authors points up differences among individual perspectives in the sermons. Borgehammar concludes his chapter with an appendix analyzing the organization of one late-medieval sermon collection, emphasizing its indices "in order to give an idea of how variously - and indeed easily - it can be studied" (14). Carola Rezich similarly focuses on a series of sermons by the Dominican preacher Johannes Nider and his portrayal of the Apocalypse "as a book of wisdom which teaches rather than threatens," incorporating "everyday examples and images, drawn from social life and common experience" (155).

A number of the chapters call attention to preachers' tendency to emphasize the ways to prepare for Judgement rather than its experience. It is appropriate, then, that the book ends with Michael Mecklenburg's consideration of why the detail of Judgement appears more commonly in vernacular German drama than in sermons. Treating the plays as literary texts and considering them narratologically, he explains the inherent difficulty of presenting a narrative of future events in sermons, whereas the play is able to give "a real representation of the Last Judgement, [making] it the temporary present of the actors and the audience. Where the sermon gives explanations and offers solutions, the play shows the hopelessness of the situation for the damned, but also the joy for the righteous" (174). So for example he cites examples of angels blowing their trumpets and Mary pleading with Christ for mercy on sinners (170-171). He also cites the way the settings of the plays linked "the everyday life of actions and audience, thus really bringing the Gospel into their lives" (175).

The chapters of this book echo one another in method, theme, and detail, reinforcing the main ideas rather than duplicating them and so yielding the reader a growing familiarity with the topic. Together they provide insight not only into sermons on Judgement but also about ways to study sermons and, by implication, other genres of medieval writing. They are also succinct and readable; despite being packed with detail - there's nothing vague or amorphous here - they are consistently fascinating. The overlap among the various voices in the volume contributes to a well-integrated collection, with chapters coalescing to provide a clear overview of the way medieval preachers across Europe treated the Last Judgement.