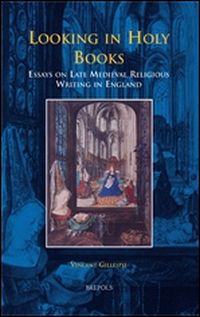 This collection of eleven essays on English religious writing from the late 15th and early 16th centuries, largely from Carthusian compilations and pastoral handbooks, examines theoretical and practical considerations concerning religious writing and instruction of the time. Vincent Gillespie, Tolkien Professor of English Literature at Oxford, originally published these essays between 1980 and 1999; original venues and dates appear on pages xiv-xv. His preface helpfully provides an overview of their themes and notes such recent beneficial developments in the field as improved historicization and recognition of "each decade as a cultural micro-climate" (viii).

The essays are arranged not by date of publication but thematically, in three parts: I. Instruction: What to Read, II. Rumination: How to Read, and III. Contemplation: Writing the Ineffable. A recurring insight in the book is the regular movement between clergy and laity of treatises and handbooks on pastoral care, indicating the strong lay demand for such materials and the error in viewing preaching as the chief medium for pastoral instruction in the period, for example categorizing widely popular texts such as the Speculum Christiani as preaching aids despite their widespread use by non-clergy.

The book's first part concerns religious education of the laity and the clergy, considering handbooks and tracts published by bishops, verse reading texts in grammar schools, and handbooks for laity. The first three chapters concern treatises and handbooks of pastoral care, including pastoral adaptations of Walter Hilton's Scale of Perfection; the fourth focuses on the 14th-century poem Piers Plowman, concentrating on its use of the Pater noster as showing "how ordinary men of good will can become vehicles for the word and work of God" (94). This essay insists on the centrality of the laity in late-medieval religious life and notes Piers Plowman's emphasis on lay devotion. Gillespie's exploration of the Pater noster in English devotion of the period, with numerous manuals and treatises explaining its seven petitions, reinforces Langland's insistence on "the power of simple faith and the sanctity of the working poor" (79).

Part two moves from instructional texts to mystical works, from spiritual miscellanies such as an English version of Guigo II's Scala claustralium through the texts in the library of Syon Abbey; the section culminates with attention to the Passion in late medieval spiritual writing. The first chapter, about lectio divina in spiritual miscellanies, pays particular attention to the many works instructing the devout to move from reading to meditation and then to prayer. Gillespie points out the problems of adapting this scheme, which originated in monasteries, with a Latinate population, to lay audiences, with uncertain literacy. This concern is explicit in Hilton's advice to the audience of his Scale of Perfection that if she cannot read the Bible, she must occupy herself instead "in prayer and in meditation" (117).

The proliferation of vernacular religious books in the period makes clear the laity's eagerness for instruction. So chapter five concerns the growing market for "vernacular guides to godliness" (145), including renewed use of spiritual works from earlier centuries. While the clerical miscellanies were still predominantly in Latin, then, the growth industry was vernacular works. Chapter 6 concerns the role of the Carthusian brothers of Sheen in guiding their Birgittine sisters at Syon by providing books for their use. Through analysis of the books in the Birgittines' library, Gillespie infers that the Sheen brothers did not produce the Syon spiritual texts and so rejects the long acceptance of a "de facto . . . textual community" binding the two houses. This meticulously argued and documented essay incorporates catalogue entries for three of the Syon miscellanies, demonstrating the value of examining both books and library catalogues for evidence of the interests and contributions of members of religious communities.

The third portion of the book deals with the more familiar religious works of 14th-century England, especially the Cloud of Unknowing and works by Richard Rolle and Julian of Norwich, but its thematic focus on ineffability moves forward from pastoral instruction to the search for direct knowledge of God. The chapter subtitled "Rolle and Affectivity" is particularly insightful in its analysis of Rolle's writing, revealing the way Rolle shapes readers' responses to Christ's passion as a central "affective strategy" (257). Gillespie notes the literary experimentation that characterized Rolle's career and concludes that Rolle's prose indicates that he "was capable of deliberate manipulation of the responses of the audience" (258). In the last portion of the chapter Gillespie takes the reader through an analysis of Rolle's writing, revealing Rolle's rhetorical skills while tacitly offering a model of how to do such close textual work.

Chapter 10, on Julian of Norwich and what Gillespie refers to as "the poetics of effacement," focuses on the ineffability at the heart of the contemplative search, considering what he refers to as "the flickering play of signification," with language not merely inadequate for the human reach toward God but "a hindrance to our understanding" (278). But God responds to the inadequacy of language, he points out, with what lies at the theological core of Christianity: "But the word was made flesh. Christ's lapse into language in the incarnation is his own freely given sacrifice of his ineffable nature on the altar of human meaning" (279). This chapter, which fundamentally articulates the way "the prison-house of language" (278) hinders human attempts to speak clearly to God, abounds in resonant, lyrical prose. Aside from Gillespie's incisive explication of Julian's thought, the grace and power of his own writing makes the chapter worth reading and reading again, just for the pleasure of the thing. At its core is an emphasis on Julian's link between ineffability and God's compassion for the human effort itself: "the groping into the unsayable . . . will be comprehended by the goodness of God" (294). Finally, Gillespie points out, in speaking to other Christians, Julian herself "becomes the word spoken by God" (295). This chapter should be read by anyone concerned with mystical writing in general and ineffability in particular-and by anyone drawn to close literary and linguistic analysis.

The final chapter in the book further concerns ineffability in the Cloud and The Book of Privy Counselling. This chapter does more than the others to theorize the idea of ineffability, to enlarge its significance within mystical theology. So Gillespie states, "Mystical language seeks to deliver us to the threshold of ineffability...Mystical writing can only ever be about thresholds" (311). Elsewhere he writes, ending with an image that becomes the essay's title, "Mystical writers send despatches from the threshold, artists' impressions of the apophatic, postcards from the edge" (324).

Thus, having moved from the multiplicity of late-religious didactic texts, through which clergy and laity alike sought to know how and what to read in order to become informed and devout lovers of Christ, Gillespie concludes with three chapters examining how some of the most important religious writers of the period wrote of their search to know God. The whole book is powerfully instructive for all who are concerned with religious life and thought in the period, and the final three chapters are brilliant.

The book has a few problems, of course, inevitable in any such collection. The length and detail of the chapters often make it difficult to determine their argument and thesis; abstracts at the beginning of each one would have helped to provide clarity. Despite the lengthy footnotes bringing the scholarship up to date, it is disappointing to find no bibliography to the book, though it does contain two helpful indices, of manuscripts cited and of authors and works. The amount of untranslated Latin and Middle English will surely deter some readers from understanding as much as they want to, and readers unfamiliar with the field and its discourse and debates, with the journals that originally published the essays, and with the works examined will find it harder to understand Gillespie's contribution than those better informed.

But those are quibbles, inevitable given the origin of the book. All such complaints fade in light of its innumerable strengths. It is an important volume, with materials we are fortunate to have gathered in one place.