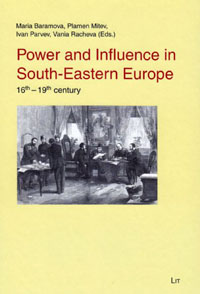 South-Eastern European historiography is recalibrating. In workshops and collective volumes, scholars are discussing ways to overcome the subordination of the field to European history and to engage directly with new historical perspectives and methods (global, comparative and transnational history). [1] The narrative is in the process of turning from its traditional focus on states and statehood, ethnic and social groups, to "agency", "networks", and "power".

Power and influence in South-Eastern Europe, 16th-19th century is a collective volume that exemplifies this moment of transition. It features thirty seven papers delivered at an international conference at Sofia University in 2010, which extend the geography of the region from today's Hungary to Istanbul and Crete. Its aim is to study South-Eastern Europe as a "cross-point of histories" and of "different layers of 'powers' and 'influences'" that acted as "driving forces behind many historical processes" (2).

Despite such promise, the editors do not provide a theoretical framework for the volume's key concepts: "power", "influence" and "historical processes". Moreover, neither the editors nor the contributors engage with the sophisticated scholarship in the related fields of Ottoman and Mediterranean history, which explores power through aspects such as imperial governance, inter-imperial transfers of knowledge and cultural mediation. With the exception of Ivan Parvev, most contributors imply that "power" and "influence" emanate from the state's ability to impose its will and represent itself in domestic and international contexts, and from the mobilization of society for the redistribution of resources.

Parvev, who compares Russian and Habsburg "dominance" in the Balkans between the 17th and 19th centuries, engages broadly with the volume's main concepts. He distinguishes between "power", associated with military conquests, territorial annexations and political mandates, and "influence", via ideologies, culture or economic relations. Yet Parvev's concept of "influence" is vague, as it successively refers to an approximation, a precedent or an opportunity for "power".

The volume is organized in seven sections that discuss topics ranging from inter-imperial diplomacy and warfare to imperial rule, power brokers and agents, and political reform and mobilization. Most of the contributors cast the Balkans in the traditional historical frame of the Ottoman Empire and of the Eastern Question. Notable exceptions are Maria Baramova and Angelina Vacheva who inquire how the politics, conflicts and geographies of the Balkans shaped in turn the imagination of the Habsburg and Russian Empires about their own power and mission.

The papers vary greatly in their length, critical analysis of the sources and theoretical sophistication. Nevertheless several papers are noteworthy for opening new perspectives on their subject matter. This effort is particularly noticeable among the authors who re-examine the international concepts, networks and dynamics that shaped the map of the region (Gábor Kármán, Dimitris Michalopoulos). Arno Strohmeyer explores the multiple dimensions of the concept of "friendship" that framed the early diplomatic contacts between the Habsburg and Ottoman Empires. Maria Baramova examines early Habsburg geopolitical conceptualizations of the Danube in relation to the Habsburg Empire's evolving agenda towards the Ottomans. Jovan Pešalj detects a direct relation between the Habsburg Empire's changing treatment of Ottoman foreigners and its economic appropriation of Ottoman Hungary during the 18th century. Selim Aslantaş, Momir Samardžić and Elena Smilyanskaya explore the ways in which the European Empires employed the protection of Ottoman Christian communities as an instrument to defend their own authority in the Balkans during the Eastern Question.

The activity of foreign diplomatic agents in the Ottoman Empire and Ottoman diplomats in the Empire's successor states also receive extensive analysis (Rossitsa Tasheva, Aleksandar Rastovic, Silvana Rachieru). Boro Bronza surveys the creation of the Vienna Oriental Academy and its impact on Habsburg policy towards the Ottoman Empire. Gülay Tulasoğlou explores the activity of the British consuls in the Ottoman Balkans as an interface between the local and central reformist initiatives during the first wave of Ottoman reforms in the 19th century.

Among the contributors who approach Ottoman imperial rule in the Balkans, Viorel Panaite outlines the historical background and the judicial and administrative aspects of Ottoman sovereignty over the Danubian principalities. Grigor Boykov's article on the urban history of Plovdiv identifies a specific Ottoman model of urban growth that accompanied the Ottoman offensive in the Balkans. Nora Anani-Sia's study about the 15th-16th century history of heterodox religious elites in the Balkans suggests a direct connection between the activity and cults of three influential dervishes and the development of Ottoman power in the region. Other analyses inquire the social aspects of imperial rule such as the involvement of the Ottoman military class in the control of landed property in the Balkans (Paulina Antonova) or the Ottoman colonization of newly conquered territories (Milena Petkova-Encheva).

The volume also features several papers about the transition from empire to the nation-state, and the implications of 19th century Ottoman reforms for the coagulation of nationalist agendas. Andreas Lyberatos examines the "dialectic relationship" between the Tanzimat reforms and the Ottoman society, which in the case of the Orthodox community in Plovdiv produced forms of mobilization amenable to national repurposing. Manos Perakis documents the intricate social and political dynamics that undermined the political model implemented by the Ottoman government in 1878 in autonomous Crete and which echoed the Tanzimat goal of integrating the local non-Muslim population. Moshe Maggid explores the local and international factors that propelled members of the traditional-minded Jewish community from Eastern Rumelia to participate in the first Jewish agricultural settlements in Palestine, a pioneering venture that had sponsors across Europe. This paper, while too short, is noteworthy for calling attention to the history of the Balkan Jewish communities as well as for inserting Southeastern Europe in a broader narrative.

Overall, despite the lack of a theoretical frame that could have guided and brought the individual contributions in dialogue, this volume offers several insightful, well-structured papers that reflect the ongoing effort to adopt new approaches and to validate the relevance of Southeastern European history to other historical fields.