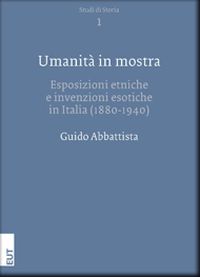 Guido Abbattista's book is the result of ten years of meticulous work on the phenomenon of "living human exhibitions" in the nation state of Italy between 1880 and 1940. This syntagma describes the ways in which live "specimens" of ethnic groups from outside Europe were displayed by the colonial powers in their national, international or world expositions as of the second half of the nineteenth century. They were exhibited in villages that resembled their natural habitat to curious onlookers: for the purpose of lucrative entertainment, propaganda, and even science. Hence Abbattista sees the entire ethno-exhibition dispositif as a biopolitical procedure, in which human bodies are tamed and given new meanings. The operation served in his view to establish and consolidate state power and state identity, since the alterity exhibited here was that of suppressed people cast in the role of subservience to the respective colonial and imperial powers. Abbattista interprets ethno-exhibitions as an expression of that possessive and predatory instinct characteristic of Western behaviour towards non-European peoples since early modern times.

As the author elaborates in his introduction, this exhibitionary phenomenon has been explored almost exhaustively in various European countries. His desire to finally close the gap with an analysis of this historical occurrence in post-unified Italy inspired the work. In the exhibitions, which were organized primarily by the governments concerned rather than private entrepreneurs, gain a certain propagandistic significance in this context: they articulate the will of Italian liberal governments to construct the national identity of the newly established state as, inter alia, a trade and colonial power.

The book is divided into two main sections. In the first section Abbattista takes the human exhibition at the Turin national fair in 1884 as a starting point and case study. Since it represents the first major reconstruction of an African village in Italy and is amply documented, he analyses it in depth. This allows him to describe at length the display of six people from the colonial city of Assab (Eritrea), which fell into the hands of the Italian government in 1882: from the perspective of historical events, historical reception and the history of mentalities. The author first of all reconstructs the fate of the six Danakil people in minute detail, from their recruitment in Assab to the vicissitudes of their stay in Turin and Milan, and their ultimate journey home. Through the careful viewing of contemporary press organs, Abbattista was able to examine the reception of this phenomenon by diverse political groups and actors, such as government, left-wing opposition and the church, and to locate these responses as either support for or criticism of the liberal state and its colonial policies. Seen from a history of mentalities perspective, these voices tell us something about the "racist" thinking that, with few exceptions, spanned an entire era. "Racist" for Abbattista is the idea of ranking world peoples in a hierarchy of race. Taking this as a given, he recognizes how deeply entangled in the notion of racial hierarchy people were who - unlike those who merely had contempt for the six Danakil people - even expressed pity for the six in a paternalistic and benevolent manner. Where the sources allow, the author also attempts to give space to all of the voices in this discourse, including those of the six victims of the exhibition dispositif. With the aid of photographic portraits of the six Danakil and their testimonies, which they confided to the newspapers via translators, he manages to convey the unease felt by the protagonists at their public spectacle: they were under the impression they had been invited to Italy as visitors, not as the visited. The author's desideratum to persevere with these observations and, from a "reverse anthropology" perspective, to recreate the Danakil view of the European public was - apart from minor details - unfortunately doomed to failure as a result of poor source material. One of the great merits of Abbattista's work is the fact that he approached this crucial issue at all.

In the second section of the book, he analyses subsequent ethno-exhibitions chronologically and according to type. The repeated commodification of human groups from outside Europe enables him to outline the semantic development of ethnological expositions. Summarizing, Abbattista remarks that from the 1880s and more so as of 1911, when Italy conquered Tripolitania and Cyrenaica and took a more active part in "the scramble for Africa", the propaganda message of the "human expositions" became more nationalist and more imperialist. The indigenous peoples on show, who came from the newly acquired colonies, no longer stood there as exotic, strange, wild, if not frightening beings, but more and more as Italian compatriots, as proof of how the Italian character had triumphed in the African colonies. In ethno-exhibitions shortly after the war, the indigenous element became a symbol of patriotism, order and reassurance: the Marine and Colonial Exhibition in Genoa (1914) and the Milan Trade Fair (1922) went so far as to display the "extremely loyal" Askaris who had served in Africa under the Italian flag during the colonial wars in Eritrea, Ethiopia and Somalia.

Of the many exhibition typologies during these years, two are of particular interest. Firstly, the ethno-exhibitions that several mission congregations organized within the framework of the large Italian exhibitions. They were a specific form of mission propaganda, whose aim it was to document missionary activities by means of village exhibitions and to collect money for the missions. For the congregations these exhibitions were an illustration of their missionary work, i.e., the newest conversions among the indigenous peoples, as evidenced in the Italo-American exhibition in Genoa on the occasion of the 400th anniversary of the discovery of the Americas (1892). Here, Christian converts as exemplified by a group of indigenous inhabitants of Tierra del Fuego, the Fuegians, were paraded as proof of the missionaries' civilizing role. The care taken by congregations in terms of exhibitionary conditions for these guests merely confirms the dispositif of commodifying human beings. Secondly, "exhibitions" in the anthropological sciences are highly specific in nature, since they are played out on the anatomy table and the bodies gazed at are dead. Abbattista, however, does not confine himself to associating living human exhibitions with the anatomical scrutiny of the corpses of non-European peoples as two sides of the biopolitical and colonialist instinct for supremacy. He documents the interdependence of these two forms of display and takes the example of the dissecting activities of the Turinian anatomists / pathologists Carlo Giacomini and Giacinto Pacchiotti: the objectivizing cycle of non-European peoples, which began with living ethno-villages on parade in "human zoos", ended up in some cases on the pathologists' dissection table, as Abbattista reconstructs.

This richly reflected reconstruction does not fail to lambaste the exhibition of non-European peoples as an excessive and belligerent manipulation of the "other", both body and mind. A condemnation that Abbattista not only voices in terms of past practices but also in admonishment of those of the present: by continuing to sanction the border between our own identity and that of migrants from the South and East of the world and to subject migrants to surveillance, internment and physical stock-taking, the West upholds the dispositif of human reification. Taking this conclusion as a point of departure, the book could be reversed and read as a genealogy of contemporary reification mechanisms of the "other". In this sense the historical reconstruction of a not quite vanquished biopolitical attitude towards non-European peoples has an enlightening value and confirms the ethical responsibility of historiography.