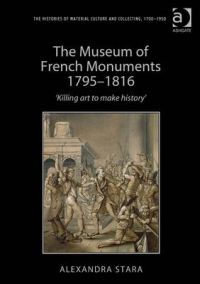 What is claimed on the cover of the dust jacket is both amazing and pertinent: Alexandra Stara's book is "the first volume in two centuries on Alexandre Lenoir's Museum of French Monuments in Paris." The topic of this monograph is the oddest of Paris museums. It emerged as a child of the French Revolution only to be closed down at the beginning of the Restoration. Within the space of five chapters Stara tackles the history of this institution, the spatial staging of French (art) history through its exhibits, the art history perspectives it conveyed, and the debates on its legitimacy that ultimately led to its closure.

In 1790, the Committee for the Alienation of National Assets ordained that nationalized art from Parisian churches be collected in the expropriated convent of the Petits-Augustins until a final destination was agreed upon. Alexandre Lenoir, the artist appointed guardian of the temporary depot in 1791, soon began, beyond the call of duty, to convert this cache into a museum. In September 1795, despite numerous obstacles, the convent granted Lenoir his request to create a museum in the halls of the Petits-Augustins and decided on its final character: the new museum was to house French sculptures and monuments, and to arrange them in strict historical order. It was this chronological concept of the exhibition that captivated international visitors most. In the enfilade of the convent, Lenoir orchestrated the dawn, evolution, decadence and restoration of the French arts from the thirteenth to the eighteenth century. Beginning with the thirteenth century hall, where a faint light enveloped the tombs of the Merovingian kings, the visitor entered adjoining halls containing exhibits from the fourteenth, fifteenth and sixteenth century, the latter displaying French sculpture at its peak - a result of the patron policies of Franz I. This led to the eighteenth-century gallery with the busts of celebrated philosophers, artists and politicians, heralding the Restoration of French art. In the introductory hall at the start of the museum circuit, the visitor was made familiar with the trajectory of French art history at a glance, from its Celtic origins up to the seventeenth century. The visit ended in the Elysium garden, where the story came to a halt: monuments and tombs largely fabricated by Lenoir of such illustrious figures as Descartes, Rousseau, Heloïse and Abelard were to transport the visitor into a commemorative and contemplative atmosphere. Lenoir's desire to achieve a complete representation of French art heritage following the Winckelmann principles was so intense that he himself set about restoring, complementing and combining, at times even ordering reproductions in the respective historic styles. The outcome was harsh criticism: was conservation of this type of monument not a form of destruction? Apart from this attack, which was partly fed by envy of Lenoir and political resentment, Stara reviews critics that argued more subtly. Here she focuses on Quatremère de Quincy, Lenoir's most ardent opponent, who went down in history as one of the fiercest museum theorists of his time, a museophobe who was responsible for closing the museum in 1816.

Stara's study is based on the well-kept and for the most part published corpus of the museum, as well as on the limited but outstanding secondary literature. Although the author does not deliver new findings on the history of the museum, its concept or in part its critique, she does provide a fine compendium of information that readers otherwise find scattered throughout numerous papers. Some of these are still irreplaceable, such as the works of Dominique Poulot, Francis Haskell and notably Andrew McClellal, who in my opinion provided the most intelligent analysis of the origins of the museum in the shadow of the Louvre in Inventing the Louvre. Stara fails, however, to pursue aspects that have hitherto gone unattended: Lenoir's scholarly and political network, his relationship with the members of the Académie Celtique, the historical and antiquarian sources with which he constructed a form of monumental national history are some examples. Accordingly she presents Lenoir as the protagonist of the museum venture but omits his mentor, Abbé Leblond, who played a major role in its development and in the transfer of antiquarian knowledge and the Winckelmann theories. Likewise the theory of the Egyptian origins of culture that Lenoir adhered to according to Stara was merely one of several source narratives he reproduced in his catalogues. The Celtic origin narrative that appears in the fifth edition of the catalogue serves here as one example.

Impressive, on the other hand, is Stara's interpretation of the Museum of Monuments as "a dialectic process of invention more akin to the making of myth, or mythopoesis" (112). This understanding should be seen as a response to the two-hundred-year-old theory that Lenoir constantly rearranged the exhibits and altered the significance of the museum in the twelve catalogue editions for opportunistic reasons and described them afresh. Apart from taking umbrage at these adaptation processes, scholars have also criticised the contradiction between the museum walkabout through (art) history and the ahistorical contemplative approach adopted in the Elysium garden, between progressive and circular presentations of history in permanent conflict with each other. Stara sees these contradictions positively: "It was precisely the combined presence of all those conflicting features, including Lenoir's idiosyncrasies and shortcomings, which allowed the project to resonate harmoniously in its totality. Being neither a scientific treatise on myth nor a full reconstruction of mythical narratives, the Museum of Monuments arguably operated as a 'work on myth'" (113) as defined by Hans Blumenberg. But this conclusion must be rejected considering Blumenberg's myth is a transfer of the basic human questions that, not unlike metaphors, begin where logic reaches the borders of knowledge. How can we speak of work on the subject of myth when the museum repeatedly presented rational-historical reconstructions of both individual exhibits and the entire gamut of art history, reconstructions that surely had a claim to historical truth and were often contradictory? For Hans Blumenberg, myths do not emerge from a sum of narratives, since each myth is per se a meaningful whole, one that is by no means at odds with other myths. Myths are not governed by the rules of rational thinking.

Stara's comparison between Lenoir's museum concept and that of his chief adversary, Quatrèmere, however, is convincing. With great vigour, she shows that in terms of theory, the two positions were not so far apart. On the contrary, both men approved of museums as educational institutions, but had different ideas about them. Hence the reader is invited to revise the firmly established misinterpretation of Quatrèmere as a museophobe and to reconsider the significance of this scholar.