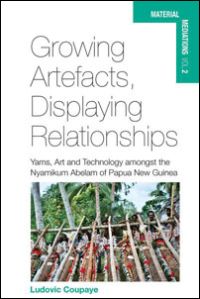 Yams, the big, rough, edible tubers, seem hardly a topic of interest to the art historian. And yet, the author of the book under consideration - a book that sets out to explore the cultivation, decoration, and reception of yams among the Abelam people of Papua New Guinea - imagines his book being read by art historians as well. If not the object of study, the methods used justify such an expectation. Though unmistakably a book about yams, it is as much a book about art and technology.

As the author makes clear in his introduction, his work is grounded in two anthropological traditions. Firstly, an Anglophone tradition that has explored the ways in which "things, objects and artworks have social lives, agencies and biographies" - a hot topic in art history as well (1). Among the studies mentioned by the author, art historians might be most familiar with that of Alfred Gell, whose Art and Agency has received a significant amount of attention in the field, and maybe also with Arjun Appadurai's The Social Life of Things. The second, less familiar tradition is mainly Francophone and deals with the role of technique, or more specifically, "the analysis of artefacts from the perspective of technical processes from which they emerge." (1) If this sounds familiar to the art historian, something like "technical art history", the anthropological interest in technique is markedly different. Technology, for the anthropologist, is a social practice; "looking at how things are made", the author writes later, "offers a particular perspective on how persons are constituted." (61)

The remainder of the introduction as well as the first chapter, primarily aimed at introducing the reader to the yam and its role in Abelam society, might be something of a tough read for the uninitiated. Flashes of the author's encounters with the land, people, and object of his study are juxtaposed with highly detailed descriptions of the yam and the manner in which it is grown. It is, however, the second chapter that might be considered the real challenge for the art historian. First and foremost, it provides an insightful overview of the discourse on technique in anthropology and neighboring fields. As the author makes clear, the historiography of this problem is one of taboos and blind spots, particularly with regard to the Anglophone literature. That this is less the case for the French tradition can be largely ascribed to the enduring influence of Marcel Mauss, who put the topic on the map with his 1935 essay on "body techniques".

Perhaps somewhat surprisingly after stressing the importance of the French tradition, when the author discusses what he takes away from all of these texts, he comes to focus on two British authors: Alfred Gell and Daniel Miller. Particularly significant is his juxtaposition of the former's concept of the "enchantment of artworks" and the latter's of the "humility of things". If these positions might seem to be in direct opposition to each other, Coupaye describes them as the two sides of the same coin. "Both", he argues, "relate to the same phenomenon which comes from technical processes being instantiated - made instant, tangible - in artifacts. In the first instance, the question of the object's coming-into-being is brought to the foreground because of the cognitive 'problems' it poses to immediate interpretation. In the second instance, the same question is left in the background, its answer assumed, and the problem of coming-into-being is hidden by the thing's mundanity." (85)

When in the following chapter the author comes to analyze the actual cultivation of yams he relies on a descriptive technique known as chaîne opératoire, or, in Pierre Lemonnier's translation, "operational sequence". More a methodological tool than an actual theory, it involves the breaking down of a process into step-by-step actions. Though seemingly straightforward, Coupaye's nuanced discussion of the method's limitations suggests that we should be cautious to embrace it. Hardly ever can the art historian rely on the "fine-grained observation and notation" (99) that the author deems a requirement. Sources, too, it may be inferred, should be approached with caution; when we read, for example, Vasari on technique, we should ask if his remarks are to be considered as prescriptive, descriptive, or - as is most likely - something different all together. A final limitation of the operational sequence is that thinking in terms of a sequence conceals parallel processes. And indeed, what remains from the author's detailed analysis is, rather than a formal list, a "meshwork of interactions [coalescing] into its visible, concrete, materialized result: a yam." (155)

The subsequent two chapters build on previous descriptions, aiming to lay bare precisely how the connections in this "meshwork" gain significance and are evaluated as part of the long yam ceremony. In order to conceptualize these connections, the author refers to the notion of "collectives" as used by Bruno Latour and further developed by Philippe Descola. Contrary to the concept of society, which applies to human agents only, that of the collective also includes artefacts, thus assembling the human and non-human in a "network of specific relations" (161). As a result of this grouping, the question arises to what extent non-human agents can be included in a discussion of technique, a point that is further explored at the end of Chapter 5 under the label of "efficacy". Reflecting on the ideas of, again, Lemonnier and Latour, the author shows how scholars have, in different ways, challenged the idea of a "universal rationality behind technical systems and their products [...]." (241) By contrast, he suggests a focus on emic discourses of efficacy, thus "bridging the gap between a so-called pure technical side and a 'ritual' one." (245)

The last chapter, finally, returns to the object of the yam itself, discussing its properties as food, currency, and, in a rather dense argument, its status as "image". The latter discussion, especially interesting for the art historian, again takes issue with the work of Alfred Gell, focusing on the question of the yam's "active social role", or in Gell's terms, its agency (269). Particularly significant is Gell's concept of the "technology of enchantment", which, as we have seen, seeks to explain the "halo" of the work of art from the "the cognitive 'problems' it poses to immediate interpretation [...]." Coupaye's main critique of Gell is that by focusing on the moment of interpretation he downplays the agency the raw material - in this case the yam - may have of its own. In a subsequent step, the author asks what incites people to interpret to begin with, thus returning to the opposition of Gell's enchantment and Miller's mundanity. One might ask whether the author's reference to the tricky concept of aesthetics is helpful here. Nevertheless, his discussion is of central importance. By asking the question of what is needed to pay attention to an object as a "work" to begin with, the author comes to explore the moment in which an artifact becomes something we could define as work of art. The question forces the author to leave the object itself and inquire into the manner in which it is socially framed - art, we may conclude, is all about the frame.

Characterized by a level of methodological reflection seldom found in the history of art - we've been able to discuss only a fraction here - the book gives art historians a lot to think about. Indeed, the questions the anthropologist stumbles upon have not infrequently been taken for granted by art historians, thus indicating some blind spots of art history too. This is a book, then, that, though bewildering at times, deserves to be read.