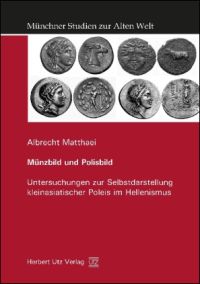 Matthaei offers a scholarly treatment of the iconography of silver and copper coins struck by thirty-nine Greek cities of Western Asia Minor in the late Hellenistic Age. The book is organized into five sections. The first (17-17) is a learned review of the debate about why cities selected coin types and legends, either as denominational marks and guarantees or as symbols of this sovereignty. Discussion is restricted to the period of ca. 200-30 B.C. This is a summing up of the scholarship and sources rather than an original thesis. The second part (18-92) is a description of coin types and legends for each of the thirty-nine cities. The analysis comes in part 3 (92-106), on the purpose of types and legends, and in the conclusion, part 5 (131-135). Section 4 (106-134) is a general discussion of the meaning of specific types.

Matthaei has worked primarily from published holdings, and monographs, so that his study is more of a presentation of the state of the question rather than a comprehensive corpus. He has not worked through unpublished holdings in the major coin cabinets, the market (from published catalogues or on line) or even from many excavation reports. But this research would have added marginally to his main purpose which is an iconographic study.

Matthaei has narrowed his focus to late Hellenistic civic coinages, but the study might have profited from a broader context. Even so, the monograph is a valuable contribution to understanding long neglected coins of the late Hellenistic Age, especially the fractional copper and bronze coins. This is the period of the so-called "Ionic Revival" when a number of cities undertook or completed ambitious building programs such as the temple of Athena at Priene, the Didyaion by the Milesians, or the temple of Dionysus at Teos. Cities also expanded their festivals, and the large silver coins minted by cities of the Troad were, in part, struck to meet costs or distributions at the festival of Athena Ilias. [1] During this same period, Rome smashed the great Macedonian monarchies, and so ended the dominance of regal coinages. Hence cities had the incentive and need to coin their own money.

Perhaps the main short-coming of Matthaei's study is the limited discussion of coins as economic instruments, for this role influenced coin designs. Matthaei, in fairness, reviews the sources and scholarship. He makes little use of the decree of Sestos (ca. 130 B.C.) as a source for the choice of types and legends or the profit motive in striking civic coins. He relies upon the thesis of Martin, namely coins were expressions of the sovereignty of the polis, and so types and legends were foremost chosen to project a specific civic identity. [2] He also makes no use of other sources about this subject outside of his chosen period that support this view. Instead, with Martin's axiom as a given, he concentrates on reviewing the iconography of each city's coins (18-92), and generalizes on the choice of coin types in a separate discussion (107-131). His main conclusion is correct (93). Greek cities in the third through first centuries B.C. did not use the design of their coins to mark specific denominational value as was clearly the case at many cities during the Principate. [3] But then they did not need to do so given the small size of many of these cities. For example, the population of Priene residing within the walls is estimated at 5,000 in the fourth century B.C. The number of voting citizens was comparatively few, and all citizens likely knew their money, and what it was worth. Hence, types and legends were selected that were, in the language of the Sestos Decree, appropriate (Εὔδoξoς). To be sure, this consideration was linked to advertising the city's "freedom and autonomy" (ἡ ἘλΕυθΕρία κα ὶ ἡ αὐτoνoμία). But coins were a small, and often stereotyped, medium for projecting these civic values, and there were other more effective means of disseminating these values.

Since coins were first and foremost fiscal and economic instruments, many of them, especially the fractional aes, carry traditional, often stereotyped designs, for ease of production. Matthaei does not consider how the market demands for coins and the technology of production could have dictated many designs. Small base metal fractions, struck on heavy dumpy flans, offered little scope for the engraver in contrast to the broad civic coins (based on the assarion) struck in the second and third centuries A.D. The silver tetradrachmae were produced by well trained engravers, and their style and content are far more pleasing than those of the fractional bronze coins. The wreathed tetradrachmae (stephanophoroi) of Cyzicus, Temnus, or Aegeae are remarkable in comparison to their base metal fractions.

Therefore, it was convenient that the same types were used for bronze coins of different denominations, because value was determined by the size (diameter) of the coin. The wreath motif on silver coinages came to be regarded as marking silver coins of good purity (rather than specific value), and so spared vendors, buyers, and money changers the need of assaying the coins. From 168 B.C. on, Athens popularized the type when she instituted the New Style tetradrachmae, but the motif was likely Attalid in origin. [4] In the opinion of this reviewer, Eumenes II marked the new regal cistophori, light weight tetradrachme (by quarter of the Attic standard) to meet war costs in the 190s B.C. [5] Cistophori of fine silver thus easily passed as Attic tridrachmae by weight.

The key point to surmise from this study is that citizens of these Greek cities knew what their coins should look like, and what the value of their coins should be. Fractional base metal denominations circulated within a relatively restricted radius of their city of origin. Matthaei could have brought out this point more clearly by consideration of finds from excavation reports. Hence, marking these coins with value marks was not a priority. The need for clear denominational marks on base metal factional coins arose in response to the proliferation of civic currencies under the Principate, and the circulation of these coins, struck on different standards, far more widely under the Roman peace. The system of werkstätte manufacturing these coins, also influenced the choice and use of types to denote denominational value. [6]

Therefore, Matthaei rightly concludes that cities after 200 B.C. resumed striking their traditional coinages as a means of asserting their sovereignty. Each city was a polis, and the coins projected by their specific types its cherished political values (ἡ ἘλΕυθΕρία καὶ ἡ αὐτoνoμία). It may be more correct to conclude that these Greek cities, given their fiscal and economic needs for coinage after 200 B.C., used this need as an opportunity to circulate coins affirming traditional values.

Matthaei does not explain why he selected the thirty-nine cities other than they are early Greek foundations (except for Pergamum). They are located in Hellespontine Phrygia, the Troad, Aeolis, or Ionia. He omits Greek cities of Bithynia, the Thracian Chersonesus (notably Sestos), and on the European shores of the Propontis. Also omitted are the cities of Doris such as Halicarnassus, Iasos, and Ceramus, as well as Greek cities of the southern littoral of Asia Minor: Phaselis, Perge, Aspendus, Sillyum, and Side. All these cities consciously styled themselves as Greek, and many sought the approval and confirmation of their status from Alexander the Great, the Diadochoi, and then the Ptolemaic or Seleucid kings. Expanding the roster of cities might have just multiplied the number of examples without altering the conclusion. Perhaps, more telling would have been the comparison of the coinages struck by Anatolian cities and leagues that styled themselves as Hellenic (notably the Pisidian fortresses Termessus and Sagalassus, the Carian city Aphrodisias, or the cities of the Lycian league). All these towns turned themselves into Greek style cities, and issued civic coinage during this same period. The coinages of these communities too reveal the primacy of a Hellenic civic identity. The inclusion of these coinages would have led to wider considerations such as how the public culture of Anatolian cities became increasingly Hellenic. Matthaei could have also stressed more how cities that obtained Roman colonial rank, notably Parium and Lampsacus, used Latin legends and Roman types to assert a new Roman identity that was legally superior to that of a Greek polis. Hence, at the end of this period, Rome introduced a new coveted rank, and the coinage reflects a process that would culminate in the transformation of Greek cities, including many Hellenized Anatolian ones, into the provincial Roman cities of the Severan Age.

The book should be read more for its insightful details rather than its overall conclusion. For example, the rare coinage of the island polis Tenedos (43-44) is well elucidated. The rare wreathed tetradrachmae carry on the obverse an unusual janiform head, while on the reverse is a double axe. The types on the fractional coins were unchanged since the fifth century B.C. Temnus is typical of a number of the lesser cities in Matthaei's group (notably Poimaneon, Skepsis, Priapos, Dardanus, and Neoteichus). These cities struck coins with traditional types whenever bullion and the means were available. Yet, this was apparently so even for the larger and wealthier cities (notably Cyzicus, Parium, Lampsacus, Abydos, Ilium, Tenedos, Mytilene, Myrina, Aegeae, Cyme, and Smyrna). These cities struck far more varied coinages, especially when they operated as royal mints, issuing coinages in the names of Alexander the Great, the Diadochoi, Lysimachus, and then the Seleucid kings. [7] Yet, even these cities usually minted civic coins with types and legends that were revivals of earlier designs from at least the early sixth century B.C. None of the coinages was truly exceptional. Those cities striking wreathed silver coins (stephanophori) employed well known types easily recognized in regional markets, such as the tetradrachmae minted by cities in the koinon of Athena Ilias. These coins met building costs, or were put into circulation as distributions at festivals. The economic role of these wreathed civic silver coins explains, in part, their conservative types. Wreathed coins circulated widely in the Aegean world, and their use could be compared to the Athena/Nike tetradrachmae struck by Side in the same period that circulated in Seleucid Syria. These coins thus passed at par with the Athenian New Style tetradrachmae (at least this is implied by the Delian inventories), which prevailed as the currency of the Aegean world after 164 B.C.

Second, his conclusions are not surprising, but they are reassuring. It is the first step to a corpus of civic coinages in the Hellenistic Age. Such a corpus will prove indispensable for historians studying wider questions of Hellenistic trade and urban economy, and the economic impact of the Roman conquest. This book will reveal how coinage evolved from the royal and civic issues of the Diadochoi to the civic and provincial coinages in the time of Hadrian's Panhellenion. It is hoped that Matthaei himself will treat other Hellenistic city coinages with emphasis on both the iconographic and economic roles of these coins.

Finally, the bibliography is excellent. The main complaint is with the publisher for the mediocre quality of the plates, and the adequate, but minimal, map. The coins have been reduced to the same small size, apparently to save printing costs. The images should either be actual size or, if enlarged, they should preserve the relative size of the different denominations. The coins are difficult to read; the beauty and visual impact of the large silver tetradrachmae (in comparison to the base metal fractions) is lost. Many of the illustrations that have been taken from SNGCop are of such poor quality that at times they are illegible. The map is adequate, but some sense of topographical features would have assisted in revealing how the geographic location might have influenced the production of city coinages.

[4] See D. M. Lewis: "The Chronology of the Athenian New Style Coinage," NC 7, 2 (1962), 275-330, for the now widely accepted low chronology for the Athenian coins - a revision of the high chronology proposed by Margaret Thompson.