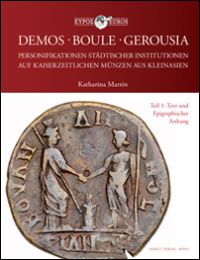 Martin has written the definitive study on the personifications of the civic institutions Demos, Boule, and Gerousia as they appear on bronze coins struck by Greek cities of Asia Minor during the Principate. The catalogue is well designed and annotated. Obverses dies of the personifications which are shared by different cities are clearly indicated. Martin also treats the use of the personifications of the Roman Senate (Hiera Synkletos) and the Roman people on the same coinages. Future publications will add new examples or specimens, but they will not alter the organization of the corpus or Martin's conclusions. Those scholars concerned with the historical significance of these coins and their iconography may opt to read the final chapters (7-8) first. Numismatists, however, will need to read carefully the discussions of each of the three personifications as both obverse and reverse types (chapters 3-6). These chapters contain a wealth of details about individual coins, corrections of known coins, and interpretations of specific features of the iconography. In either case, the book should be read in tandem with the catalogue which is published as a separate volume. The publisher should be commended for producing plates of the coins to actual size and of such a quality that die links or stylistic similarities can be discerned when new specimens are compared to Martin's plates. Finally, Martin has collected and published all the relevant epigraphic testimonia to date (251-288).

The personifications of Demos and Boule can be traced back to depictions on Athenian relief sculpture of the fifth century B.C. In the Hellenistic Age, public and cult statues of both personified institutions reveal a well established iconography before the imperial age. In contrast, depictions of Gerousia (who appears far less frequently) dates for the Roman imperial age, and these are almost exclusively found on coins. The numismatic record is clear. The three personifications are overwhelming depicted on coins minted in the province of Asia. Many of these cities, located in Lydia, Phrygia, and Caria, proclaimed Macedonian or Greek origin. The municipal authorities commissioning these coins consciously employed well established visual and epigraphic conventions to present their cities as a polis, which Aristotle would qualify as a Hellenic community with a constitution that followed the rule of law. The proliferation of these coin types date from the Antonine Age. These coin types are but one of several indices of the rising sense of civic consciousness at least among the notables who dominated these institutions and commissioned the coins. At the same time, cities in these same regions added on their coins lengthy eponyms, featuring the names of magistrates associated with the coinage, even at the expense of abbreviating or crowding the ethnic on the reverse. [1] Engravers responded to rising demand by organizing themselves into ateliers to mass produce standardized obverse dies of portraits of the three personifications (along with that of Hiera Synkletos). [2] The desire for more city coins featuring portraits of each city's tutelary gods and institutions was inspired by the ideals of the Second Sophistic and the Panhellenion founded by Hadrian. These cities outside the Hellenic heartland of the Aegean world, proclaimed more intensely these archaizing values along with credentials to be counted in the community of civilized Greek cities. From the Severan age on, cities still featured these civic personifications along with other traditional images to stress continuity with the imperial peace of the Antonine Age.

To this generally accepted interpretation of civic coins and politics under the Principate, Martin strengthens the thesis that the content of civic coinages was local and specific. The iconography of these personifications differed from city to city, and usually several influences were at work. Martin poses the plausible suggestion that sex of each personification was determined by grammar; hence Demos was invariably male, and Boule was usually feminine (Martin, pp. 13-14). The two coin portraits taken together were the visual rendition of prescripts of public decrees of Greek cities: "ὁ δῆμoς καὶ ἡ βoυλή" followed by the city ethnic in the genitive.

On coins of the second and third century, the portrait of Demos was depicted in several guises as beardless heroic youth sporting diadem, laurel wreath or long flowing locks, or as a bearded mature man. The youthful portraits were inspired after eponymous heroes, already well established on Attic reliefs of the late Classical Age, and heroic portraits of Alexander the Great (Marin 10-33). The cities of Kyzikos and Dokimeon depict the portraits of invented eponymous heroes Kyzikos and Dokimos, whose features closely resembles those of Demoi on coins of other cities so that it is reasonable to surmise that engravers looked to statues of eponymous heroes to model the coin portraits of Demos (Martin, 53-55). It was logical for Demos, the collective citizen body, to resemble the city's eponymous hero because all citizens were his descendants. The bearded coin portraits of Demos share features and attributes with those of Zeus at certain cities. In addition, Martin has demonstrated, in the opinion of this reviewer, that Greek cities in Asia Minor also looked to Roman iconography, adapting their Demos to the Genius Populi Romani, featured on late Republican denarii (Martin, 33-36). By the end of the second century B.C., denarii penetrated the markets of the Aegean world and Western Asia Minor. Cults to the genius of the Roman people were instituted perhaps in tandem with the well documented cults to the goddess Roma (Θεὰ Ῥώμη). [3]

The portrait of Boule was usually female, veiled and draped, and this iconography likewise dated to the late fifth century B.C. The diadem and royal attributes often associated with the coin portraits of Boule were inspired by the iconography of portraits of Hellenistic queens, notably Olympias, the mother of Alexander the Great (whose portrait was widely disseminated on Roman medallions and contorniates), Ptolemaic Queens, and Philistis, wife of the tyrant Hiero II of Syracuse (Martin, 113-123). The far less frequent bearded male Boule was modeled after Zeus Boulaios and, in the third century, after the bearded portraits of emperors.

The personification of Gerousia, as yet, has no precedents in the Classical or Hellenistic visual arts. Coins bearing portraits of Gerousia date from the Flavian Age, and the obverse portraits show the even more variation that those of Boule (Martin, 141-151). On coins of Antiochia ad Maeandrum and Aphrodisias, a youthful male Gerousia, similar to Demos, was featured on some coins. The personification likely represented different institutions at different cities. At Ephesos, the Antonine benefactor C. Vibius Saltutaris notes in his endowment that he dedicated a silver statue to sacred Gerousia by which he meant the boule of the city (Martin, Demos 4, 257-259). The boule might also been intended when M. Ulpius of Eurykles struck medallion sized bronze coins featuring the Disocuri (almost certainly a statue group donated by Eurykles) on the reverse with a dedicatory inscription to the Gerousia of Aizanoi (Martin, Aizanoi 6-7).

The obverse portraits of Demos and Boule, along with those of Tyche, tutelary gods, and Hiera Synkeltos, became routine for ease of mass production in the second and third centuries. Martin's catalogue adds new examples of cities sharing obverse dies bearing these personifications. Hence, the dissemination of features and attributes owed much to the mode of production by the workshops of engravers (Werkstätten) first elucidated by Kraft. Coins, dies, or engravers moved along well established local or regional trade routes as ever more cities demanded their own bronze coinage.

Martin notes that the reasons and occasions why cities issued coins featuring Demos or Boule are best indicated on coins carrying the personifications as standing figures (159-192). For example, when the figures Demos, Boule or Gerousia were posed in specific scenes (whether on the obverse or reverse of coins), they celebrated specific events. At Pergamon, coins of 5-4 B.C. depict the proconsul M. Plautius Silvanus crowned by a bearded Demos, while the reverse carries the cult temple of Augustus (162-163). The coins refer to a vote of honors to a popular governor combined with celebrations to the genius of the emperor. Similar specific scenes on coins of Aizanoi and Aphrodisias are plausibly explained as celebrating favorable rulings recorded and prominently displayed as public inscriptions, namely the decree of the proconsul Mettius Modestus and confirmation of rights by the emperor Gordian III (163-164), respectively. Even in the absence of inscriptions, similar scenes can plausibly to explained as celebrating specific political or religious events.

Martin concludes that, even if many of the types were routine, the celebration of Demos and Boule on city coins carried powerful political and religious appeals (193-211). This conclusion is borne out by Martin's statistical analysis of the surviving coin types and minting authorities (218-219). Three out of four cities striking coins carrying one of the three personifications were in the province of Asia (with 15% of the total in Caria, 23% in Lydia, and 40% in Phrygia). It is also significant that cities featuring as the obverse type on their coins only the portrait of Demos were 35.5% of the total, while most cities featured both Demos and Boule (58%). Few cities struck coins carrying only the obverse portrait of Boule (6.5%). The pattern reflects the political values of the leading members of the council (the decemprimi in Roman law). This same value also motivated the issuing homonoia coinages in the province in Asia. The coin types honored the two political bodies to which leading magistrates displayed their philopatris and philotimia: the assembly, the sovereign voting citizens (even if franchise was restricted), and the council, the deliberative body of peers.

Finally, Martin judiciously explains the well know practice of matching specific obverse portraits (the Augustus, empress, the Caesar, Hiera Synkletos, Demos, and Boule) with a specific denominations (chapter 8, 231-241). The practice varied from city to city, and is particularly easy to see on coins of Septimius Severus. In a number of cities, the portrait of Demos or Boule could grace the obverse of the same denomination, suggesting equal deference to both bodies. At many cities, the choice of obverse portrait reflected the political hierarchy. Hence, the portrait of Septimius Severus was often on the largest denomination, while those of Julia Domna and his sons Caracalla and Geta were on middle denominations. Special presentations coins, such as those at Stratonicea, often carried face to face double portraits. It is as yet difficult to estimate the overall relative production of each denomination, but even a cursory die count of the coins of Aphrosidias or Smyrna points to the obvious conclusion that the middle and fractional coins were usually struck in greater numbers. [4] Hence, the images of Demos and Boule on coins were frequently seen in city markets. Given the value of the higher denominations, they were struck in more limited numbers. They were also less likely to be casually lost so that high value denominations have usually survived in hoards whereas many more specimens of middle and factional pieces have surfaced in excavations. Yet, even this convention could be changed whenever local circumstances dictated a different choice of obverse type. At Laodikeia, the youthful portrait of Demos graces the obverse of medallion sized coins intended to be handed out at civic festivals that were intended to honor the assembly of citizens (Martin, Laodikeia 31/1).

In conclusion, the work is an impeccable piece of meticulous scholarship, and its conclusions, while not surprising, are reassuring, and provide numerous clarifications and details that enrich our understanding of the political, religious, and economic life of the cities of Asia during the Principate. Hence, Martin's work will long remain the definitive work on the subject.