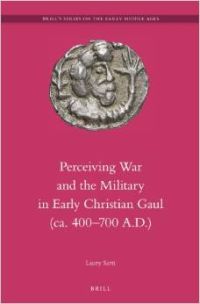 Perceiving War is based on the author's Hamburg dissertation. It provides itself in its conclusion a clear summary of its findings and positions - one of the advantages of the German dissertation. After an introduction (1-11), it sets up the context (Gaul ca 400 to ca 700, 13-45). The following chapter (numbered three, 47-84) discusses intelligently the sources and their issues - heterogeneity over time, as the dominant genres to which the surviving evidence belongs change from century to century, and the places of production switch from South to North; the author mentions, but cannot definitively solve (who has?) the classic problems inherent in the interpretation of archaeological remains. Several conclusions however stand: that burials with arm prove at least the cultural prestige of warfare and armed violence, and that this prestige increased over the period considered. Another conclusion (proposed in a fourth chapter devoted to perceptions of war and warriors, 85-151) is that by the sixth century one sees that opinions about warriors and war-making become much more favorable. While in the sixth century the audience of letters and poems had preferred civil and literary achievements over warrior qualities, this disappeared in the seventh. Although one cannot quite reconstruct the human experience of armed violence, one can see, at least, both that peace (understood as the absence of violence) was a value, yet that there are very few Merovingian-era expressions of a desire for peace. Military heroism picks up as a value in the sources from the mid-seventh century; the overwhelming ecclesiastical provenance of our sources, however, means that in critiques of rulers and high military men, inability at arms is rarely employed to besmirch or demean, unlike other, more moral or Christian defects.

Interesting is also the following: miles disappears in its earlier Roman usage of denoting a member of the military caste; likely, proposes the author, because it had denoted coerced service and thus lack of freedom. Usage in other fields (for example, service to God) suggests indeed that the avoidance of the term for warriors was purposeful. It was replaced by the intensive usage of words such as bellator, praeliator, pugnator, words also employed metaphorically or in a spiritual sense to denote prelates, saints, and spiritual warriors (as we learn elsewhere in the book, including in a final chapter devoted to Christianity and the world of war, 315-357). While the early medieval model of society held that warriors and ecclesiastics (plus monks) were distinct and unbridgeable orders, the usage of military terms and images to adorn members of the latter (plus God and His saints), and their spiritual violence, indicates (329) that "authority [...] has become unthinkable as [...] detached from the military". The author sees here the symptom of a sharp reevaluation upward of the warrior status and function, in contrast to the demeaning status of the ordinary professional soldier of late Antique Rome, and places it in parallel with the archeological increase in weapons as grave goods. The elite identified itself strongly to its warrior function; so did, to a lesser degree, the general population. The author's linking of weapons as grave-goods and weapons as objects involved in the striking of fidelity, alliance and friendship pacts is also felicitous. This is fairly novel stuff; in the same chapter five (153-314), less groundbreaking is the statement that "military success [...] became a crucial factor in the establishment and maintenance of lordship" (194).

Underlined is, further, the disappearance of the boundaries between public and private armed violence, with similarities in motivations and procedures (e.g., the choice of a battlefield, the duel, oaths and compensation, and the notion of divine verdict through battle).

An obligatory flirting with gender history takes the reader to the theme of the warrior and maleness - characterized by physical beauty and integrity, names, prowess in violence and demonstrations of strength. The derivatives of fortis abound as terms of praise. In further analysis of the sources' vocabulary, the author reminds us with Karl Bosl of the important rise of the term utilis, denoting the ability to prevail and aptitude as a warrior. In parallel, honor loses its Roman meaning of social esteem based on civilian habitus; with the Merovingian era, it denotes either an official function or the glory derived from this function, often involving armed violence.

The text still bears the traces of the plodding style of PhD theses, with repetitions. Formal infelicities include here and there imperfect English (no capital sin for a non-native speaker) [1], repetitions [2], small errors (for instance, Praetextatus bishop of Rouen became Praetextus; and Belisarius appears also as Belisar), and approximations or mistakes in translation from Latin. [3] The footnote apparatus is quite heavy, with many citations of banal statements from other historians that hardly help the argument. There is here as in many dissertations a desire for totality (and therefore lengths) that makes the book much too long. Subsidies to publishing houses (in this case from the Luxembourg Fonds National de la Recherche) do not foster the discipline of economical writing; nor does the publishing house seem to have been interested in proper copy editing. Brill Publishers may not care (it lives from library acquisitions and public subventions); this reader does.

What is the balance sheet? It is a difficult book to assess. This reader, on the strength of basic knowledge of the Early Middle Ages, was not surprised by many of its disquisitions and conclusions, and found it oftentimes not a stimulating read. He also found annoying the author's habit to put herself on a chronological par, using the expression, "similar", with established scholars who came - earlier - to the same conclusions as her own. Does it make sense to write "similar Graus" when noticing that "no Merovingian saint [...] was ever explicitly reported to have been involved in any act of physical violence" (338)? František Graus, a giant in the field, wrote long time ago, in 1965. Furthermore, there may be no book devoted solely to warfare and warriors in Gaul between 400 and 700, but much of what it presents is familiar terrain. Seen from a positive angle, this means that the book is based on broad reading in the primary sources and recent historiography, which induces some confidence in the author's positions, and makes it a resource for other scholars interested in researching or lecturing on armed violence. In these many pages, there are very interesting finds, some of which have been detailed above. And Dr. Sarti positions herself in a still heady debate, staking clearly her main contribution: that late Roman and Merovingian Gaul saw a massive penetration of war and armed violence, of warlike attitudes, and of war-related metaphors (while differentially, in all spheres of society), and that this penetration proceeded slowly. This indicates, she proposes, that the so-called transformation of the Roman World was neither smooth nor catastrophic. For Laury Sarti, the thick presence in the sixth and seventh centuries of war and violence, conjoined to the militarization of many dimensions of life, means that there is a fundamental (even though only slowly gaping) caesura between Antiquity and the Middle Ages? Her dissertation advisor, the recently retired eminent Hamburg medievalist Hans-Werner Goetz, has intervened in a highly comparable scholarly discussion. [4] The heated controversies over the so-called "feudal revolution" - whether one can speak of a caesura in the fabric of France circa the year 1000 - led to the mediating notion, not accepted by all, of a slower "feudal mutation", analogous to Dr. Sarti's gentler chronology for the transformation of the Roman World. More importantly, the feudal revolution debate should make the author and her readers reflect, in the wake of the scholars involved in the 1994-1997 Past & Present exchanges [5], on proper criteria and adequate evidence for fundamental social, political, or cultural change.