Lawrence G. Duggan: Armsbearing and the Clergy in the History and Canon Law of Western Christianity 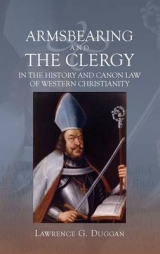 Duggan begins with a very clear statement on his purpose in writing. 'The argument of this book is simply that, contrary to what is widely assumed, the clergy in Western Christianity (at least in the Roman Catholic and Anglican traditions) have not been categorically forbidden to bear arms since the High Middle Ages (c.1100-1300) and are not today.' (1) It has indeed become a commonplace that the clergy were, and are still, required by their church to follow a completely non-violent path. Yet it is clear that clergy have served in arms, and not simply in seeing to their own defence.

The distinctive characteristic of Duggan's book and indeed its main strength is that it covers the whole period of Western Christendom, from the early church to the present. The author's main source is the formal law of the church (ecclesiastical or canon law) but he also draws on treatises and historical narratives, and is at pains to emphasise how church law was put (or not put) into practice. A particularly important point is that the law needed to be interpreted through local synods and councils. Even in the modern world too, exceptions might be made for individuals and for particular situations. The book is therefore exemplary as a study of how theory and practice relate to each other. Whilst the church is often seen to be categorical rather than indefinite, this book reveals the complexities and dilemmas faced over the centuries.

Duggan's approach is wholly systematic. After setting out his intentions and explaining the scale and difficulty of his source base, he proceeds in the first part of chapter 1 to assess actual clerical participation in warfare from the early middle ages to the twentieth century. In his consideration of the early medieval period, he points to differences across the various embryonic European states. This cross-cultural approach indicates how localised the Western Christian church was in its first century, and also how within the violent upheavals of the period, it was impossible for the clergy not to be involved as leaders and participants. Indeed, they were often expected to be. Yet this was not the case in the First Crusade, where Pope Urban II forbade those committed to spiritual warfare to participate. This reminds us of his intention to engage secular interest in crusade in its early phase. As Duggan shows, the 'fighting cleric' was prominent in the later middle ages. Examples are given, some infamous (such as the leadership of Henry Despenser, Bishop of Norwich, in an invasion of Flanders in 1383, under the pretext of crusade against schismatics), others less well known to English readers.

In chapter 2 he again adopts a chronological approach in considering what judgements ecclesiastical writers have expressed about the clergy and armsbearing. As he shows, it was a matter of contradiction and debate, where there was not one simple view or linear progression. Some writers praised participation in war (the archbishop of Canterbury, for instance, praised Despenser for his vigorous conduct, and claimed divine favour for it), others criticised it, not least Luther, whose views were moulded not only by his reading of scripture but also by contemporary reactions to the career of Pope Julius II. As Duggan's title for this chapter summarises, there were as many different opinions as there were writers.

In chapters 3 to 5 he provides a survey of the canon law of the Roman Catholic church. Most of this concerns the medieval period, but chapter 5 closes with seventeen pages on post-Reformation canon law. Duggan points out that the early church already had a dilemma on whether 'pacifism or non violence was at the core of Jesus' message' (91). In the eleventh century church reform armsbearing by the clergy was condemned more frequently than ever before at a multiplicity of synods and with papal support. Yet even here, there was a lack of consistency in expression. What the reformers had in mind fitted with their general ethos that the church should not be subject to lay control. Therefore they 'had primarily in mind the bishops and abbots who commanded troops in obedience to the will of secular princes' (101). But from the time of Pope Alexander III (1159-81) 'the popes accepted the applicability of the right of self-defense to the clergy' (137). Duggan shows how the Roman law (as revived in the eleventh century) and canon law coalesced as well as contradicted each other. Indeed, this chronological survey of canon law again emphasises the contradictions and complexities of ecclesiastical pronouncements. There is certainly no linear progression. The church also faced the difficulties of orders such as the Templars for whom military activity was central to ethos and existence. The level of debate is also seen in the Decretum of Gratian, a monk of Bologna. Whilst his work is influential it was never official church policy but a treatment of thorny problems, of which clerical violence was one. By the later middle ages there was much variation across the dioceses of Europe because of 'the variety of laws and interpretations emanating from the popes, the ecumenical councils and the canonists on this intricate topic' (150). In some edicts armsbearing was forbidden and clergy might be punished, yet exceptions, for instance when travelling, were common.

Chapter 6 considers the position in England specifically. Here the medieval church 'seemed to cleave more faithfully to the ancient ban than did any other in Europe' (181). Yet again exceptions were created. Walter Cantilupe, bishop of Worcester (1236-66), for instance, banned the clergy from carrying weapons unless 'necessity clearly requires defensive arms' (182). What is particularly interesting in this chapter is the inclusion of discussion of the impact of the Reformation. Despite the break with Rome, essentially canon law, expelled from the universities, simply moved to the Doctors' Commons. Clerical use of arms in necessity continued. The articles of Religion of 1553, which have formed the core of Anglican practice ever since, allowed all Christians to wear weapons and serve in lawful wars: there was no stated exception for the clergy (204). The Anglican church has never attempted 'to impose even a half-hearted prohibition on armsbearing by the clergy' (205). Duggan argues that it had no reason to do so when it was subject to secular authority by law. But this did not remove what he calls 'muddle'. In the First World War there was some debate on whether priests or even theological college students could enlist. One layman, Lewis Dibdin, claimed that earlier church laws forbade them to bear arms, and there were debates in parliament as well as in convocation. Whilst the Archbishops' Commission for the reform of canon law, which reported in 1947, was keen to prevent clergy from giving themselves to occupations, habits and recreations which did not befit their sacred calling, there is still no ban on armsbearing by Anglican clergy.

Duggan admits that his book is 'intended primarily for scholars' (ix), but that he hopes it will also be of interest to general readers. It touches on a wide range of topics and dilemmas. The book teams with examples and is based on an impressively wide range of reading. A general reader might find it difficult to use in that, rather than being strictly chronological, it covers the same periods in several chapters with different emphases. But it undoubtedly shows how complex the problem of armsbearing by the clergy has been in the past and in the present.