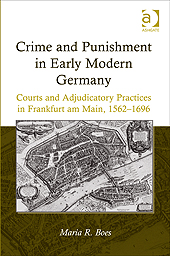 From the early 1990s onwards a 'crime wave' swept across the German speaking historiography. The vast output of monographs, volumes and journal articles that dealt with criminal behaviour and court records could even be described as a 'crime tsunami'! In its initial phase the new interest in the history of crime and criminal justice focused primarily on late medieval and early modern towns. Issues of gender, marginalised groups and the lower echelons of society attracted particular interest. Hence, the monograph of Maria R. Boes could draw on rich research in the field. Her book is for the most part based on handwritten court records. The outline represents a somewhat classic disposition with introductory remarks on the socio-economic and religious background of Frankfurt am Main (chap 1), followed by remarks on the legal setting and the practices of Frankfurt's criminal court(s) (chaps 2-3). The guiding questions focus on the judicial treatment of women (chaps 7-9) and marginal groups, such as gypsies (chap 4), Jews (chaps 5-6) and soldiers (chap 11), before moving on to specific forms of deviance, such as infanticide (chaps 8-9), sodomy (chap 10) and suicide (chap 12).

With regard to the diverse and highly differentiated judicial landscapes of the Holy Roman Empire, it is rather bold to give a book on Frankfurt am Main the title 'Crime and Punishment in Early Modern Germany'. Moreover, the time span between 1562 and 1696 certainly cannot be taken to stand for the whole early modern period. The reason for the selection of this time frame is merely that Boes's key source, the Book of Punishments ('Strafenbuch'), purely by chance, starts in 1562 and ends in 1696. As regards the offences considered, there is no doubt that infanticide, suicide and sodomy were significant types of early modern delinquency in that their study reveals underlying ideas and perceptions of the time. But the most numerous offences dealt with by Frankfurt's criminal courts are left out: namely, theft and other property crimes, physical assault and brawling.

In order to gain substantial information about both the practice and the judicial treatment of these offences, it would have been necessary to scrutinise a great number of the all-encompassing criminal dossiers ('Criminalia') in Frankfurt's city archive. Boes knows this source and makes use of it, albeit only in the later chapters of her book. The fact that she omits the 'Criminalia' in her analysis of the judicial practices of criminal courts (chap 3) leads to some misunderstandings of early modern criminal justice in general. While Boes rightly states that criminal justice was based mainly on crime reporting by the inhabitants of Frankfurt, she overemphasises the role of "general gossip" and "rumors" (55) and overlooks the fact that most communication in criminal courts was started by an accusation of an individual. The influence of the burghers on the outcome of the trial, in particular by means of pleas (supplications), is underestimated. Due to the preference given to the 'Strafenbuch', rituals of capital, corporal and shaming punishment in public are exaggerated, while the less spectacular penalties regularly meted out by the courts, such as monetary fines, reprimands and banishments are not given due consideration. Furthermore, the decision to omit cases of everyday interpersonal violence (as recorded frequently in the 'Criminalia') leads to questionable interpretation. Thus, the sentence against two Jewish men after a quarrel with a soldier in 1683, in which the latter was injured, is presented as an example showing "that Jews experienced increasingly unfair judicial treatments" (113). However, the sentence in this case, banishment from town and a monetary fine, was rather mild and of a type very often imposed on the culprits in a case of physical assault. There can hardly be any doubt that the judicial system in practice was biased, in the case of Frankfurt, in favour of Lutheran burghers. But we must keep in mind that the early modern stratified society in general was based on privilege and discrimination. Boes rightly remarks that Frankfurt's advocates used the terms 'the Jew' or 'the Gypsy' in a biased way. However, this is equally applicable to 'the Sachsenhäuser' for burghers of Frankfurt's poor people's quarter, not mentioned at all in the book. The fact that one of the Jewish culprits in the case from 1683 profited from a supplication by the Count of Rödelheim and dissenting notes of the advocates speaks for some integration in the judicial system.

The central outcome of the book is that in the time period under study, due to the reception of Roman law and the Reformation, criminal justice became "increasingly unfair" (113): more biased and repressive of women of the lower strata and the minorities mentioned above. Boes presents substantial evidence in favour of her thesis. However, here too there are problems. The adjudicatory practices before the change remain vague and unclear. And here we encounter a striking shortcoming of the entire book. While the author has a good knowledge of the older research tradition, in particular legal history, the results of the new research on crime and criminal justice history are for the most part simply ignored. Thus, for an appraisal of the practice of criminal justice before the middle of the 16th century, Boes refers several times to Ferdinand Rau's work from 1916. [1] However, she makes no mention at all of the works on urban crime and criminal justice in that era by Susanna Burghartz, Gerd Schwerhoff, Peter Schuster and Lars Behrisch. The research on the lower strata of society and marginal groups is dismissed with the following remark: "Sociological terms like 'social stratification' and 'Gemeinschaft versus Gesellschaft' with their multiple interpretations are deliberately omitted, and so are references to the linguistic designation of Randgruppen, Unterschichten or Aussenseiter used by some historians" (22). Regarding gender and the role of women as actors in the criminal justice system of Frankfurt, the works of Rebekka Habermas are missing. [2] Moreover, the new, non-anachronistic perspective in research on the practice of early modern criminal justice, initiated by Martin Dinges, Michel Porret and others is overlooked.

In spite of interesting results in detail, the argument of the book resembles a rather raw woodcut, lacking in nuance. Criminal court records of the early modern period, and in particular of Frankfurt am Main, may tell us more than a story of an increase in repression. A thorough appraisal of the use of justice by different groups of actors, of doing gender and the construction of inequality in court needs more differentiation and more awareness of the debate in recent research. [3]