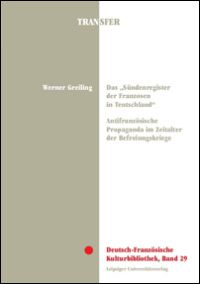 This book is published as part of the Deutsch-Französische Kulturbibliothek, appearing as volume 29. It is divided into two parts: in the first, Werner Greiling provides over a hundred pages of contextual analysis, whilst the second consists of the text of Sündenregister der Franzosen in Teutschland. This work, written by Johann Michael Armbruster, was one of many German anti-French publications produced during the so-called Wars of Liberation against Napoleon. The period between the Battle of Leipzig (October 1813) and the Carlsbad Decrees (September 1819) was one of relative freedom insofar as the German press was concerned. That said Greiling shows how even in this period German states could effectively co-operate in suppressing publications deemed offensive to the ruling princes. They nonetheless failed to suppress Sündenregister, no doubt because its critique of recent princely conduct is fairly restrained. The princes collectively are treated as Napoleon's victims rather than as his agents, as indeed are most other Germans whose categorisation determines the structure of Sündenregister: writers, businessmen, nobles, soldiers, and finally ordinary members of the Volk.

Tellingly, writers are given pride of place in Sündenregister: the section devoted to them comes first, even ahead of the princes, and it is also longer than the others. Within this section, as with the others, the author of Sündenregister recounts numerous French outrages committed in Germany, including the intimidation and imprisonment of authors and publishers deemed to be anti-French. Napoleon, so the charge, sought not only to suppress freedom of expression but even freedom of thought. The other sections dwell on French arrogance towards the German princes, nobles and soldiers, irrespective of whether they were serving Napoleon or not, as well as the devastation caused by Napoleon's Continental System. Ordinary members of the Volk, meanwhile, suffered pillage and violence at the hands of the French army, and nowhere more so than in Prussia and Saxony. Overall, the litany of abuses recounted in Sündenregister makes for depressing reading, and though sources on its reception are absent, one can well guess at its effectiveness in stirring hatred not only of Napoleon, but of the French in general. Noteworthy is the publication's focus on what today would be called the 'human interest' dimension: an exposition of Napoleonic outrages through a long series of accounts of individual cases involving ordinary people and communities. Amongst the impressions left by these accounts is not merely the wanton cruelty of the French, but the pettiness of Napoleon and his marshals who come across not as world historical figures, but rather, as common crooks.

The reproduction of Sündenregister der Franzosen in Teutschland constitutes a substantial fraction of this publication, but the larger part is the contextual survey supplied by Greiling. This is especially informative when it comes to identifying the network of writers, publishers and printers who emerged as opponents of French hegemony. This was a German network: Germany was its point of reference, and it transcended the borders of the individual German states. Greiling considers their effectiveness in mobilising the German people in 1813. His position is somewhere in between the older historiography, which emphasises the importance of anti-Napoleon inspired national sentiment, and more recent work that is sceptical. Greiling stresses that 1813 should be seen within the context of developments in train well before, but that nonetheless the events of that year remain important for the growth of German national identity. Not surprisingly, Greiling devotes much attention to Armbruster's career and work, including his 1797 publication, Sünden-Register der Franzosen während ihres Aufenthalts in Schwaben und Vorder-Oestreich. This work provides an earlier list of French atrocities, committed in the south west during the War of the First Coalition. The Austrian government, we learn, recognised Armbruster's usefulness early on, and subsequently recruited him into its police, illustrating how even at the beginning of this period journalism became an adjunct of state-sponsored 'psychological operations (PSYOPS)'. For a poor writer like Armbruster, teetering on the edge of financial ruin, this proved something of a Godsend. Napoleon's victories of 1805 and 1806, establishing his hegemony in Central Europe, limited the freedom with which journalists and publishers could safely operate, as demonstrated by Johann Philipp Palm's dreadful fate. Greiling goes into some depth in exploring how the French employed their strength to stifle hostile publications throughout German-speaking Europe, and of how quickly after the Battle of Leipzig a network of writers and publishers came together and led a 'liberal-national' public discourse.

This book focuses on German voices hostile to Napoleon, and to France. Publications that emerged at this time and that were more positive or at least nuanced about Napoleon are largely absent here. This is a pity, given that the francophobe version was not uncontested in the German press even at the time. As Wolfgang Piereth demonstrates in Bayerns Pressepolitik und die Neuordnung Deutschlands nach den Befreiungskriegen [1] - a book whose absence from the bibliography is rather surprising - there were several competing interpretations of the recent past on offer to the German reading public, even in 1814. However, where this volume does succeed is in reproducing an interesting anti-Napoleonic tract, providing analysis as to its production and the life of its author, and more broadly, in revealing the network of journalists, publishers and politicians who came together with the objective of liberating Germany.