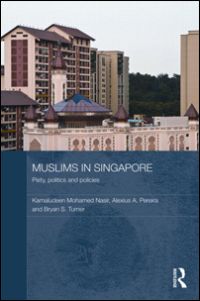 This book provides a comprehensive and up-to-date coverage of Malay-Muslim issues in Singapore and how the government is involved in managing the challenges which have taken place over nearly five decades. The government of Singapore unintendedly created religious enclaves from its intervening policies, from benign actions - allocating resources in education and tolerance and in policy-making pertinent to group rights - to extreme enforcements like containment and seclusion of the group. This issue has been in Singapore for over 30 years and even the term 'Malay problem' has evolved to 'Malay-Muslim problem' because of the increased significance of religion in society.

The idea of this book is to justify how religion and state are inseparable in the 21st century within a modern liberal state dealing with the problems of a multiracial and multi-faith society. The book starts with justification on the unworkable concept of liberalism in association with religious tolerance. The traditional separation of the church and the state is no longer relevant or even practicable in a modern community that consists of diverse religious groups and different social strata. Even if the state attempts to do so, it will unintentionally create (a) 'social vacuum' in society and will eventually end up with entanglements to solve. The authors try to recognize two major paradoxes which are the problem of national identity and the dilemma of managing the separation of the religious sphere from the public.

In dealing with the religion, the government has unconsciously created religious enclaves by categorically dividing the population into four distinct communities: Chinese, Malay, Indian and Other. Aware of the negative consequences of this distinction, the government introduced a national identity of being 'Singaporean'. The other dimension of managing Islam in Singapore is a 'self-assume responsibility' to upgrade the Malay by improving Muslim education, modernizing the law, and pursuing to make adjustments for a better Muslim family life.

In this book, it is also rendered that Muslims in Singapore are pious, especially in the aspect of halal food and wearing hijab (for female). In practicing their religious belief, the government perceives this group as a problem because their social development is not as 'rapid' compared to the other groups of society. The question is: do they distance themselves from society or does the government 'treat' them differently which makes them look different? From their perspective, they have caused no harm as they are obedient to their faith. They are living as 'good people'. Yet, the state does not hold the same idea of their actions. Therefore, at the end of this book, the authors quote William Kymlicka on cultural pluralism in a multicultural society which 'group[s] differentiated rights'. [1] In their conclusion, they refer to Rawl's 'overlapping consensus' (108) framework in conjunction to dilute the 'images' of different ethnicities. The authors use 'overlapping consensus' as to responding the inclination "towards group loyalty, localism, tribalism or ethnic solidarity." In my opinion, this contradicts the idea of pluralism and it does not represent the utmost solution in managing religion among the society if the idea of managing the religion is to insipid the 'images of difference' among society.

Two types of enclavements which are introduced by the authors are the 'spontaneous enclavement' which refers to the cultural aspects of social practicing or more related to the intra-social marriage. The second type of enclavement is the 'institutional enclavement' which points to the protection of communities from certain diseases or short-term measures. This institutional enclavement could be dangerous because it might create a 'social destruction' phenomena like the concentration camps or social physical branding to 'demoralize or destroy a minority community'.

This book successfully addresses a mundane issue of minority (the Malays) in Singapore and how the state 'helps' and 'sees' this group, as a responsibility or an onus in society? It also conscientiously weaves contentious social-religious issues of the Malays, namely the halal food and wearing hijab, as the major problem why the Malays are distancing themselves from society. As a Malay Muslim, I would say that the Singaporean Malays could claim that they are being pious and practicing their belief in order to be a good people (following what they are preaching), yet, it is misunderstood by some that they are not 'socializing' or participating enough in society. Therefore, the government of Singapore has taken some actions that sometimes are lenient and sometimes very insolent.

Nor Azura A. Rahman