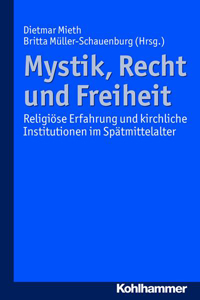 This volume contains a collection of presentations given at conference of 2010 held in Mainz. Ostensibly the occasion was the seven-hundredth anniversary of the burning of Marguerite Porete, but only one of the twelve contributions deals with Marguerite specifically. All are meant to fit under the rubrics of "mysticism," "law," and "freedom". This they do, but in such disparate ways that the volume lacks any genuine coherence. Methodologies range from close examination of judicial documents to theological and philosophical disquisitions. Subject matters range from actions against heresy in Cologne beginning in 1143 to the career of the antipope Benedict XIII in the years around 1400. It is extremely difficult to imagine any reader who will be equally attentive to all the offerings simply because they fall under a set of generic rubrics.

Aside from their disparate nature, the majority of the contributions offer no tangible scholarly advances. An article by Yoshiki Koda, "Köln - Toulouse - Avignon. Die Verurteilumg Meister Eckharts im Kontext der thomistischen Tradition in Südfrankreich", offers much second-hand information about careers of southern-French Dominican theologians, but only speculation about how they may have influenced the outcome of procedures against Eckhart in Avignon.

Irene Leicht, the author of one the best German-language books on Marguerite Porete, here disappoints with a gratuitous comparison of Marguerite and the early Martin Luther. Not only does this lack any valuable new insights into the thought of either, but Leicht's treatment of Marguerite is marred by her disregard of fundamentally important recent research breakthroughs regarding The Mirror of Simple Souls. (The same is true of a paragraph concerning Marguerite in an essay by Dietmar Mieth, although in Mieth's case it yields some truly disconcerting results.)

A long philosophical disquisition by Andrés Quero-Sanchez takes its departure from Meister Eckhart's "understanding of freedom", but ranges over Kant, Fichte, Schelling, and Hegel (a section is headed "Hegels Verteidigung des ontologischen Arguments"), and has no place in a volume that concentrates on historical and theological issues.

Britta Müller-Schauenburg on "Benedikt XIII. als Gegenpapst", does not belong in this volume either because of the chronological incongruity. The author proposes to lessen the awkwardness by referring to works regarding heresy in Benedict's library, but she does this in one page out of seventeen (the other pages warm over the history of the Great Schism and the antipope's career), and even then does not offer close analytical attention to the make-up of manuscripts.

Some readers may be gratified by the presence of Walter Senner's narrative review of Eckhart's trials, but this is a verbatim repetition in German of what Senner has published elsewhere in English. To my mind this is a waste of paper and ink.

Fortunately the volume is rescued by the presence of three excellent studies. Markus Vinzent offers a refreshingly succinct, bold, and persuasive brief for the view that Eckhart made a "Copernican turn" in allowing the possibility of salvation beyond the Church.

What are the responsibilities of editors of conference volumes? Presumably they should extend to more than gathering pages and sending them to the printer. But this hardly seems to have been the case here. For one, the editors did not catch some glaring errors: "Martin of Troppau" as the author of a fourteenth-century chronicle (30); "Gregory XI" as the compiler of decretals (45); Martin Luther's "Heidelberg Disputation" of 1518 (177). Perhaps too they should have reined in Quero-Sanchez from strutting his knowledge of Arabic grammar replete with the employment of Arabic characters (146). And it surely would have been useful if the editors had informed two of their best authors that they were engaged in a direct contradiction: Wehrli-Johns (40, n. 144) vs. Voigt (55) on whether a papal letter was responding to an episcopal inquiry. In all then, three articles in this volume can be heartily recommended, but that does not hold true for the overall quality of the volume.