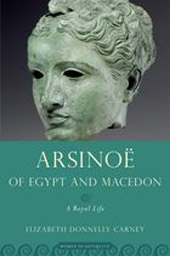 In this book, Elizabeth Donnelly Carney describes and analyses the life of Arsinoë II (c. 316-270 BCE), daughter of Ptolemy I Soter, the founder of the Ptolemaic dynasty. She had been married three times to three different kings, a fact that in itself was perhaps not so spectacular in the fast moving early Hellenistic period. That her second husband, Ptolemy Ceraunus, was her half-brother, and her third, Ptolemy II Philadelphus, was her full brother, certainly was sensational and did change the position and perception of Ptolemaic queens fundamentally.

Writing a book on Arsinoë II, a central female icon of the Ptolemaic dynasty, is a challenge, since Greek, Macedonian, and Egyptian traditions influenced her image. The evidence is extremely multifaceted, comprising written sources in Greek, demotic, and hieroglyphic Egyptian, and iconographic evidence based on Greek and Egyptian traditions. Very often our knowledge derives from authors, writing in Greek and Latin, who lived centuries after Arsinoë and whose attitudes were often biased.

Carney, as an ancient historian, is fully aware of how carefully this heterogeneous information needs to be assessed and that only an interdisciplinary approach can analyse and illuminate this enigmatic queen. She presents a useful, in most aspects carefully researched, book. The vast amount of secondary literature is often highly specialised itself and not necessarily balanced with an interdisciplinary insight. In addition, the attitude to women, specifically queens, is often subjected to a specific Zeitgeist, which influenced the views, ancient or modern, and the research on Ptolemaic queens, as Carney mentions (131-133).

The study is clearly structured and comprises an introduction and six chapters (1-133). A timeline, genealogical tables, and a map of the Eastern Mediterranean (xiii-xvii) complement the book, which concludes with a list of important people, a short appendix comprising the sources and the assessment of Arsinoë's career, notes, a glossary, bibliography, and general index (135-215).

In the introduction (1-10), Carney sets the context, explaining the background of bitter struggles for the early Hellenistic thrones and the roles of royal women, marriage alliances, female patronage, and cult practices. Ancient Egyptian traditions and the concept of maat (world order) are also alluded to, but lack a more detailed discussion. Carney (3) correctly points out that royal wives strengthened positions, secured the continuous role of the dynasty, and repeatedly functioned as 'succession advocates' for their sons, also in Ptolemaic Egypt. It is often complicated to understand the dynastic dynamics and succession, and ancient sources only provide, as the author correctly states, 'modest assistance in this area', since they are often based on speculation and preserve at best only 'court gossip or the propaganda of rivals' (5).

Chapter one (11-30) discusses Arsinoë's background and youth in Egypt, thus setting the context for the further chapters. Carney also alludes to Ptolemy I Soter's and Ptolemy II Philadelphus' approaches to Egyptian kingship, but this remains rather cursory. The author often explains Ptolemaic behaviour with modern analogies, which are not always helpful since they might lead to wrong impressions. For example 'Berenice [I] was, more or less, in Anne Boleyn's position and managed a similar rise to prominence, though she was able to improve rather than lose her status (not to mention her head) as Boleyn did.' (21)

Chapter two (31-48) looks into Arsinoë II as the wife of Lysimachus, ruler of Thrace and one of the former companions of Alexander the Great, who already had adult children when he married her. She came to the court when Arsinoë I, Lysimachus' daughter by another wife, must still have been in residence at her father's court before she married Ptolemy II. Arsinoë II might have brought her up, making subsequent events - Ptolemy II exiled Arsinoë I before marrying Arsinoë II - ironic. Again, Carney involves modern analogies: 'Succession politics in Alexandria tended to ricochet to Lysimacha and back again. We should forget those modern stereotypes of silver-haired CEOs and instead think of the marriages as more like a merger of Verizon and AT&T.' (32)

Chapter three (49-64) examines Arsinoë's marriage to her half-brother Ptolemy Ceraunus. Carney discusses the question of incest and its assessment by ancient authors and makes it clear that it was not a coincidence that the same woman married a half-brother and then a full brother.

Chapter four (65-82) deals with Arsinoë's return to Egypt and marriage to Ptolemy II Philadelphus, her full brother, who - according to Carney - was also the 'first Ptolemy to engage in massive temple building, a critical element in Egyptian kingship' (67). Ptolemy I, following Alexander's example, had recognised temple building as a critical element in Egyptian kingship, though his son engaged even further with it and much more of his building programme survives. Places, where temples were built and extended in the early Ptolemaic Period, were frequently connected to those, where the rulers of the Thirtieth Dynasty (the last native dynasty, 380-342 BCE), especially Nectanebo I and II, had created huge precincts. [1] Most of the chapter is dedicated to the marriage of the full siblings, bringing together and assessing what has been published on this topic before, emphasising that neither Egyptians nor Greeks and Macedonians were terribly disturbed by this marriage.

Chapter five (83-105) discusses Arsinoë II as wife of Ptolemy II. Though Carney raises important points, she might have benefitted from consulting some further publications, for example Grimm's [2] and Pfrommer's [3] contributions to Alexandria or Ptolemaic queens in general, which also illuminate Arsinoë's accomplishments as queen, as well as Schäfer's new edition and analysis of the Mendes and Pithom Stelae, which are vital for assessing the queen [4]. The recent edition of some papyri kept in the Sorbonne [5] includes documents that shed new light on Arsinoë's death: the date, which Carney still considers as unsolved, is now confirmed as 270 BCE. [6]

Arsinoë II became critical to the projection of the image of the Ptolemaic dynasty during her lifetime, but her importance increased after her death. Chapter six (106-133) is therefore dedicated to Arsinoë's afterlife. Her cult survived at least until the first century BCE. She formed the 'base from which the position of royal women in dynasty evolved' (128), even if the reputation and image of the last Ptolemaic queen, Cleopatra VII, almost absorbed the memory of all other Ptolemies. Carney correctly suggests a monograph dedicated to Arsinoë's images, but she might not have seen Albersmeier's study (not in Carney's bibliography), which discusses female statues in Ptolemaic Egypt and puts Arsinoë's in context. [7]

To conclude, Elizabeth Donnelly Carney has produced an important overview directed at a general audience interested in the ancient world, as is befitting for the series 'Women in Antiquity'. The book summarises the facts known about Arsinoë II and puts them into a larger context of the Hellenistic word. It is therefore a useful introduction and a good point of departure for those interested in a more detailed approach to a dazzling queen. Due to the author's background, stronger details are offered on the more Classical side, which makes it apparent how important further studies on Arsinoë II and the other Ptolemaic queens are, especially from the Egyptological, but mainly from an interdisciplinary perspective. Parts of the appendix, which discusses the sources and assesses Arsinoë's career, should have been added to the chapters, since it is central for the understanding of the period.