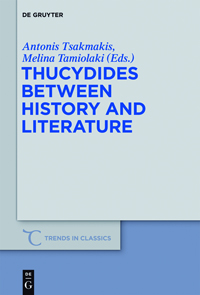 This collection of twenty-three papers arises from a conference at Alimos / Athens in April 2010, on the theme of "Thucydides' Techniques: Between Historical Research and Literary Representation". The title of the conference gives a good sense for the emphases of the papers in this ensuing collection, though it would be fair to say that "literary representation" bulks much larger than "historical research" in most of the contributions. Tsakmakis and Tamiolaki summarise this volume's favoured lines of enquiry thus in their introduction: "How does a war become a text? More specifically, how did Thucydides proceed in order to investigate the course of events and shape them as an elaborate narrative? How did he convince future generations that he was a 'historian', if not 'the' historian? Are there specific techniques, strategies, practices that can explain how Thucydides' 'written composition of the war' both renovated a pre-existing literary tradition and influenced subsequent developments, despite evident discontinuities and dissonances?" (x)

In fact, what follows this statement of intent mostly has more to do with the shaping of Thucydides' elaborate narrative than with his procedures of investigation, though there are a few exceptions: Panos Christodoulou, for example, reads Thucydides' depiction of Pericles against the background of contemporary comedy (225-254). As long as this caveat is kept in mind, one cannot but be struck by the variety of approaches and different levels of analysis that this collection comprehends. Studies of Thucydidean tricks of style (such as Pierre Pontier on litotes, 353-70) and the language of the historian's speeches (Daniel P. Tompkins on Pericles, 447-64) can be found side-by-side with analyses of his construction of scenes (such as Anna A. Lamari on cross-references, 287-307).

There is not a great deal in this collection that will fundamentally change how anyone reads Thucydides. Some of the articles revisit, with fresh material, themes which the scholar in question has explored before: as Paul Demont puts it at the beginning of his study of the Athenian Plague, "In this article, I briefly return to these conclusions, before trying to address more controversial issues again" (73). Some innovations are less than helpful. Hans-Peter Stahl's use of what he calls "the sequence of narrative climax, epilogue, and closure" (310) in Thucydides would profit from clearer definition of its terminology: a passage which is described as a "narrative climax" (316) then becomes, without explanation as to whether the shift is significant, a "literary climax" in the next paragraph (317); a "literary climax" (without italicization of the adjective this time) on one page (320) is then called a "narrative climax" on the next (321); "closure" is sometimes just "closure" (315, 316) and sometimes "factual closure" (320, 321); and the notion of a "sub-climax" is introduced in a footnote on the last page but three of the article for the occasion of its sole deployment in the whole piece (325 n25).

Nonetheless, there is something in almost every article here to detain the reader. There are some intriguing close readings of individual episodes in this collection, particularly Jonas Grethlein on 2.83-92 (94-102) and Tim Rood on the Cylon Conspiracy (119-38). This volume is at its best when working thus intently on particular stretches of the text, and the results of this attention are in many cases very rewarding.

As noted above, Tsakmakis and Tamiolaki consider Thucydides' relationship to a "pre-existing literary tradition" and "subsequent developments" to be a theme of this volume. It is a shame, therefore, that some contributions are a little surer-footed in negotiating Thucydides than they are in dealing with other authors. When Vassiliki Pothou claims in her article "Transformation of Landscapes in Thucydides" that "it is a general feature of Herodotus' narrative that oriental people and not the Greeks performed massive interventions in nature" (167), she does not note the complication that, according to one account, it is the Greek Thales that diverts the river for Croesus (Herodotus 1.75.4). Anna A. Lamari's reference to the "narratorial framing of the letter" in Ovid's Heroides (294 n29) is odd, since the Heroides lack "narratorial framing" in the sense she gives it. Roberto Nicolai seems to see Caesar Bellum Gallicum 1.1 as an inheritor of a Thucydidean model for a geographical opening section ("The Herodotean catalogue is completely synchronic; the Thucydidean one is diachronic and advances in a sequence of migrations of peoples and foundations of towns", 151 with n19); in fact, Caesar Bellum Gallicum 1.1 is couched almost entirely in the present tense, and has virtually no diachronic element at all. And while Jonas Grethlein scores some very good points about the contrasts between Thucydidean and Plutarchan narrative strategy, he makes life easier for his argument that Plutarch "does not generate narrative suspense" (116) by choosing the short anecdote of the taming of Bucephalus from the Alexander as his comparandum (114-6) to Thucydides' account; would something like, say, Plutarch's account of Antony's Parthian War (Plutarch Antony 37-52) be an equally striking contrast from Thucydides? On the other hand, Nikos Miltsios on "The Narrative Legacy of Thucydides: Polybius, Book I" (329-49) is an interesting contribution to a burgeoning field.

In summary, then, this volume can sometimes be patchy, and does not quite achieve everything it sets out to do. In this respect, though, it is little different from most collections of conference proceedings. There is much in it that anyone with an interest in Thucydides will find stimulating.