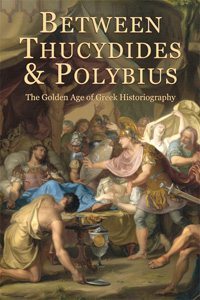 This volume arises from conferences at the Universities of Harvard and Bologna in 2007. Its sub-title is a little misleading, though not perniciously so. Historiography is certainly central to most of its contributions. One notes Riccardo Vattuone on Theopompus, Cinzia Bearzot on the Hellenica of Xenophon, and Giovanni Parmeggiani, Nino Luraghi, and John Tully on Ephorus.

On the other hand, the scope of this collection is wider than the narrative histories of the period between Thucydides and Polybius. John Marincola's treatment of Isocrates notes that its subject "... never wrote history, and [...] states clearly that although histories are justly praised he did not use his talents in that direction" (41). Roberto Nicolai's chapter, significantly titled "At the Boundary of Historiography: Xenophon and his Corpus", sets out to read Xenophon's works beside each other, the Agesilaus, the Cyropaedia, and the Memorabilia no less than the Hellenica. Sarah Ferrario focusses upon the epigraphy of Leuctra at Thebes (270) and Aigospotamoi at Delphi (275) as much as upon the colonial ambitions of the Anabasis (282). When Giovanni Parmeggiani's Introduction speaks in terms "of fourth-century historiography and of fourth-century literature that dealt more generally with the past" (6, my italics), his formulation more accurately characterizes the emphases of the collected work.

In this rich and various volume, two recurrent themes stand out. The first is a bracing scepticism towards tralatitious interpretations of fourth century literature, especially where those interpretations were formed upon inadequate data or without due regard to the distorting lenses of the testimonia. The insight that quoting authorities may have their own agenda in quotation was not, pace Parmeggiani (2), originated in 1997. [1] "Cover-text", as a term, has had little traction in Anglophone scholarship, and its sister-metaphor "diaphragm" has found no place in French letters. But the insight has certainly impressed itself upon more people since the millennium and the present volume puts it to very good use. Its contributions question a slew of lazy assumptions about the fragmentary historians between Thucydides and Polybius - and, for the most part, rightly so.

Ephorus is the principal beneficiary of this scepticism about the scholarly consensus. Nino Luraghi demonstrates that one should not be too confident in assuming that we know exactly what reality lay behind Diodorus' claim that Ephorus began his work with the Return of the Heraclidae (133-7). John Tully shows that previous scholars (including, mea culpa, the present reviewer) accepted rather uncritically the idea that Ephorus was the first to write "Universal History" - and, indeed, questions the robustness of "Universal History" as a concept (162-5). The same spirit informs other contributions and other authors. Christopher Tuplin, in a meticulous survey, puts paid to the idea that the Persian Empire was widely perceived as decadent and vulnerable in the decades before its fall; John Marincola demolishes some hitherto prevailing interpretations of Isocrates on history; and Rosalind Thomas makes an excellent case for the dynamism and multifariousness of "polis history" (242) against the rather reductive account of Jacoby. One might well say that the most positive contribution of this volume - and it is a considerable one - lies in its stringent negativity.

This is not, however, the whole story. The other recurrent theme of the volume, as implied by the slight disjunction between title and contents, is the need to consider the historiography of the fourth century in the larger context of different sorts of literature (and epigraphy and material culture) that dealt with the past in this period. As well as Roberto Nicolai's synoptic look at Xenophon and John Marincola on Isocrates, whom we have already noted, Lucio Bertelli looks at Aristotle and his epistemological machinery for understanding the past. Jonas Grethlein's The Greeks and Their Past: Poetry, Oratory and History in the Fifth Century BCE (Cambridge, 2010) claimed that "The rise of Greek historiography as well as, compared to other times, the richer textual transmission has made the fifth century BCE the most attractive choice" of period for looking at ancient Greek ways of processing the past (4). This volume shows that an equally good case, and perhaps a stronger one, could be made for the fourth century instead.

The collection is not altogether without its flaws. Critical as it is of some scholarly orthodoxies, it occasionally swallows some others without, perhaps, sufficient justification or acknowledgment. Xenophon, for some reason, is the main casualty of this. It is not, pace Nicolai and Plutarch, straightforwardly clear that "Themistogenes of Syracuse" was a pseudonym for Xenophon (67 - contrast BNJ 108) and the lack of apologetic intent in the Anabasis should ideally be argued rather than asserted (67 n23); such an intent would not, in any event, necessarily invalidate Nicolai's other points about Xenophon and genre. Despite the volume's general insistence on the individual agenda of quoting authorities, there are times when the awareness of such agenda wavers. Diodorus may indeed have said that Epaminondas was "by his [very] character a planner of great things and grasping for eternal glory" (272, Diodorus 15.66.1), but we should be aware that the number of people whom Diodorus presents as having a conscious eye on their own eternal glory, from Osiris at 1.17.2, Ninus at 2.3.1, and Semiramis at 2.7.2 onwards, is rather large. We may therefore suspect that in the portrayal of Epaminondas we find a characteristic preoccupation of the historian rather than an authentic insight into the thinking of the historical agent.

These, however, are isolated issues. This is a thought-provoking and consistently interesting collection. It deserves consideration by anyone interested in the treatment of the past in the literature of the Greek world between Thucydides and Polybius.