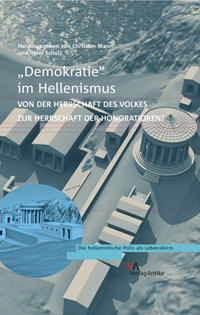 How powerless was the Hellenistic polis (350-150 BCE)? The question was answered powerfully by Louis Robert and Philippe Gauthier: the polis did not die, did not lose its agency. But what about its internal life? Recent work (especially by V. Grieb) has brought to light the vitality of politics in the post-Classical polis, and even its democratic character. [1] This development has much to contribute to the debates about ancient politics and democracy but the scare-quotes in the title, the question mark in the subtitle of the volume edited by C. Mann and P. Scholz indicate the difficulty of the theme, but also their care in exploring the history of the post-Classical polis. [2]

C. Mann's introductory essay presents trenchantly current thinking and debates, and extends to raising questions about equality and inequality in the Hellenistic polis, and their significance. This paper aims to join up the debates on the Hellenistic city-state with the debates and concepts developed for the study of Athenian democracy. In this respect, the Athenian success in taming elites, through ideology and institutions, perhaps needs more emphasizing, for comparative purposes. The shifts in Athenian practice and culture in the late fourth century also need thought. In addition, I take more seriously than Mann the evidence for non-Athenian democracy, notably at Argos, as the background for the general convergence of polis institutions in the Hellenistic period toward a democratic norm (in itself, a major historical phenomenon in need of explanation). [3]

P. Scholz examines literary evidence for Hellenistic "democracy" - Polybios, the main philosophical schools, and Cicero's portrayal of assemblies of contemporary Greek cities as mob rule (Pro Flacco 15-19). All the texts are reproduced as an appendix. One problem is the disparate nature of the literary sources; Scholz ends abruptly, without pulling all the threads together about this type of evidence (especially in contrast with the epigraphical material). The philosophical material (Scholz's specialty) could do with expansion beyond the main schools, to look at popular or "common" philosophy, in view of L. Robert's sense that the political language of the Hellenistic period grew out of fourth-century debates. Finally, Pro Flacco receives rather cursory treatment, in spite of Scholz's historical notes: the reliability of the satirical account in this forensic speech, the influence of Rome (many of the assemblies where summoned by Laelius, the prosecutor in the case), and the exact details need more attention (the cities and assemblies are attracted by Laelius' offer to pay travel expenses, and not by jury pay, as Scholz seems to think; the Kymaian Athenagoras is not punished by the city, but by the governor, which means that proceedings do not involve the assembly reversing its decree).

P. Hamon provides an essay on equality in the Hellenistic city, especially in the light of euergetism and elite affirmation in the late Hellenistic period, as a complement to the evidence for democratic institutions and practice (as he writes, optimistically, we now know what Hellenistic democracy looks like). He gathers widespread evidence for egalitarian ideology in documents from Asia Minor: office-holders were commended for taking a proactive attitude towards equality. An important shift occurs in the late Hellenistic period, with the emergence of a universal humanitarian benefaction, which includes slaves and foreigners in an ethically coloured attitude, but marks the depoliticizing of equality (a forthcoming paper by B. Gray examines this shift in relation to philosophical debates). One fascinating case is the gymnasiarch Metrodoros, who in post-133 Pergamon gave the full honours of ephebic procession at funerals not just to benefactors, but to every citizen - universalizing an elite honour on egalitarian terms, but within the civic context - during the supposedly elitist late Hellenistic period.

A. Walser looks at the judicial institutions of the Hellenistic polis - a major part of the existence of the citizen. Against de Ste-Croix's notion that popular courts quickly died out, Walser gathers the evidence for large popular juries, drawn by lot and drawing pay (from court fees). He qualifies the importance of two phenomena often adduced to paint a picture of judicial dysfunction, the backlog in Boiotia (Polybios), and the widespread resort to "foreign judges", small judicial panels summoned from outside. Yet Walser is willing to see serious shifts in the understanding of the position of the dikast - a third century decree from Erythrai honours a man for his service in the courts, as if this was a special deed rather than a normal civic duty. It might have been worth extending the story to include late Hellenistic evidence for the courts in Athens: a first-century decree mentions to demokratikon kai to ison in relation with courts (IG II2 1062 with SEG 49.129, S. Follet).

The final paper is a substantial investigation by R. Fabiani of the decision-making processes in Hellenistic Iasos. Fabiani provides a careful summary of the constitution of the Iasians, as seen in the epigraphical material, mainly from the mid-fourth to the second centuries BCE: the treatment takes into account the steady increase in Iasian epigraphical material. Institutionally, Fabiani sees democratic traits (large assemblies, pay, frequency of meetings, wide powers of assembly). Procedurally, Fabiani detects a period (300-240 BCE) with diverse proposers, including obscure men, followed by a period (240 BCE-100 BCE) when the board of prytaneis monopolized the right to propose decrees, either directly or upon application by individuals. The prytaneis can be shown prosopographically to have belonged to elite families. Fabiani's picture is that of a democratic moment followed by elite capture in the second half of the third century BCE, perhaps because of emergencies or social crisis. Fabiani sees the frequent resort to foreign judges as part of elite takeover. The thesis is original, and may be corroborated by contemporary phenomena (the boom in private statue dedications on Rhodes or Delos, or the change in the ethos of the dikast as detectable at Erythrai). At the same time, are institutional features and prosopography enough to show full elite capture, without attention to ideology and politics?

The final picture is one of diversity - with Hamon's egalitarian magistrate in the late Hellenistic, and Fabiani's oligarchizing prytaneis both in the 230s. The general shift around 200 BCE seems clear. What remains obscure is why and how this occurred. It is a shame that the volume does not finish with a final essay on this (and it also is a shame that there is no full index locorum or consolidated bibliography). Read with recent work, and with an eye on the old Rhodes-Lewis volume, this is a thought-provoking, if specialized, volume - which might reward classicists and historians as well as scholars of the Hellenistic and post-classical.