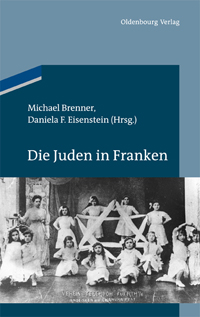 This book is a collection of sixteen articles ranging over nearly a thousand years of the history of Jewish life in Franconia, one of the regions of Germany where Jews were never entirely expelled.

Aubrey Pomerance's article, "Die Memorbücher der jüdischen Gemeinden in Franken," shows how Jews preserved their history. Jewish communities had a tradition of keeping a "Memorbuch," which was a combination of martyrology and community prayer book. Some Memorbücher also contained a register of deaths in the congregation or a necrology. The Memorbuch for Nuremberg contained a list of 450 names of victims killed in a pogrom in Rothenburg in 1298. Another Memorbuch listed the 37 Jewish victims murdered in 1147 in Würzburg at the time of the Second Crusade. Almost 70 of the 200 Jewish communities in Franconia are known to have kept Memorbücher and some of them were used for over 300 years. In the 1920's and 1930's, Rabbi Magnus Weinberg researched these community prayer books. He published a two volume work in 1937 and 1938, describing 48 different manuscripts. The majority of the Memorbücher are now lost and many were destroyed in November 1938. A few years after publishing his volumes, Rabbi Weinberg and his wife were deported to Theresienstadt, where they were both murdered. In 1998, the Memorbuch of the congregation of the Klaus synagogue in Fürth appeared in an antiquary shop in that city. The Jewish Museum of Franconia bought and restored the manuscript, but the museum was never able to determine how the book came to be in the antiquary shop.

Another article, Daniela Eisenstein's "'Über die vielen Juden klagt man bitter...' Jüdisches Leben in Fürth vom. 16. bis ins 19. Jahrhundert," describes the development of Jewish life in Fürth and its influence throughout Germany, over four centuries. In 1499, Jews were expelled from Nuremberg. In 1528, the Margrave of Brandenburg-Ansbach allowed a permanent settlement in Fürth, although the Jews there were taxed at a higher level than elsewhere. The favorable legal situation and the well-to-do members of the Jewish community led to the development of a variety of Jewish institutions, including a cemetery, several synagogues, a Talmudic school, a hospital, an orphanage, and a Hebrew printing press. In 1670, many Jews, who had been expelled from Vienna, settled in Fürth. Although the relations between Christians and Jews in Fürth were not always peaceful, the Jews were never expelled from the 16th to the 19th centuries. However, today little remains of the buildings from this era, because they were largely destroyed during Kristallnacht in 1938.

Another significant article is Cornelia Wilhelm's "Die Emigration der fränkischen Juden im 19. Jahrhundert nach Amerika." Between 1803 and 1806, much of Franconia became part of Bavaria. In 1813, the kingdom of Bavaria issued a Jewish Emancipation edict. This law ended the autonomous administration of the Jewish communities under the leadership of their rabbis and it put restrictions on the number of Jewish households in a given community. This forced many young Jews, who hoped to marry and start a family to emigrate, as the entire population grew. Further, the Bavarian state mandated that rabbis must be university educated (rather than at traditional Talmudic schools) and that religious services be held in German. These factors contributed to the development of Reformed Judaism, which attempted to concentrate on "the Essence of Judaism" as a religion of "pure morality" and as a "religion of humanity." (171-172) "Between 1840 and 1875 about 140,000 German-speaking Jews immigrated to the United States." (169) Many of these Jews came from Bavaria, especially from the many Jewish communities in Franconia. It was not rare for Jewish communities in Franconia to lose more than 30% of their population between 1840 and 1860 to this migration to America. The Bavarian government demanded a tax of 10% of the value of an emigrant's property for legal permission to leave. After some members of a family left for America, other relatives would follow in a "chain migration," that is some cases resulted in the depopulation of entire Jewish communities.

The new Jewish immigrants were not disappointed in America as the "Land of Freedom". Because of the separation of church and state and the guarantee of religious freedom, Jews were able to become naturalized citizens and enjoy the same rights as other Americans. One of these immigrants was Levi Strauss, founder of the Jeans company, who was originally from Buttenheim near Bamberg. Many of the German Jews settled in the cities of Cleveland, Chicago, Cincinnati, and St. Louis.

In 1820 there were only around 3000 Jews in America. The German Jews did not feel comfortable with the Orthodox Sephardic Jews or the existing congregations of English-speaking Jews. Several rabbis who had immigrated from Fürth played a leading role in the founding of the Union of American Hebrew Congregations, Reformed Judaism, and the Hebrew Union College in Cincinnati.(179-180) The German Jews became a sort of "founding elite" (169) for the later massive wave of 2.5 million eastern European Jews, who arrived in America between 1880 and 1920.

Alexander Schmidt's article,"'Eine ganz modern Gemeinde...' . Zur Geschichte der Nürnberger Juden vor 1933" describes Jewish life in Nuremberg before the Third Reich. Only in 1850 did the magistrates of Nuremberg again permit Jews to settle in their city. In 1875 the congregation was able to build an impressive synagogue on Hans-Sachs-Platz. In 1902, the orthodox Jewish congregation built their own synagogue. The Jewish community grew along with the population and between 1922 and 1930, the city had around 10,000 Jewish residents. Many Jewish residents were actively engaged in the cultural life of the city. All of this was almost entirely swept away during the Third Reich. A commemorative book, created by the city archives, lists the names of 1337 Jewish women and 1036 Jewish men from Nuremberg who were victims of the Holocaust. (197)

Edith Raim's article, "Die Verfolgung und Vernichtung der fränkischen Juden in der NS-Zeit" describes the brutal atrocities committed against Jewish citizens by the Storm Troopers, Hitler Youth, and ordinary people, who volunteered to participate.(210) Often these beatings left victims with concussions or blind in one eye. These actions took place in large and small cities, often with neighbors involved. The violence culminated in Kristallnacht. In the region around Nuremberg and Fürth, "17 synagogues were burned, 25 more were demolished, 115 Jewish businesses destroyed, 39 businesses were closed, and 594 dwellings devastated."(208) Shortly before the start of World War II, of the 35,000 Jews who had lived in Bavaria, only 15,000 remained. Fully 3/5 of the Jews had already fled or had died.(213) In 1943, most of the remaining Jews from Franconia were transported to Auschwitz and other concentration camps. Hardly any survived the war.

The last article, Michael Brenner's "Die Wiederaufbau der jüdischen Gemeinden Frankens," describes the poignant stories of survivors attempting to re-establish their Jewish communities in Franconia. For example, Arno Hamburger described his return to Nuremberg after fleeing to Palestine and fighting in the Jewish Brigade of the British army in Italy. At the end of the war, he drove a Jeep over the Alps to Nuremberg. His home city was almost unrecognizable. He finally went to the Jewish cemetery to search for his parents, who were a privileged mixed marriage (Jewish/Gentile) and therefore not deported. He finally found his parents living in the cemetary's mortuary. At first, even his own father did not immediately recognize the British soldier as his son.

Many Jews naturally had a difficult time staying in Germany after the Holocaust and they left for Israel or the United States. By the 1980's the remaining congregations faced declining members and aging population. But the former states of the Soviet Union opened their borders and some 150,000 former Soviet Jews have settled in Germany. As of 2007, seven Jewish congregations, including a newly founded congregation in Erlangen, exist in Franconia and they often have multiples of the numbers of members that they had in 1990.(281)

One weakness of the book is that the sixteen articles do not provide equal coverage to all eras, but that is probably unavoidable. This collection of essays is a worthy addition not only to the history of the Jews in Germany, but also to the history of Franconia. The familiar landscape of Franconia with its Protestant and Catholic regions should be supplemented with a network of Jewish communities.