Vladas Sirutavičius / Darius Staliunas / Jurgita Šiaučiunaitė-Verbickienė (eds.): The History of Jews in Lithuania. From the Middle Ages until the 1990s, Paderborn: Ferdinand Schöningh 2020 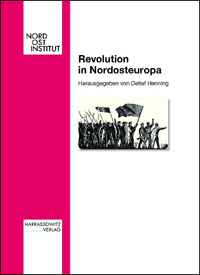 The first two decades of the twentieth century can be fairly characterized as a revolutionary period. In particular in East-Central and Eastern Europe, from Moscow to Berlin, the status quo of 1900 was almost entirely shattered twenty years later. The problematic nature of "revolution" in German history - did Friedrich Ebert "betray" it or attempt to institutionalize its ideology? - is only too well known, but the concept and outcomes of revolution in East-Central Europe are much more thinly researched. The present volume attempts to fill in some of these historiographical lacunae. About half of the essays here focus on the 1905-1918 period, while others look into the concept of revolution in the nineteenth and later twentieth century. These papers were originally presented at a conference on "Nordosteuropa im Wirkungsbereich Deutschlands und Russlands"; the broad focus of that conference is reflected in the published papers.

The volume begins with an introductory essay by the editor which considers the diverse definitions of "revolution" and applies these concepts to the Baltic region. This essay is followed by a discussion by Barbara Vogel of "revolution" (or the lack thereof) in the German concept. Hans-Jürgen Bömelburg provides a sweeping overview of "Der Revolutions- und Aufstandsdiskurs in Polen (1789-1870)", emphasizing the importance for Polish historical memory of "insurrection" as a revolutionary form.

Five essays examine the period 1905-1918, with a geographical focus on Russia, Poland, Lithuania, Finland, and the Jewish Pale of Settlement. For this reader the most stimulating among these are Dietlind Hüchtker's analysis of "The Politics and Poetics of Transgression" in the Kingdom of Poland during 1905 and Tomas Balkelis's look at the Lithuanian intelligentsia during the 1905 evolution. In both cases the authors take a fairly well-known event and provide interesting new interpretations, in Hüchtker's article concerning the language of protest and riot in Polish cities, and in Balkelis's piece on the complicated relations between Lithuanian national intelligentsia and "the people". Hüchtker details the process by which agricultural and industrial strikes combined with a boycott of Russian institutions (the school strike) created a new form of mass politics. Balkelis emphasizes the importance of social components for the Lithuanian masses, both challenging and supplementing the national-cultural conceptions and demands put forth by Lithuanian national intellectuals such as Jonas Basanavičius.

The final three essays consider revolution in the context of the establishment and collapse of Soviet power. David Feest analyzes the events of the summer of 1940 in Estonia and - more importantly - how these events were later incorporated into a Soviet narrative of Estonian revolution or, alternatively, left out of this party-approved history. In the end, of course, the events of 1940 in Estonia, even with the most active "editing", could not provide a convincing - much less inspiring - revolutionary narrative.

One rarely considers perestroika a form of revolution, but Rudolf Mark argues that the events of 1985 to 1991 in the USSR can indeed be viewed as a variant on this theme. Certainly Michail Gorbachev both emphasized his loyalty to the revolution (of October 1917) and insisted on the revolutionary character of his policies of glasnost and perestroika. In the end, however, the revolution - if it may be so designated - was an unintended one that swept away Gorbachev, the Soviet nomenklatura, and communism to the ashbin of history. Mark ends with an interesting discussion of recent Russian debates and analyses of the Gorbachev's policies and legacy.

The volume ends with Daina Stukuls Eglitis's theoretizing of events in Latvia in the 1980s and 1990s as a variant of revolution. For Latvia, she posits, Soviet power had never been accepted as "normal"; thus revolution in this case meant a return to normalcy. Along these lines, Eglitis notes both ruptures with the immediate past (and attempts to recreate interwar Latvian conditions) and a more evolutionary approach, transforming institutions rather than radically eliminating them, in particular in social and economic spheres.

The essays collected in this volume provide a variety of new analyses of the concept of revolution in the context of Poland, the Baltic region, and Russia. This volume will be of particular interest for graduate students and specialists wishing to bridge the gap between theoretical models and historical facts.