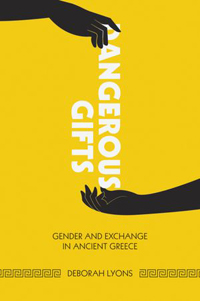 Since Finley's World of Odysseus in the 1950s there has been a persistent interest in gift-giving and reciprocal exchange as a norm of social and political relationships in Greek society from Homeric epic into the Hellenistic period. In the same way, gender studies and scholarly research on the family and the oikos have gathered pace since the 1960s and 70s. In this new monograph, Deborah Lyons brings together these two largely separate research trajectories to discuss not only women as the givers of gifts, but also women objectified as the gifts themselves, and the implications for their status in their position both as objects and agents in the Greek polis.

In Lyons' view, women's roles in the reciprocal exchanges of the polis were at best ambivalent, but were generally regarded as ideologically disruptive and even dangerous. Informed by the anthropological modelling of Sahlins' reciprocal exchanges (and establishing particular parallels between ancient Greece and twentieth-century Melanesia), Lyons draws on examples from epic and Greek tragedy to show how, in the first instance, there was a differentiation between female gifts (textiles, which were also produced as the result of women's labours) and male gifts (metal objects, which were produced outside the oikos), and how women themselves could also become gifts, especially in the context of marriage. She argues, women were at the centre of deeply-felt anxieties in Greek society about exchange, both in regard to the gifts they gave, and in their own status as gifts.

In myth, women could be seduced by gifts to betray their husbands (Lyons gives the example of Eriphyle), but also give destructive gifts, even unwittingly, such as Deaenara's poisoned robe which she sends to Heracles, or the poisoned robe Medea sends to Jason's new bride. At the heart of Lyons' book is the gift of Pandora, who is given to mortals as a baneful gift. According to Lyons Pandora represents everything that Greek men fear most, even though they know that they cannot do without women because of their role in protecting the household and bearing and rearing the children. 'This deadliest gift of the gods is one that cannot be refused' (44).

Another significant thematic strand in the monograph is the desire for the self-sufficiency of the oikos, which is threatened by the necessary interaction with the outside world represented by marriage, a ritualised relationship that brings a stranger into the confined world of the oikos. The brother/sister relationship, on the other hand, is a very strong bond. While wives are at best ambivalent, there is a fantasy of sibling intimacy. As Lyons is careful to point out, these motifs and stories reflect the ideological concerns about men for 'gifting' women, not any social realia. In this way, she has managed to 'get under the skin' of ancient social history in a way which is both creative and original.

This is a small but fascinating volume, which puts together a very clear argument and maintains it with great cogency as the strands are drawn together. One of the great strengths of the monograph is the way in which it weaves the arguments together in an exquisite tapestry, picking up themes and letting them drop, only to return to them in another context to create a different picture with fresh subtleties and nuances. However, it is also a very pessimistic book, in that it understands the male perception of women in Greek society in very negative terms. On Lyons' interpretation (which she explicitly recognises), there are few women in Homeric epic or Greek tragedy who give good gifts or become themselves good gifts as wives - even questions hang over Penelope about whether she will turn out to be the good and faithful wife.

Yet, some of her assumptions might need more subtlety themselves. For the most part, Lyons is working from the basis that women could not own wealth and so had to use 'women's gifts' to enact exchanges in a way that was not only non-male but also dangerous to men. However, while this might have been true at Athens, it was not necessarily the case at Sparta, as Lyons herself notes in passing. The picture that Lyons so carefully delineates may have been very different in a Spartan context, if only we had the evidence. And while Hesiod may have presented one very negative view of women, other archaic poets, such as Alcman in his partheneion, could have brought different perspectives. In fact, Alcman and Sappho can provide more positive images of marriage - especially of note in this context is the Sapphic description of Andromache's bridal procession with her bridal gifts. Herodotus' story of the marriage party of Cleisthenes' of Sicyon, with all its epic resonances, also suggests that the world of the oikos may not have been as closed and inward-looking as Lyons suggests.

Nevertheless, this book is immensely readable and beautifully constructed - I felt no temptation to put it down, but read it at one sitting. Bringing together as it does anthropological theory, feminist perspectives and classical texts, this book will represent an important contribution not only to gender studies, but also to our understanding of the gift in the ancient world.