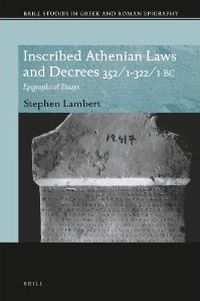 As the subtitle "Epigraphical Essays" suggests, this volume by Stephen Lambert, one of the leading active English-language scholars on Attic epigraphy, is a collection of essays rather than a comprehensive analysis of Athenian laws and decrees in the last thirty years of Classical Athenian democracy.

Whereas volumes which republish a wide range of articles and chapters by the same author can sometimes appear disconnected, this volume brings together eighteen clearly linked essays that were published in the journal Zeitschrift für Papyrologie und Epigraphik and various edited volumes whilst Lambert was preparing his forthcoming fascicule of Inscriptiones Graecae II3 1. Despite its strong epigraphical focus this volume should therefore prove useful not only to specialist epigraphists, but also students and scholars of the Athens of Demosthenes.

The original publications provided Lambert with a medium to describe and explain new readings, joins, interpretations, and any innovations that were not appropriate for inclusion in IG, and were according to Lambert designed to "facilitate historical research" (4). Individually they achieved that aim as Lambert's appendix of addenda and corrigenda attests, but now assembled in one place they can shed even more light on a time period that is better known for the extant speeches of Demosthenes and Aeschines.

Part A, which Lambert designates as the "Main Series", comprises five chapters focusing on various categories of inscribed Athenian state laws and decrees from 352/1 to 322/1 which were conceived as a set. Collectively these chapters discuss in considerable detail some 215 Athenian inscriptional texts. They are divided into: Decrees Honouring Athenians; Athenian State Laws and Decrees; Decrees Honouring Foreigners (in two parts); and finally Treaties and Other Texts. This section is pivotal reading for any epigraphist whose research focuses on the final decades of Classical Athenian democracy, but is probably of relatively limited relevance to non-epigraphists.

Part B - by far the longest section - is where epigraphists and non-epigraphists alike will find rich pickings. Despite the deceptively uninspiring subtitle "Other Prolegomena" there are some real gems amongst these twelve chapters. Arguably the most significant of these is Chapter VIII "The Only Extant Decree of Demosthenes", based on the republication of IG II2 231 (which we now know will soon become IG II3 312 courtesy of the first published concordance of IG II2 to the forthcoming IG II3). This chapter allows the great orator Demosthenes to break "his epigraphic silence" (271) as Lambert puts it. Not only will modern commentators who have been troubled by Demosthenes' almost complete absence from the Athenian epigraphic record gain much from the accessibility of his words, they will also benefit from Lambert's conclusion that "one reason why Demosthenes is poorly represented among proposers of surviving decrees of 355-322 is probably that, for the second half of that period, he was, in fact, not an active decree-proposer" (270). While I am sure that Lambert's judgement that "he was probably a great deal less politically significant than one would gather from literary sources" (270) will prove less than welcome to many classicists, it is a conclusion based on intimate knowledge of the epigraphic material. The added bonus of this volume is that students and scholars alike will no longer have to dip into a specialist epigraphical journal to find Lambert's thought provoking assessment of Demosthenes' role in Athenian politics.

Also of considerable potential scholarly impact is Lambert's Chapter XVII "Inscribed Treaties ca. 350-321: an Epigraphical Perspective on Athenian Foreign Policy". This chapter provides us with a leading epigraphist's thumbnail account of the history of late Classical Athenian democracy via the epigraphic record, and is therefore of considerable use to any researcher focusing on Athenian politics in this period. In so doing Lambert follows the lead taken by Stephen V. Tracy in his 1995 publication Athenian Democracy in Transition in providing a concise historical context for the published decrees being discussed in that volume.

Of considerable import too is Lambert's Chapter XIV "Restoring Athenian Names". As Lambert reminds us in this chapter, of the 63,000 known Athenian men and women, more than 90% are known only from epigraphic sources. Given that many of these are only partially preserved, we depend entirely upon the skills and methodology of those such as Lambert in restoring these broken names. Scholars of Classical Athens will do well to read Lambert's discussion of the merits of three methodological options of "go back the roots", "avoid overrestoration", and "follow the trend". The table of 76 restored names appended to this chapter demonstrates Lambert's careful yet confident approach to this scholarly conundrum.

Part C comprises just one chapter - "Athenian Chronology 352/1-322/1". No volume focusing on Athenian epigraphy would be complete without a section addressing Athenian chronology, a notoriously tricky subject. Lambert's foray into chronological issues is less confrontational than is often the case, perhaps partly because it was originally published in a Festschrift in honour of M.J. Osborne, and partly because as Lambert puts it "the 4th century is much better served by our sources and all the archons are securely dated" (389). Nonetheless, the fact that Lambert's careful approach to the epigraphic evidence leads us to question previously accepted calendric data is food for thought for those working on late Classical Athens - especially politics and religion.

There are some relatively minor points for criticism. Chapter XIII "Greek Inscriptions in the University Museum, Oxford, Mississippi" jars with the rest of the volume, given that of the six inscriptions discussed only one comes from the years 352/1-322/1. There is a curious inconsistency in the presentation of the not infrequent references to the epigraphic corpus Inscriptiones Graecae. Where Lambert normally presents references to texts from IG in a format such as: IG II2 546, quite frequently the presentation shifts to italicising the fascicule and text rather than the corpus, as in: IG II2 546. This is an inconsistency which one would not expect from the copy editors at Brill. Although the reason for their omission is explained by the author in his preface, the fact that illustrations and plates are referenced but not reproduced here is frustrating for the reader of this work.

This volume is a valuable contribution to Classical scholarship in its own right. But the true value of this volume will be as a complement to Lambert's forthcoming fascicule of IG II3 . It is hard to imagine any serious scholar working on Athenian inscriptions from the last thirty years of Classical democracy picking up IG II3 without also taking up this volume.