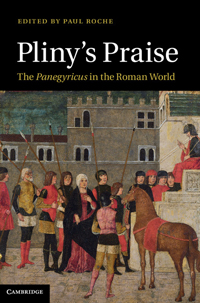 Pliny the Younger can no longer be classified as an author scarcely read and studied by specialists. Among several interesting studies that have recently opened new research lines, I would like to mention two. Regarding Panegyric in Praise of Trajan, Moreno Soldevila's (Madrid, CSIC) 2010 edition mainly contributes an accurate yet clear introduction section that highlights the main debate issue aroused by recent contributions. On the other hand, Rees, Latin Panegyric, Oxford, 2012, gathers an excellent selection of papers on Pliny's Panegyric and the Panegyrici latini collection in which the former has traditionally been included. In his study "The Modern History of Latin Panegyric" (3-48), he proves an impressive mastery of the main points of the whole topic. Both works are a highly recommendable guide for those looking for an updated panoramic perspective on Latin panegyrics in general and Pliny's discourse in particular.

Pliny's Praise is a collective volume that comprises nine studies approaching Pliny's Panegyric from different viewpoints. A Preface and an introductory essay of the Editor (chapter 1, "Pliny's thanksgiving") set the space-time framework and the literary and cultural meaning of this work, and provide a brief presentation of the content in the remaining contributions. These address three broad areas of concern: the historical context of the speech (chapters 2 and 3); the rhetorical and generic contexts informing both this speech and panegyric more generally (chapters 4, 5 and 6), and other three papers focused on literary aspects, the 'sublime' and historical exemplarity in the Panegyricus (chapters 7 and 8), and as a proper epilogue of the volume, chapter 9 examines the afterlife of the Panegyricus in antiquity.

C.F. Noreña (chapter 2, "Self-fashioning in the Panegyricus", 29-44) argues that the written text of the Panegyricus should be seen as an instrument of Pliny's own self-representation and operating alongside other classic Plinian loci of self-definition, such as Ep. 3.11, 7.33 and book 10.

For P. Roche (chapter 3, "The Panegyricus and the monuments of Rome", 45-66), public and private houses, statues and other material legacies are a continuous metaphor for the men themselves. Physical monuments are essentially superfluous to the emperor, who is by definition assured of an eternal legacy. Postery esteem can be guaranteed not by statues but by uirtus ac merita, Pan. 55.10 (quotation on p. 56 is Pan. 28.2-5, not 28.4).

D.C. Innes (chapter 4, "The Panegyricus and rhetorical theory", 67-84) focuses on how Pliny helps build up that portrayal of Trajan as the ideal emperor by his use of the other panegyric headings, proem and epilogue, family, physical qualities, comparisons and good fortune. Unlike Bartsch (Actors in the audience: theatricality and doublespeak from Nero to Hadrian, 1994), Innes argues that Pliny has no credibility problems yet simply makes use of contrast between truth and adulation to enhance his own rhetoric purposes (78f.).

In chapter 5 "Ciceronian praise as a step towards Pliny's Panegyricus" (85-103), G. Manuwald examines the context offered by Ciceronian praise, and thereby isolates key material for assessing Pliny's Panegyricus as a successor to the epideictic culture of late republican Rome. Manuwald suggests that De lege Manilia, Pro Marcello and Philippics can be seen as an important step in the development of political panegyric at Rome and thus as a structural influence on Pliny, that adapted the typological model established by Cicero to the altered conditions, becoming his speech a convenient and ready-made model for later Latin writers.

The interesting study by B. Gibson, chapter 6 "Contemporary contexts" (104-124), concludes that Pliny's attempt to control and define the notions of contemporariness and past is heading for disaster. Language intertextuality and praising common places prove that his praise to Trajan recalls Domitian's praise and, therefore, Pliny's attempt to draw a line between himself and Domitian's times - which is a widely assumed stance not only in Antiquity but also by critics - does not work and thus demands revision.

Chapter 7, G. Hutchinson, "Politics and the sublime in the Panegyricus" (125-141), interrogates the notion of the sublime in the Panegyricus. Some Pliny's letters, especially Ep. 9.26, make clear that sublimity in oratory is a vital concept for Pliny. An extended extract of the speech (Pan. 27.3-29.5) illustrates how the ever undulating presence of the sublime informs Pliny's prose, and its continuous dialogue with other modes and registers of speech. For Hutchinson, on its own imaginative terms the speech offers a remarkable version of the political sublime, although its aesthetics are made inextricable from its political and ethical meaning.

In "Down the Pan' to assess historical exemplarity in the Panegyricus", J. Henderson next (142-174) examines Pliny's treatment of historical exemplarity. Pliny's exempla (Punic wars and last generation of the republic) extend backwards in time to the beginnings of the free republic and through to the living memory of his audience. Henderson attends with especial care to implied continuities and ruptures between the various pasts assembled in the speech. Absences of proper names are also relevant (143) as an index of Pliny's power as panegyrist to bestow or to withhold reification.

Last paper, "Afterwords of praise" (175-188), points out that a total absence of allusion occurs in the works of orators who demonstrably knew Pliny's work, and Pliny (in contrast to Cicero and Hortensius) is never cited by name in the collection of Panegyrici Latini. Pacatus invokes and extends a tradition that could be by precedents in speeches from earlier on in late antiquity. In Rees' summative formulation, Pliny's Panegyricus became in late antiquity 'a model example of what imperial panegyric could be, but not what it had to be' (188).

This book lacks some structure, a clearer thread of consistency, or greater interrelation between the different contributions. All in all, it reaches its aim, as it offers fresh and stimulating ideas on a presumptively scarcely-unappealing work.