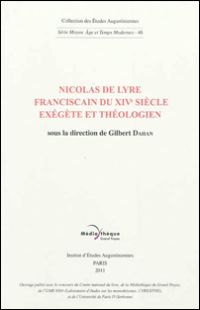 The fruit of a June 2009 conference in Troyes, this volume presents a vivid portrait of ongoing research into the origins, development and impact of Nicholas of Lyra's thought.

The Franciscan Theologian Nicholas of Lyra (d. 1349) was without doubt the most important Latin exegete and hebraist of the fourteenth century. His Postilla litteralis on the Bible, building on previous Latin commentators and on the Hebrew commentary tradition, rapidly became the standard literal commentary in the Latin world, and a fundamental part of Latin Christian thought for centuries; his Postilla moralis was also very successful. In addition, his Quaestio de adventu Christi, derived from a quodlibetal disputation, held in 1309, stands as one of the most important and influential anti-Jewish polemics of the Middle Ages. He authored numerous other sermons, biblical and theological texts, many of which have not been the subject of modern study.

Nicolas de Lyre, franciscain du XIV si&#232cle, exégète et théologien brings together the work of many specialists on different aspects of his work. It divides into four main sections: Nicholas' life and contemporary world, his biblical exegesis, his theology, and the reception of his work. Alongside the volume's formal division into four parts (context, exegesis, theology and reception), the collected studies betray a material distinction between the research on Nicholas the author of the Postillae and the anti-Jewish polemics and those that examine Nicholas as a Franciscan and as a theologian.

Claire Soussen-Max provides an overview of Nicholas' polemical works. Nicholas follows the tradition of anti-Jewish polemics principally by arguing from Jewish sources that the Christ is the Messiah, but he departs from them by claiming to defend from attack the Gospel truth and the Eucharist, and by accusing the Jews of corrupting the Bible to conceal the Christian truth. Philippe Bobichon publishes the first study of Nicholas' reception by Hebrew and Jewish literature; this reception was largely critical: Profiat Duran (1397) and Emmanuel Aboab (ca. 1615-1625) attack Nicholas' Christianizing interpretations of passages from the Hebrew Bible, Hayim Ibn Musa responds and refutes (ca. 1456) the Quaestio de adventu Christi, and Salomon Ibn Verga portrays (ca. 1520) Nicholas in fictional debates between Christians and Jews.

Nicholas of Lyra's Postillae serve as a focal point for the volume. Gilbert Dahan, the editor, studies Lyra's hermeneutics in general, then specifically examines the tension in Lyra's application of a concrete, Aristotelian interpretive scheme with the mythic approach of his Hebrew sources, most notably Rashi. He appeals to the Hebrew text of the Bible at the moments when he cannot make sense of his (faulty) Latin copy. Ari Geiger extends the analysis of Lyra's use of Hebrew sources to include Jewish exegesis. Lydwine Scordia and Emmanuel Bain explore particular themes in the Postilla. Scordia focuses on Romans 13, Royal power, and the duties of subjects towards the king. Bain analyzes Lyra's interpretation of Gospel parables. Three articles treat the Christian reception of the Postillae. Klaus Reinhardt traces the controversy provoked by Paul of Burgos' Additiones to Nicholas' Postilla litteralis. Santiago G. Jalón and Pilar Martín analyze the Spanish translations executed by Alfonso de Algeciras and Alvaro de Sevilla in the 1420s. Finally, Annie Noblesse-Rocher examines Martin Luther's changing postures vis-à-vis Nicholas' Postills.

Two articles are dedicated to free-standing treatises. Philip D. W. Krey provides an overview of Nicholas of Lyra's 1329 Apocalypse Commentary, and Christian Trottmann revisits Nicholas' treatise on the beatific vision in the light of Woodward's 2005 edition. [1]

"Nicolas de Lyre franciscain" is the title of Sophie Delmas' contribution, and presents the status quaestionis on Nicholas of Lyra's Franciscan writings and career, particularly in relation to the Apostolic Poverty controversy. The most important conclusions are negative: Pelster attributes to Nicholas on insufficient grounds the three Franciscan Quodlibeta in Vat. lat. 982; contrary to Rega Wood, Nicholas' moderate affinity for the doctrine of Peter John Olivi would not have excluded him from the role of provincial ministers; against James Matenaer, passages from the postilla cannot be used to show that Nicholas maintained after 1322 the Franciscan teaching on the poverty of Christ and the Apostles; finally, Nicholas of Lyra was not one of the signatories of the declaration of the 1323 Franciscan Chapter General of Perugia.

Nicholas of Lyra's speculative theological work is practically unknown. The ground-breaking contribution of Claire Angotti on Nicholas of Lyra's Sentences commentary outlines the prospects for further research, describing in detail the surviving fragments of his commentary on book I (in a Brussels manuscript), and identifying further lines of inquiry to be pursued in French and Polish libraries.

Finally, a few studies root the Lyra's ideas in context. Gérard Nahon studies Jewish settlement in Normandy up to the expulsion of 1306, synthesizing evidence from documents of record, prescriptive texts, letters, archeological excavations and place-names to reconstruct the communities that probably furnished Nicholas with his knowledge of Hebrew. Olivier Boulnois discusses some of the theological issues contemporary to Nicholas of Lyra, most notably the crisis of theology as a science. Geoffroy Grassin supplies an overview of the Lyrean manuscripts (of the Postilla) and incunabula (of the Postilla and the Quaestio de adventu Christi) in the library of Troyes.

Many of the authors in this collection underscore Nicholas of Lyra's non-controversial approach. While he does innovate in terms of making extensive use of Hebrew sources, and sometimes defending new interpretations of passages, he tends to rely on relatively traditional doctrines and readings, rather than one hotly contested ones; the historical part of his Apocalypse Commentary ends with the First Crusade (162), his position on Apostolic Poverty "s'inscrit dans une tradition bonaventurienne" (28), and he does not defend the positions of Franciscan extremists. Although it is debatable that this conservatism shows an attachment more to the university than to the Franciscan order (as Bain argues, 148), it is certain (as many of the authors argue) that it helped the success of his biblical commentaries. Nicholas of Lyra's commentaries combine an ideologically mild exposition with a comprehensive use of Hebrew, Patristic, and Aristotelian sources, and as such it served directly the mission of medieval universities.

The volume provides an excellent synopsis of the state of research on the fourteenth-century Franciscan exegete and theologian, and advances it on all fronts. Concerning the biblical commentaries and anti-Jewish polemics, Nicolas de Lyre makes concrete advances in the analysis of Nicholas' method, aims, and ideas, and publishes some of the first assessments of the reception of these works. His affiliation among the movements of the Franciscan order is unclear, and attribution to him of many university writings is uncertain, and this volume points to future avenues of investigation.

The only discordant notes in this book mirror the state of Nicholas of Lyra scholarship. Each author refers to a different edition of Nicholas' Postilla. Bain implies that the Postilla existed in two versions, and demonstrates that at least part of the commentary on Matthew dates to 1308 (143-144); Delmas argues that the Postilla litteralis was completed in 1331, and that the gospels are "antérieur à 1322" (26). Similarly, the revision history of the Postilla itself needs investigation. Nicholas of Lyra's major anti-Jewish treatise goes by several names: Soussen-Max announces that she will refer to the Quaestio de adventu Messiae as the Quaestiones disputatae (51), Boulnois calls it the Quaestio de Adventu Christi, and associates it with "L'attente de la fin des temps" (216), and Bobichon refers to it as the Quodlibet (291). The multiple names and the versions attest to the importance of Lyra's work and to its complex textual stratigraphy, and underlines the merit of this contribution.