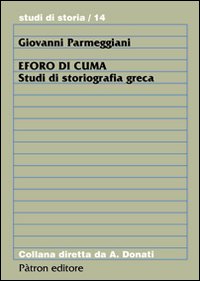 The present monograph of no less than 808 dense pages is Giovanni Parmeggiani's revised PhD thesis (Bologna 2003). Born out of a 'highly passionate' engagement with studying the fragments of Ephorus (5), the book seeks to rescue this historian from a configuration of prejudices, which has made him into the embodiment of anything that went wrong with Greek historiography after Thucydides. For too long scholars have based their assessment of Ephorus mainly on the extensive use of his Histories by later writers, most notably Diodorus, rather than by undertaking a painstaking analysis of the fragmentary remains. Parmeggiani holds the view that this approach has to be reversed. From here it follows logically that his book is chiefly organized as a series of chapters - seven out of a total of ten - concerned with a searching examination of the testimonia and fragments.

The work begins with a coherently structured part focusing on 'views'. First is examined how Ephorus has been viewed by others, modern scholars (9-25) as well as ancient readers (27-79). Chapters II-IV deal with the evidence for Ephorus' own view of his task: how he positioned himself as a historian, most conspicuously in his general preface (81-97), in relation to other branches of literature (rhetoric, poetry) and art (music), how he defined the scope of his work - koinai praxeis of Greeks and Barbarians from the 'Return of the Heracleidai' down to his own time -, and reflected on the means, evidence and critical procedures, for carrying it out (109-146). A well-crafted synthesis (147-153) recapitulates the main results.

The central, most bulky part consists of an exhaustive study of the fragmentary remains of the thirty books of Ephorus' universal history. The discussion follows the order of the books to which the fragments belong or can be attributed. Thus, questions of content, Ephorus' structuring of his account kata genos (according to Parmeggiani, in chronologically rather than geographically or thematically coherent units) and other features of his narration and view of the Greek past are examined respectively for the first (154-347), second (395-535) and third (537-625) decades of the Historiai. In between 'books I-X' and 'books XI-XX', the analysis pauses for a reflection on the "Limits and possibilities of using Diodorus' Bibliothèkè historikè for identifying the contents of the Historiai" (349-394). The focus on 'contents' indicates that Parmeggiani tends to dismiss Diodorus as a (re)source for evaluating Ephorus' method. With due caution, however, and never under the system of the formula Ephorus/Diodorus , the 'Historical Library' can continue to render services in providing us, in comparison to the often meagre fragments, with a more substantive idea of the historical matter covered in the lost work.

The book's two ultimate chapters are an attempt at synthesis. Ephorus' historiographical praxis, as shown by the foregoing analysis, gets evaluated in the light of the historical theory outlined at the beginning of the book (627-632). The portrait of the universal historian (709-733) takes its cue from Polybius' acknowledgement of the historian of Cyme as his one and only predecessor in the field of universal history writing. Although Polybius wrote a more synchronic and Ephorus a more diachronic type of universal history, Parmeggiani looks for the common elements which may be termed distinctively universal in their approach to history such as the peculiar attention given to geography and constitutional matters, the key-role of hegemony, causal analysis and the interconnection of events. A thorough bibliography, a full Index Locorum, and an Index of names, notable words and subjects complete the volume.

Up to now, we only had G.L. Barber's monograph on Ephorus, a work which appeared in 1935 and was already, by then, judged as falling short of its ambition to rehabilitate him as a historian. Parmeggiani brilliantly meets that goal. From his work Ephorus emerges as a great and significant IVth century B.C. Greek historian: "the authentic keystone in the history of the historiographical method from Thucydides to Polybius", to quote a phrase (146). The 'authentic enthusiasm' (5) the author has invested in exploring his subject, may not be alien to such a decidedly positive portrayal. Yet, the overall picture he draws is convincing, solidly backed as it is by the comprehensiveness and depth of his research. Exuding that same ambition of diakriboun which he identifies in his hero (F 122a), Parmeggiani has left no stone unturned, descending back, for instance, to the work of many 19th century a scholar, in order to eradicate the roots of misconceptions, such as the 'positivistic' notion of 'rhetorical historiography' or the closely related view of Diodorus' XI-XV as a 'continuous excerpt' from Ephorus.

As marked features of the new portrait may be singled out Ephorus' reliance on a varied spectrum of good sources (primary materials and written evidence contemporaneous to the events) and the seriousness of his critical research in pursuit of the truth, qualities to be vindicated also in numerous cases where he supplemented the standard accounts of Herodotus and Thucydides or he decided to deviate from them. Another noteworthy aspect is Ephorus' meta-historical awareness of the problems of history writing. No doubt prompted by the novelty and ambitious character of his undertaking, Ephorus interrogated himself on how to transcend the narrow principles laid down by Thucydides and still write history in a responsible way, in particular of periods remote in time. Ephorus saw history writing as an independent intellectual endeavour and as a literary genre of its own (147).

Parmeggiani carries out his research in a critical and independent spirit. Among the many scholars who have to pass the test of his ever alert critical attention, Jacoby ranks first, and for reason. Within the framework of his view which makes the creative development of Greek historiography culminate and, at once, end in Thucydides' history of the Peloponnesian War, the great German scholar has played a leading role in consolidating, in the wake of U. von Wilamowitz and E. Schwartz, the damning view of Ephorus as a mere rhetorical compiler more interested in stylistic embellishment and in conveying moral lessons than in the quest for truth (12). At times, however, Parmeggiani seems to be a bit overzealous. What, for instance, is the point in remarking that Jacoby has included P Oxy 1610 with "eccessiva confidenza" (376) among the fragments of Ephorus, if, after all, F 191 is printed in petit and Parmeggiani eventually shares Jacoby's view on all essential points (376-382)? More serious, however, are the steady complaints that Jacoby has cut his edition of the fragments, and especially of the testimonia, too short, in a way that students, using his edition, are deprived of elements deemed essential to an adequate interpretation (27-79). The editor of FGrHist 70 is even suspected of some opinionated subjectivity in selecting the passages published as testimonia and in presenting them in a way as to endorse his overall depreciation of Ephorus (30). It is, of course, imperative, in any study of a fragmentary historian, to take into account the full text of the later authorities from which both fragments and testimonies are taken. But a student of Ephorus, it seems to me, can only be misled by Jacoby's presentation of the evidence inasmuch as he or she makes an improper use of FGrHist 70: in other words, if, in evaluating a testimonium, one just looks at the portion of text that is actually printed and disregards the always present cross-reference to the full text from which the testimonium has been cut out. All there is to say, then, is that Jacoby avoided duplicating the printing of the same text. This may be inconvenient to some extent - one has to turn to another page in FgrHist, perhaps even to another volume - , but, in the framework of his huge undertaking, Jacoby had his own good reasons for observing such a rule, going from reducing the cost of printing to the explicit warnings given in the Prefaces to FgrHist I and II, namely, that there is quite a difference between what one can expect from a monograph on a fragmentary historian and an edition of his fragments: the latter can barely lay the basis for the former.

Facing the challenge of having to argue his case from a limited and defective body of texts, Parmeggiani sometimes presses the evidence to say more than it can. For instance, where it is maintained, inter alia with reference to the supposed presence of Ephorus behind Plb. 12,4b, 4-5, that his affirmation (in the modus irrealis) of the superior value of autopsy (F 110) should be seen as part of an argument which stressed the necessity of supplementing the partial information that can be gained by the historian's personal presence on the spot "by inquiring from as many people as possible". Parmeggiani seems to overstate his case also when he attempts to show that Ephorus' synkrisis between history and rhetoric (F 111) included more than just the two items which Polybius explicitly names as the terms of the comparison: first, the difference between 'truth' and the 'semblance of truth' and, second, the laborious gathering of the materials for an account based on evidence (124-139). To be sure, Ephorus expressed himself also on the difference between history and epideictic speech with regard to style (lexis) (F 107) and arrangement of the composition (oikonomia) (T 11 & 23) (155-164). But as such, these texts are incapable of proving Polybius wrong.

Parmeggiani's monograph bears the subtitle "Studi di storiografia greca". It tackles so many fundamental issues such as rhetorical historiography, moralising, search for truth, etc. that its significance reaches, indeed, far beyond Ephorus. In the years to come, students of Greek historiography will have to think the consequences through of the important and innovative results which have been reached here. By and large, the 'new' Ephorus brings us back to Niebuhr's appraisal given at the very beginning of modern research on Ephorus: "Er war ein höchst wahrhafter Mann und hatte historisches Talent zur Kritik und Untersuchung; er ist der Erste, der eigentlich historische Kritik in einem großen Umfange angewendet hat, und bei dem die Geschichte als wissenschaftliche Disziplin erscheint." [1] In many respects, Parmeggiani's book holds the key for an entire revision of the ways we use to conceptualise and write the history of Greek historiography. It would be a pity if it's intimidating bulk together with the fact that it is written in an Italian, which in my experience requires a more than average familiarity with that language, might somehow put off readers or hinder its widest possible circulation. If the author would consider the publication of his work in a reduced English translation, he would do the scholarly world a real service.