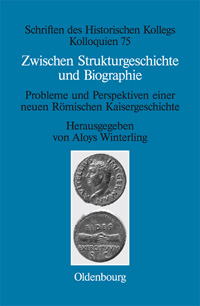 This thoughtful volume, arising from a 2007 conference, confronts the familiar problem of how, or even whether, historical studies of individual Roman emperors should be written. [1] As its editor points out in his preface (vii-viii), even as historians shifted attention in the twentieth century from constitutional to social subjects such as patronage, the Caesars themselves, as individuals, tended to be downplayed in historical research. They were left more to biographers, who did not necessarily have historical objectives or who saw emperors as windows onto a whole age rather than the imperial office. (Some scholars, I would emphasize, did successfully blend history with biography, such as Miriam Griffin on Nero and Barbara Levick on Tiberius. [2]) Too often judgments of particular reigns simply hearkened back to the moralizing of ancient sources.

In numerous publications, including a most stimulating book on the emperor Caligula, Winterling has devoted much thought to this overall problem and his introductory paper, "Zu Theorie und Methode einer neuen Römischen Kaisergeschichte" (1-11) is essential for this volume as a whole. [3] Looking back to Alfred von Domaszewksi's classic Geschichte der römischen Kaiser, he begins by discussing the limitations of earlier Kaisergeschichte, such as its narrow focus on the city of Rome. These limitations, along with the difficulties posed by the literary sources, led scholars to focus less on Caesars than "das Kaisertum" overall. As individual personalities were banished from historical syntheses, so too, at least to a degree, was the contingent force of their characters. Today's Kaisergeschichte, Winterling pleads, must successfully marry structural history with biographical investigation; "[i]hr Ziel wird sein, auf der Basis von Forschungen zu den Strukturen der Politik, der gesellschaftlichen Rangordnung und der inneraristokratischen Nahbeziehungen im kaiserzeitlichen Rom zunächst quellenkritische Analysen der antiken Überliefergung zu den Kaisern anzustellen" (8-9). This is histoire événementielle that rests on a solid base of structural analysis. Especially important, structurally speaking, is the imperial court, understanding of which has dramatically improved thanks to recent studies, including again important work by Winterling. [4]

The Kaisergeschichte envisioned here, Winterling remarks (11), "ist leichter zu postulieren als zu realisieren" (11), and the rest of the volume is essentially intended as preliminary studies for it. Ralf van den Hoff leads off Part I ("Quellen") with an excellent overview of visual depictions of the emperor, focusing on their communicative functions; a short sketch of the changing image of emperors from Augustus to Septimius Severus is followed by more in-depth analysis of Augustus and Tiberius. Charting the many innovations shows the role of princeps was dynamic and furnishes important evidence for Kaisergeschichte. A long chapter by Christian Witschel on Kaiserinschriften (inscriptions that refer in some way to the emperor) comes next and nicely complements van den Hoff's discussion: inscriptions are invaluable evidence for the dissemination of imperial image and dialogue between emperor and ruled, Witschel shows with many examples, while also emphasizing methodological problems they pose. In the final chapter of Part I Martin Hose covers literary sources through a valuable case-study of Cassius Dio, arguing that the historian's accounts of emperors cumulatively lay down normative boundaries for imperial conduct. It follows that historians of a particular Caesar using Cassius Dio need to acquaint themselves with Dio's history as a whole.

The second part of the volume treats the subject of "Strukturprobleme kaiserlicher Handlungsfelder" through four contributions. Dieter Timpe reviews modern views of the principate, thoughtfully discussing first Mommsen's work and then major strands of scholarship since. In "Der Kaiser, die republikanischen Institutionen und die kaiserliche Verwaltung" Christer Bruun examines the political and administrative institutions with which emperors operated, including the familia Caesaris. Martin Zimmermann has a rich topic in "Die Repräsentation des kaiserlichen Ranges," which he examines in various of its facets (e.g., insignia, costumes, rituals), while also outlining areas for further work, including more finely-grained analysis of emperors' communications with different strata of Roman society. Aloys Winterling fruitfully examines the tensions between the traditional "multipolar" friendships of Roman aristocrats and the new hierarchies of the principate, negotiated with varying success and results by different emperors.

In the third and final part ("Fragestellungen und Deutungsmuster der biographischen Forschung"), contributors, beginning with Uwe Walter on Augustus and Tiberius, primarily survey previous biographical study of particular emperors. The résumés throughout are useful, often incorporating sharp observations or fruitful suggestions. In a chapter on Caligula, Claudius, and Nero ("Zwischen ratio und Wahn"), Christian Ronning memorably writes of the difficulties these three emperors faced; what Augustus and Tiberius left "war 'staatsrechtlich' bzw. 'staatsorganisatorisch' mindestens ebenson monströs wie die Protagonisten: eine Monarchie, die sich als Republik gewandete" (253). Gunnar Seelentag, covering "Trajan, Hadrian und Antoninus Pius" first covers the literature on his emperors and then through a brief case study suggests the limitations of this work: when focused on just one emperor, discussions of Trajan's "politics of conquest" and development of the Italian alimenta, Hadrian's imperial journeys, and Antoninus Pius' long residence in Italy, miss significant continuities and discontinuities across these reigns. Also in this section is Dirk Schnurbusch's discussion of the major themes of Flavian biographies and suggested areas for further research and a final chapter by Olivier Hekster arguing that chance survivals along with a taste for the exceptional have colored modern perceptions of the reigns of Marcus Aurelius and Commodus.

Whatever the difficulties of the sources, biographies of emperors will continue to be written, such is the fascination they, and ancient Rome, offer. Winterling has helped to open up another type of investigation, one focused especially on the way emperors communicated with the senatorial aristocracy. There are other possibilities too, for examples studies of emperors focused on their building projects, in Rome and across the empire. [5] All researchers will find value in the contributions assembled here, made even more useful by the thorough indices of subjects, persons, places, and sources. Reasonably priced, this book belongs in all research libraries.

[5] As already exemplified by Mary T. Boatwright: Hadrian and the Cities of the Roman Empire, Princeton 2000.