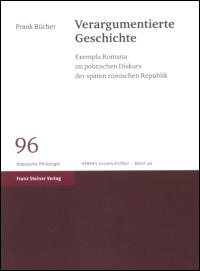 The example (Greek paradeigma, Latin exemplum) played an important role in the ancient art of rhetoric. Yet, as recent scholarship has emphasized (e.g., Matthew Roller, Classical Philology 99 [2004]: 1-56), the culture of Rome in particular was more deeply steeped in practices of exemplarity: from past history an array of models was called upon to shape - and pass judgment on - the present. It was a clever idea, then, for Franz Bücher to write a study that contextualizes the use of exempla in the oratory of the later Roman Republic (i.e., mainly Cicero) within Rome's larger exemplary culture. This book's real value lies not so much in any major revision of how one should view that exemplary culture, but in a copious gathering of the exempla Cicero deploys - fuller than that of the more literary study of Hans Schönberger (Augsburg, 1910) - and some preliminary conclusions on their strategic value to the orator, as well as their cultural significance. Scholars will gratefully draw on the data gathered here, and use it for other related inquiries.

At the heart of this book lies a table which documents the appearance of no fewer than 1431 exempla in 64 full or fragmentary speeches of Cicero. "Diese Tabelle," Bücher explains, "kann aus drucktechnischen Gründen nicht in Papierform beigegeben werden. Der Ausdruck mißt in der Länge 1,15 m und in der Breite 0,75 m, wobei die Schriftgröße mit 8 Punkt gerade noch Lesbarkeit zuläßt" (157 n. 18). Thus, the publishers have included separately a CD-ROM with this database, as a file in both PDF and Microsoft Excel format (the latter is easier to use), with exempla in rows and speeches in columns.

What are the actual exempla included? Taking into account rhetorical theory and etymology (cf. Hildegard Kornhardt, Exemplum [Göttingen, 1936]), the author considers an exemplum "was aus der Vergangenheit zum Zwecke gegenwärtiger Überzeugungsarbeit eines Redners herausgenommen wird" (154). This includes a great number of individually known men, but also groups both named and unnamed (including Metelli, Luculli, Gallier, maiores), as well as wars and battles (e.g., Krieg gegen Pyrrhos, Cannae), other episodes (Zerstörung Korinths, Ehrung der Mars-Legion), laws (e.g., 12 Tafelrecht, leges Porciae), places (Athen), or more abstract concepts (e.g., Gefahr der Königsherrschaft, rustica parsimonia). Altogether this adds up to 374 rubrics. One might quibble with some of Bücher's choices, but it surely is better to cast the net as widely as he did.

The database provides the backbone for the third, and major, part of the study (entitled "Verargumentierte Geschichte"), to which I shall return. The first two parts cover familiar topics and could have been shorter, though they do provide a good summary of recent work on the political culture of the Roman Republic. In Part I, Bücher examines "Die politische Klasse und ihre Kommunikation mit dem populus Romanus." An opening sketch brilliantly evokes the performing orator, and Chapter 1 seeks to establish speech as the day-to-day means of political communication in the Republic; writing is dismissed as basically irrelevant, but this underestimates its increasing importance in Cicero's lifetime, when the scene of politics could shift from Rome to the camps and conclaves of military governors. Bücher emphasizes the mechanics of the contio in particular, at which the Roman politican had to be prepared to speak before the people. Chapter 2 thus dwells on the training orators received (and also, in line with recent scholarship, defends the use of Cicero's published speeches for a study of the practices of real oratory). In the third chapter, the competitive culture of the ruling class is emphasized, the role history played in promoting their hegemony - history was 'kein (nationales) Abstraktum, das gelehrten Spezialwissenschaftlern vorbehalten blieb, sondern konkrete und vor allem eigene Erinnerung' (86) - and also the increasing divide between the living young and old in the late Republic. This last topic is of special interest; and Bücher might have considered further whether history was as tightly and uniformly controlled by the ruling class as he seems to imply; for a different perspective, see T. P. Wiseman, The Myths of Rome (Exeter, 2004).

Part II ("Politischer Diskurs und seine römische Matrix") underscores the role of memory in Rome and Rome's political discourse, a topic much treated in recent German scholarship as well as the writings of Harriet Flower. Bücher again emphasizes a distinction between history, as generally conceived now, and memory (indeed, 'Die Historie tilge die Erinnerung aus', 106), viewing Rome as a place where memories of the aristocracy's successes were everywhere to be heard or seen - in the house and at funerals, in the monuments of the City's public spaces, on coins, at triumphs and the theater; history writing was of little significance, Bücher argues, a fact reflected by Cicero's own literary career. In all this, "Der Tenor des Erfolgs ist unverkennbar" (147), but it is worth recalling that the stories the Romans told of their past had some surprisingly dark elements - a fact brought out by Cicero's own use of exempla.

With Part III, and the analysis of those exempla, Bücher makes his real impact. Naturally it would have been impossible to do full justice to the subject, and Bücher wisely focuses on a miscellany of topics. His starting point is the important observation that within Cicero's speeches more exempla (especially of named individuals) come from Cicero's lifetime or the two generations or so immediately preceding him, allowing a flexible concept of earlier maiores who stand for religious and legal authority and military success - and who are of a suspicious homogeneity of belief (Chapter 2). Very early exempla thus require different treatment from those which are later, and selected case studies (presented in Chapter 3), backed up with the data accumulated from the whole corpus, yield useful observations (e.g., L. Iunius Brutus, cos. 509 BC and related exempla suddenly become very important for Cicero after the Ides of March not just because of the two Bruti who plotted against Caesar but also the preoccupation with libertas). The places in which speeches were delivered is another relevant factor (Chapter 4). Examples from the First and Second Punic War show Cicero's divergences from the historiographic tradition, and an excursus on De senectute shows that Cicero's Cato, not surprisingly, cites some more recherché exempla (Chapter 5). Chapter 6 looks at differences between use of exempla in speeches to the Senate and People, which seem to be subtle, but contiones might focus more on danger; Chapter 7 studies several prominent individuals (Cato the Elder, Scipio Aemilianus, Sulla, etc.); Chapter 8 accounts for Cicero's greater than usual focus on earlier exempla in pro Plancio; Chapter 9 shows how the Caesarian orations work to exclude Caesar from Republican memoria; and Chapter 10 looks at Cicero's creation of new exempla: Catiline as an exemplum malum and the assassins of Caesar as liberators of the fatherland: exemplum facti reliquerunt (Phil. 2.114).

The approach in Part III is suitably eclectic, taking into account cultural as well as rhetorical considerations to analyze Cicero's use of exempla. Yet in treating Cicero as typical of Republican oratory and political discourse more generally, we risk losing sight of his own contributions to the tradition: was there not, in the end, something novel in his treatment of a figure such as Catiline throughout his published speeches? And, as we read these speeches even today, must we not consider how in writing them, along with his theoretical works on oratory, Cicero created his own more permanent monumenta, with a source of new exempla on which others could, and did, draw? Bücher has written a valuable and useful study. But in his examination of the surviving texts of Cicero's orations he has in my opinion slighted one interesting and important problem that their very existence raises for the study of Rome's culture of memory.