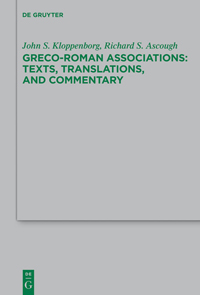 This book presents and comments on a selection of 91 published inscriptions pertaining to the Greco-Roman associations in Attica, Central Greece, Macedonia, and Thrace. Two more volumes are planned to follow: one covering 'Asia, the Aegean islands, the Bosporos region and Syria-Palestine'; and another covering 'Egypt, North Africa, Italy, Germany, Pannonia, Dacia, and Moesia' (p.v-vi). Originating in a New Testament studies context, and predicated on the existence of a link between the Greco-Roman associations and Christ-groups [1], this work has as its principal aim 'to provide a "thick" context for the study of the associative practices of the Christ groups in the cities of the Empire' (p.vi): their organization, activities, finances, recruitment practices, etc. Yet the book's usefulness is much wider than this statement indicates. It is a most welcome, and long-needed addition to a briskly growing body of literature on the private associations of the ancient world, to which Kloppenborg and Ascough themselves have already made valuable contributions. [2] They deserve our gratitude for providing us with an independent sourcebook on the ancient associations.

Except for two Latin texts (nos. 68a-d and 71, both from Philippoi, Macedonia) the inscriptions are in Greek. The material is organized most sensibly and in a user-friendly manner. After a brief Introduction (1-13), Kloppenborg and Ascough present the 91 texts, which are distributed as follows: Attica 55 (C4 BCE - C3 CE), Central Greece (Boeotia, Megara, Locris) 6 (C4 BCE - C2 CE), Macedonia 21 (C1 BCE - C3 CE), and Thrace 9 (C1 BCE - C3 CE). This, of course, reflects the predominance of the Attic texts among the extant inscriptions, though one wonders whether our epigraphic collections (e.g. Roesch 1982) could have provided additional examples to redress somewhat the very uneven representation of the non-Attic regions. Within each region, the texts are arranged chronologically (Attica) or by city / locality (the rest). In the entry devoted to each inscription, Kloppenborg and Ascough reproduce the Greek text, not as read through an autopsy of the stone, but as given in one of the main epigraphic corpora (for Attica predominantly IG II2). A lemma provides information on the provenance, date, editio princeps, the physical characteristics of the stone, lettering, and references to 'similar inscriptions'. The English translation that follows indicates unrestored lacunae but does not provide indication for restored text. A section labelled 'Notes' contains some form of epigraphic commentary, but mostly offers miscellaneous comments on individual Greek words or phrases (regarding prosopography, chronology, and terminology). Another section, labelled 'Comments', provides contextual details about the document and the association it attests: e.g. issues of chronology, possible parallels or connections to other bodies, explanation of special features regarding organization, membership, activities, etc., and other such matters. Rounding off the volume (407-88) there is a Bibliography, 10 indices and a Concordance of Inscriptions.

The 91 texts themselves, alongside Kloppenborg's and Ascough's detailed commentary, provide a wealth of information regarding the associative life of the regions treated in this volume. Particularly the material from Attica, because of its richness and great chronological coverage, makes it possible to investigate patterns of organization, membership composition, and other features over a large time-span; this is, for instance, the case with the associations of worshippers of Bendis. Precious insights, too, are provided by the well-known rules (dogmata) of the Iobakchoi (no. 51: IG II2 1368) and of a group of eranistai who called themselves Herakleistai hoi en Limnais (no. 50: SEG 31.122), both of which are paralleled by the regulations of the 'Thiasos of Amandos' in Locris (no. 61: IG IX 12 670). Finally, equally important texts stem from the other regions, e.g. the extensive membership lists from C2 CE Philippoi, Macedonia (no. 68a-d = CIL III 633). All in all, the principles used for the selection of texts work well, representing fairly not only various types of documents (honorific decrees, nomoi, dedications, membership lists, etc.) but also associations of various orientations.

There are, however, some shortcomings. There is no proper index locorum: to track down occurrences of IG II2 1322, for example, one has to look under Amphieraistai in Indices V (430) and VI (432), and for occurrences of IGUR 160 (p.vii, 254, 381, 354, 394-5) one must chase the references to Bakcheion in index VIII. A number of typos could have been easily avoided (18: 'Diodoros Siculos' [not in Index X]); better care ought to have been given to the production of the maps (Laurion and Acharnai in Attica are misplaced); and some comments seem irrelevant: on page 267 the reader is informed that skordon (garlic) is a perennial vegetable. More importantly, especially because the sourcebook is also aimed at users less familiar with ancient Greek, the translations are often inaccurate or misleading. I list a small sample: τῶν | προέδρων ἐπεψήφιζεν Φα|νόστρατος Φιλαΐδης (no. 3, ll. 28-30) cannot mean 'the question was put by Phanostratos', but rather 'of the proedroi Phanostratos Philaides was putting (the proposal) to the vote'; χωρίου ἔνκτησις (ibid. l. 36) does not mean 'the lease of the land', but 'the right to acquire a plot of land'; εὐθύναι, in the context of no. 11, l. 10, cannot mean 'public accounting', but 'the rendering of accounts'; καὶ τὰ πρὸς | τοὺς ἂλλους ἐξελογίσατο (ibid. ll. 11-12) does not mean 'and what he had delegated to others', but rather 'and those (financial) matters regarding which he had reckoned against the others' (i.e. those of the associates who, too, had handled associational funds, in contradistinction to those matters of which he himself was in charge, αὐτὸς ἐκυρίευσεν); ἀνάθημα (ll. 25-6, 33-4) is a 'dedication', not 'a votive plaque'; τοὺς ἐπιμελτὰς τοὺς μετὰ Δημο | κλέα (no. 15, ll.34-5) cannot mean 'The supervisors for the year following Demokles' archonship', but rather the overseers serving together with Demokles'; τῶν ἐν Ῥαμνοῠντι ταττομένων πολιτῶν (no. 27, ll.1-12) does not mean 'the citizens of Rhamnous who had been appointed', but 'those citizens who perform military service in Rhamnous'.

In the light of these and further inaccuracies, caution is recommended when using the translated texts which, as in similar sourcebooks, ought to have indicated which part of the text is a modern restoration. One hopes that the two volumes to follow will be free of such shortcomings.