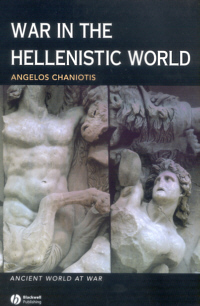 Angelos Chaniotis is a widely-known specialist in Hellenistic history and epigraphy, with an impressive publication record. In this book, he treats the important topic of war in the Hellenistic world. M. Launey's Recherches sur les armées hellénistiques is highly informative on military and political developments, while the study focusing on the socio-cultural aspects, Y. Garlan's La guerre dans l'antiquité, treats the Hellenistic Age as part of a larger period. [1] A modern treatment of the social and cultural aspects of warfare in Hellenistic times has thus been lacking. Chaniotis has now filled this lacuna in an excellent manner.

Chaniotis' aim is 'to survey the ways in which war shaped Hellenistic society, mentality, and culture, and to explore how wars corresponded to contemporary social and cultural conditions. Sensibly, no comprehensive coverage of every topic is attempted; technical aspects (i.e. tactics, weapons, etc.) are deliberately excluded. Instead, Chaniotis offers a more selective, thematically well- focussed account, guided by his informed opinion about which aspects really mattered. The task, nonetheless, remains an enormous and challenging one. Chaniotis deserves praise for carrying it out with elegance and erudition.

The book is chiefly written for students of classics and history and is arranged accordingly. Besides an up-to-date bibliography, a list of abbreviations and three indices, it offers a useful Table of Important Events. Instead of foot- or endnotes, Chaniotis has key references in the main text and lists sources and modern works in a Further Reading section that ends each chapter. Throughout, he sees to it that the reader remains firmly in touch with the source material, giving faithful translations of relevant texts, whether from papyri, inscriptions or the ancient historians. In twelve well-written and well-documented chapters, Chaniotis discusses a broad range of topics relating to the impact of war on Hellenistic societies, noting changes and continuities, and setting his theme in a larger context.

In chapter 1 ("The Ubiquitous War"), Chaniotis demonstrates the omnipresence of war in this period, the Big wars fought by the great monarchies and Rome and the Small wars between city-states. War could be seen, heard, smelled and lived everywhere. Appropriately, Chaniotis lists here the "reasons" and "factors" for wars: material profit, pride honour and justice, but also the kings' expansionist endeavours and the struggle of cities for autonomy. More fundamental, though, is the power vacuum created after Alexander, which left a huge geographical area without unified rule.

Chapters 2 through 6 investigate how war impinged on central institutions and population groups; the perspective is that of the polis. Chapter 2 ("Between Civic Duties and Oligarchic Aspirations") treats the nexus between military service and civic identity, manifested in the continuing importance of citizen militias. Communal defence offered also opportunities to local elites to excel as military leaders and generous benefactors. Democratically governed poleis thus increasingly fostered an ideology of inequality (37). More significantly, city aristocracies consolidated their economic position to such a degree that they could continue to exist almost unchallenged into the Roman Imperial period (41). Chapter 3 ("The Age of War: Fighting Young Men") looks at the institutions through which poleis, not least those on Crete, organized and trained their core groups (e.g. the ephebeia), and also at public festivals as means of socializing young men into the warrior ethos. Chapters 5 and 6 turn to political outsiders: not only the numerous mercenaries, but also such professionals as doctors, trainers and inventors of war machines. Mercenary service is one of the most significant phenomena of the period, whose causes, however, remain elusive: demographic pressures, land shortages and local military traditions (as in Crete and Aitolia) are seen to have played a leading role. It is refreshing to find here (chapter 6: "The Gender of War") a thought-provoking treatment of a topic rarely encountered in war studies. Though war is typically associated to masculinity, Chaniotis brings clearly out the contribution women, who boosted morale as judges of the men's performance, or participated in city guerrilla fighting, or made financial contributions to the war effort.

In chapters 7 through 11, Chaniotis broadens his perspective by surveying five major areas. Economic matters are treated in chapter 7 ("The Cost and Profit of War"), where Chaniotis discusses war's influence on state budgets and fiscal schemes. Booty (territorial acquisitions, persons, etc.) was both a motive and a means of warfare. One of the main messages of this study is the great impact war had on the Hellenistic economy by redistributing material goods, land and money, without creating intolerable misery for all. The coming of Rome, however, changed this in a dramatic way: war indemnities, taxation and Roman exploitative intervention in local economies pushed misery up to unseen levels (139 f.). Chapter 8 ("An Age of Miracles and Saviors") focuses on religion. Chaniotis argues convincingly that this is the age of miracles and Saviours (soteres). Deities are ever-present in warfare as protectors of cities and troops. That the religious aspects of war became more significant in this period is reflected in the great number of divine interventions, appeals to Saviours (gods or deified mortals) and dedications in sanctuaries. War contributed also to major, long-distance cult transfers, and fostered religious beliefs and attitudes: a traditional belief in the supernatural (i.e. phenomena interpreted as divine intervention) co-existed with cool pragmatism.

Chapter 9 ("The Discourse of War") shows how images of personal suffering and despair are blended with those of hope for improvement. A taste for dramatic descriptions of collective suffering, a feeling of superiority and a competitive spirit are in evidence here. In discussing how wars were justified, Chaniotis presents some illuminating examples (e.g. 174: discussion in Attalos II's court). Chapter 10 ("Aesthetics of War") examines the portrayal of violence in literature and art. Visual or literary representations, often subtle, demonstrate an interest in realism, not in violence itself. In visual the arts, war chiefly invaded the public space (e.g. the dying Gauls statuary in Pergamon). In literature, it is the historians' blood-dripping representations that attract attention, because of the exploitation of peripeteiai ("unexpected changes of fortune") as a central theme (207 f.). The Hellenistic period, it is argued, fostered "a culture of on-lookers" (212). "The Memory of War" is treated in chapter 11. Chaniotis distinguishes here (215) between collective memory (wars of the recent past) and cultural memory (wars of the mythical or remote past). From this, he proceeds to examine the chief means by which the memory of war was preserved in historiography, monumental historiography, oral commemoration, commemorative anniversaries and war monuments. What civic communities mostly got out of the memory of war, Chaniotis concludes, was not education, but a strong sense of togetherness, commemoration of wars was a factor in the construction of identity (241).

In the concluding chapter 12 ("Breaking boundaries: How War Shaped the Hellenistic World"), Chaniotis lists the main areas in which war caused major changes by moving legal, social, cultural or territorial boundaries. Yet war is simultaneously seen to have been a force that helped to maintain or even consolidate traditional boundaries. Paradoxically, in the Hellenistic period war, by increasing the number of alliances and diplomatic links, created an extensive network of political relations, a process that favoured the Roman aggrandizement. Also, war enabled the wealthy benefactors to attain a far more prominent position than they had before. But perhaps the most fundamental boundary to be broken was that between mortals and the gods, as mortals were made into gods and gods were brought down to earth.

The book bristles with good points and contains a wealth of information, either of which results from Chaniotis expertise in the handling of especially the epigraphic material. Thanks to his labours, a new scholarly agenda for the study of ancient war is now emerging, even if the overall approach and methodology still remain traditional. This reviewer has used the book in several courses, with great success. Especially students, however, will not find here much about scholarly debates on the interpretation of our evidence, nor will they always be guided to opinions that differ from Chaniotis' own. Also, with a single exception (215: on cultural memory), Chaniotis spends little time on theory or definitions. But on the other hand, he - in my view, appropriately and instructively - makes occasionally reference to present-day events (e.g. 143, 179) in order to show the continuing relevance of the issues he discusses. I have noted only one or two misprints (e.g.151: Troglodike for Troglodytike) or omissions (e.g. Crawford 1984, listed 101, is not in bibliography). All these, however, are minor quibbles. Chaniotis has treated his subject with finesse and scholarly vigour. The book will be required reading for students of war and culture in Hellenistic times, and an indispensable work for any scholar interested in ancient warfare.