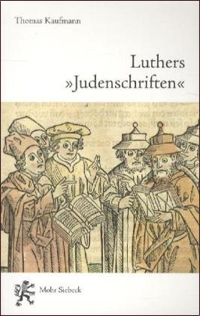 Noting the significant, and often subjective, attention that the Jewish writings of Martin Luther have received throughout history, Thomas Kaufmann, the noted Luther scholar and one of the leading and most creative historians of early modern Germany, provides in this volume a more nuanced historical contextualization of them. Kaufmann provides a very readable overview that assesses the "Sitz im Leben" of Luther's arguments with the Jews; Luther's position regarding the Jews within the context of late medieval and contemporary sixteenth-century discussions; the continuities and ruptures in Luther's position toward the Jews during his own career; and the reception and impact of Luther's "Jewish writings" in the sixteenth century and beyond. In the book, Kaufmann draws upon and expands his work from a number of previous studies of the subject. The volume includes fifteen brief supplements that examine in more detail specific issues, such as the presence of Jews in the areas in which Luther lived, Antonius Margaritha's Der gantz jüdisch glaub, and the position of Melanchthon, Bucer, and Erasmus regarding the Jews. Each supplement contains additional discussion as well as reference to primary sources and historical studies. Kaufmann also includes an extensive and helpful bibliography and an index.

According to Kaufmann, concern with the Jews, theologically and historically, spanned Luther's earliest to his latest writings and reflected a central oppositional image for what Luther thought it meant to be a Christian. The battle against Jews - as against the papacy, devil, enthusiasts, and others - was tinged with an apocalyptic sensibility and was necessary as part of the formation of Christian identity. As such, Luther's discussion of Jews and Judaism was central to his theology. But this discussion was about and not with or directed towards Jews. Indeed, Luther would have had little opportunity to confront actual Jews in most of the places in which he lived. According to Kaufmann, therefore, Luther's occupation with Judaism was not related to a campaign of conversion, but to the battle of a Christian theology professor regarding evangelical truth and purity of the Church that would be vindicated against its enemies at the end of time.

Early on Luther characterized blood libel, ritual murder, and host desecration accusations against Jews as foolish works of the papists. At that time Luther evinced a more tolerant attitude toward the Jews, perhaps in part because of the accusations of Judaizing that he himself faced and criticism of certain of his own theological positions. For the early Luther the conversion of Jews was inseparable from the battle against the enemies of Christ in the form of the Roman Church. Luther's early work Daß Jesus Christus ein geborener Jude sei lacked some of the sharper criticism of Jews that would later highlight his writings. But that work needs to be considered within the context of Luther's anti-papal critique. Importantly, Kaufmann also compares Luther's earliest Jewish writings to other public and polemical pamphlets in the early Reformation, which shared similar foci, agendas, and theological concerns, including apocalyptic sensibilities, and were often presented in the form of a dialogue or disputation and focused on explication of the Old Testament.

A couple decades later, Luther would entertain the idea that there could be a kernel of truth in anti-Jewish accusations. Here Kaufmann places Luther's attitudes, and changes in his position, within the context of late medieval and early modern views on Jews and the impact of widely circulating illustrated broadsheets that served as part of the polemical war of the Reformation. Luther's later ideas, and his arguments with Judaism in particular, reflected broader developments and concerns of the aging Reformer. For Kaufmann, the diverging contexts and foci of Luther's later writings do not constitute a break in Luther's earlier tolerance and his quest for theological homogeneity, but their form and content were affected by the confessionalization and political context of the 1530s, as well as increasingly virulent polemics with those groups that Luther considered enemies of the Church. Luther's later writings had no particular missionary goals. Luther's Wider der Sabbather (1538), for example, was hardly in response to Sabbatarianism; rather, for Kaufmann, it was a rhetorical-polemical aid in the confrontation of debates about toleration of Jews in German cities and lands. Even the renowned Von den Juden und ihren Lügen is placed by Kaufmann in a broader context, as he compares both content and style of the writing with Sebastian Münster's Messias dialogue, a work not cited by Luther in Von den Juden und ihren Lügen (though cited by Luther elsewhere), but one that introduced a dialogic approach to the Old Testament and that included an extensive inventory of anti-Jewish accusations. Luther's later Jewish writings hold together, Kaufmann argues, in content as well as chronology. Their goal was to strengthen Lutheran faith and legitimate the Lutheran read of the Old Testament, particularly against Jewish and Judaizing interpretations. Luther's later Jewish writings, Kaufmann concludes, also need to be seen in the broader context of civic and territorial Church developments.

In a brief, but thoughtful fifth chapter, Kaufmann traces the reception history of Luther's Jewish writings from the middle of the sixteenth century into the period of National Socialism, paying particular attention to the complications of theological development in the process of confessionalization as well as the impact of actual political and economic concerns in Lutheran lands. (Following Luther's early or later writings, Jewry policies could be more or less favorable.) In the end, this masterful volume provides a quick, but deep reflection on Luther's Jewish writings that helps to make meaning of their foci and purpose by providing important context for broader developments to which Luther was responding and internal theological imperatives that Luther was himself confronting. Building on his previous and penetrating work, this volume is a significant and rich addition to the field of Luther studies, Reformation Studies, and early modern Jewish history.