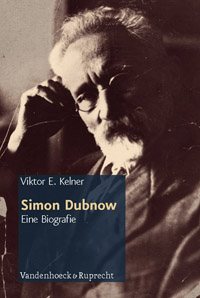 Simon Dubnow has rightfully been hailed as one of the most significant Jewish historians in modern times. Known for his social and political historiography, Dubnow was himself involved in wide-ranging scholarly and political activities and he penned an impressive array of books, articles, critical reviews, and correspondence. There has been a good deal of important scholarship on Dubnow, uncovering many of his personal and historiographical dimensions and placing him in various intellectual and social contexts. This volume adds significantly to that scholarship.

Viktor Kelner's biography takes a fresh look at Dubnow, with a heavy emphasis on Dubnow's development within a Russian context and by making extensive use of Dubnow's lesser known writings in the form of his letters, magazine editorials, reviews, journal articles, and memoirs-materials both published and mined from the archives. The book proceeds chronologically, tracing Dubnow and his development in different settings and locations. In so doing, Kelner is able to paint a very nuanced picture of Dubnow that reviews some of the most important and traditionally discussed themes in his historical writings, but that also reveals the influence of contemporary Jewish and general discussions and concerns on Dubnow's thinking. Along the way, Kelner sheds light on Dubnow, as well as those with whom he interacted, and he provides keen insights into broader intellectual and political developments in Russia in the late 19th and early 20th century.

Kelner provides a brief historical context before discussing Dubnow's family and early and formative years. Here, the use of memoirs perhaps colors the picture, as Dubnow's later musings often tell us more about the later Dubnow than the experiences of his childhood. To neutralize that problem, Kelner offers a very general, quite traditional, and perhaps only two-dimensional discussion of Jewish life-especially intellectual trends and education at the time. By contrast, with more material to utilize in the chapters on Dubnow's later life Kelner hits his stride and crafts very nuanced and compelling images of Dubnow and his engagement with his surroundings. In these pages Kelner masterfully dissects the many different publications of Dubnow and places them in a broader development that gives new and important insights into Dubnow and his later historical writing. These pages are themselves fascinating as they present the broad developments in Russian Jewish intellectual life among a circle of intriguing personalities. Kelner's discussion of Dubnow in Odessa is equally textured, as he presents important context and a rich discussion of the many intellectual circles and political movements there and Dubnow's engagement with them. It was at this time that Dubnow developed his thoughts on historical periodization, confronted the work of Heinrich Graetz, worked for the collection of historical source material, and encountered serious discussions about the question of nationalism (and associated issues of Zionism, autonomy, and assimilation). These issues, especially the last are also discussed within the context of revolution and pogrom (Kishniev) at the beginning of the twentieth century. Throughout, Kelner weaves in Dubnow's personal and family history. In the later chapters, Kelner places Dubnow's return to St. Petersburg into a thoughtful context, explicating Dubnow's involvement in Russian Jewish politics and his publishing efforts. He also traces Dubnow's movement-including his time in Petrograd, Berlin, and finally Riga, where he was eventually murdered by the Nazis in 1941. In each case, Kelner offers a multi-faceted portrait that examines key developments and activities in Dubnow's life. The book includes a timeline and an extensive bibliography of primary and secondary sources.

This is a remarkable book in many ways. Kelner offers insightful context and provides a consistent methodology, which makes constructive use of Dubnow's correspondence and publications beyond his large synthetic works. Many letters, which reveal Dubnow's thoughts and development, are provided in full and will be quite useful for scholars. And yet, these quotes, at times several pages in length, are rather indicative of both the strengths and weaknesses of the volume. In some places there is a good deal of synthesis; in many others there is very little. Often lengthy block quotes are left hanging for the reader to interpret, with little discussion or analysis. While Kelner addresses important and intriguing aspects of Dubnow's life and activities, such observations are sometimes, but not always made in the service of a larger narrative that seeks to understand the historiographical development of Dubnow. Indeed, the very brief epilogue points to some central developments in Dubnow's historical writing, but does not really take advantage of the impressive foundations that Kelner has laid throughout the book. At times there is almost encyclopedic information in the volume; at other times a good deal of repetition. In some ways the book is much too long; in other ways it could profitably be expanded. With these reservations in mind, however, this book represents decades of significant research that will be a valuable addition to the study of Dubnow and modern Jewish historiography. To that extent we owe gratitude to Kelner and his translator.