Thomas A. Schmitz / Nicolas Wiater (eds.): The Struggle for Identity 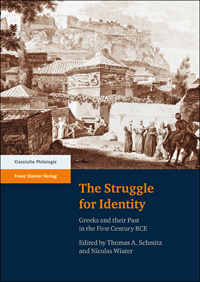 This pioneering collection of papers, based on a Bonn conference in October 2006, has a central Problematik behind its - somewhat charged - title: how far was the overarching, classicizing, 'Greek identity' which many scholars see as marking the cultural production of the Second Sophistic already detectable in the Hellenism of the first century BC? The sixteen cohesive contributions from this international meeting are all published in English, no doubt to maximise impact; despite the understandable misgivings which it might prompt in some quarters, this decision is merited by both the importance of the theme and the originality of the scholarship. The question set has not been programmatically explored before and offers a significant broadening of the usual focus of scholars of later 'Greek identity' on the developed Imperial age. It is explored mainly through the lens of the Greek literature of the period, with one archaeological paper (also the only one to exploit epigraphy). As well as Diodorus Siculus, Nicolaus of Damascus and Dionysius of Halicarnassus (two papers), contributors treat Mytilenean writers, grammatical scholarship, the Garland of Philip, and Chariton's novel Callirhoe. Albrecht Dihle and Glen Most offer broader reflections on, respectively, Greek classicism and the Augustan taste for classification, compilation and encyclopaedism (one which Most detects in not just 'literary' texts but also the Res gestae). Apart from the near-ubiquitous figure of Dionysius, there is relatively little overlap.

At least two notable themes emerge from these papers. Firstly, contributors stress, against the older scholarship, a certain autonomy on the part of the examined authors in their confrontation with the totalising world-order of first-century BC Rome. Dionysius' Antiquitates Romanae presents Roman power past and present as "conditional on genuinely Greek moral and political values", an image unlikely to have flattered Roman readers, as Nicolas Wiater points out (84), and one which rejects the Roman idea of a Greek heritage that was essentially cultural and in the past (89). Dennis Pausch denies the view that the bios Kaisaros of Nicolaus was Augustan propaganda, pointing out that it stands in the tradition of Greek agōgē-literature, not Roman (auto)biography, in its emphasis on Octavian's debt, not to ancestors, but to a Greek-style education. Tim Whitmarsh finds in Greek epigrams addressed to Roman patrons, not anti-imperialism (unsurprisingly), but a subtly rebarbative "salt" which, as he points out, a patron might even have expected of a poet (211). All this is to say, at the least, that Greek writers in this period were fully conscious of the cultural value of their paideia even as they placed it at the feet of Roman power.

Secondly, there is the presence (or absence) of a 'classical' Greek past. Thomas Schmitz's paper searches Diodorus for the timeless classicized Greece seen as so central to producing a 'Greek identity' in the world of the Second Sophistic. He finds traces (such as the special role of Athens and Sparta in the Persian Wars), but also jarring notes (not least the Sicilian emphasis), concluding that Diodoran classicism is "not very marked yet" and "curiously unpolished" (242). Even in the Atticist Dionysius, Athens as a "symbolic centre" is "not easy to pinpoint" (Schmitz at 237). This absence can be explained, following Wiater, as a function of the Dionysian view that the old Athens was reborn in first-century BC Rome, the leading Greek intellectual centre of its time (87).The Atticist controversy, both ancient (as an attack on koinē) and modern (as to whether Atticism originated in Greek or in Roman debates), does not - perhaps regrettably - receive significant re-examination here, although Dihle restates the view that the Ur-Atticism originated among Greek circles in late-Republican Rome (54). On the other hand, Beate Hintzen finds no evidence that the first-century BC Greek grammarians, judging from the fragments of admittedly lost works, sought to impose one Greek dialect as the norm, yet (131). Where a 'classical' Athens is unequivocally detected, the context is Roman, or rather Romanizing. Re-examining the phenomenon of classicizing architecture in Augustan Athens, Barbara Borg stresses that the impetus looks more Roman than Athenian (the known donors are Caesar, Augustus and Agrippa) and that the underlying idea was also Roman, not Greek: that is, Athens was now to be esteemed solely for her heritage (224; 234).

Apart from Borg's piece, such is the focus on Greek literature that the book perhaps makes less than it might of Roman influence. It is true that the editors in their Introduction concede the "crucial role the Romans played in Greek cultural self-fashioning" (44). Thomas Hidber is also surely right to emphasise the importance for first-century BC Hellenism of the capital itself, permitting "close interaction between Greek teachers and Roman students in an atmosphere that must have resembled a hothouse for literary and cultural creativity" (117, with a new list of Greek authors writing in later first-century BC Rome, 122-123); an example of this creativity is the conception of the Antiquitates Romanae which, as Matthew Fox sees (95), was "a radical project, rather than a conservative one". Hidber rightly stresses bilingualism (117-8) as an enabling factor in the gratitude which a Diodorus or a Dionysius could express to the intellectual environment, or specifically the paideia (Antiquitates Romanae 1.6.5), of the capital. Networked into these circles in the capital was another milieu and channel of acculturation, that of the Roman diaspora - the Rhōmaioi of countless Greek (and bilingual) inscriptions. They would merit closer scrutiny, not least because they included (as I have argued elsewhere) prominent public declaimers of Augustan times, notably Arellius Fuscus and L. Cestius Pius. Above all, there is the figure of Augustus himself. His role in the "Greek cultural self-fashioning" of his day is not directly addressed here, although it was probably considerable. Not only was 'Augustan culture', as mediated through imperial patronage in the capital, rife with a Hellenizing classicism (as Paul Zanker long ago showed), but Augustus and other members of his family signalled their admiration for a classicized Greece on repeated visits to the province of Achaia; not to mention the Dionysian attribution of the Atticist metabolē in Greek oratory to Rome's leaders. This emphasis on the cultural heritage of Greece was perhaps more than "an attempt of Roman intellectuals to reduce the significance of Greek achievements for Roman identity" (thus Wiater, 87). Augustus had Roman decadence (which some Roman moralists blamed on 'Greece') to reverse, symbols of unity with the provinces to forge, a stratum of Greek grandees (not all of them 'intellectuals', to be sure) to bring on side. Not only Nicolaus, but also Dionysius (cp. De Oratoribus Veteribus 3.1), set up Augustus and his regime as grounded in paideia and therefore capable of virtuous governance: here, perhaps, was the moral basis for something altogether new, a Greek perception of a Roman claim to cultural leadership over Greeks.

This excellent book has achieved a great deal in starting to map a complex topic. Everyone interested in the Hellenism of later antiquity will need to read it.