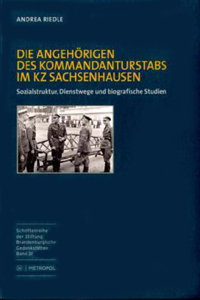 With this valuable study Andrea Riedle offers the first comprehensive scholarly analysis of the SS personnel who worked on the command staff of Sachsenhausen concentration camp. Sachsenhausen opened in the summer of 1936 and the following year Reichsführer SS Heinrich Himmler heralded it as a "concentration camp for the modern age". Whereas earlier concentration camps had been found and adapted to purpose, Sachsenhausen was the first of a series of geometrically-designed, purpose-built citadels of terror. The camp's proximity to the offices of Theodor Eicke's concentration camp inspectorate (IKL), also in Oranienburg, ensured that its Kommandantur soon became a prestigious hub of SS concentration camp personnel politics, rivalling and eventually displacing the Bavarian camp at Dachau in this regard by the early war years.

Around 1,000 SS men worked in the Sachsenhausen Kommandantur between 1936 and the German defeat in 1945. Of these Riedle focuses on a sample of 230, selected from a list of personnel identified by a judicial investigation based in Cologne in 1962. The enormous merit of her book lies in its rigorous and detailed quantitative analysis of their backgrounds and subsequent careers in the concentration camp network. 14% of the sample were from the "war generation" and, as in other concentration camps, it was men with wartime experience who tended to hold the senior, officer roles in the Kommandantur. 34% were from the "war youth generation" about whom so much stimulating scholarship has been written by historians affiliated to Ulrich Herbert's "Ideology and Dictatorship" project at Freiburg University in the 1990s. The majority (52%), however, were from the "post-war generation", born between 1910 and 1923, for whom the turbulent events of the Weimar Republic were experienced as a formative humiliation. Prior commitment to National Socialist politics is evidenced by the fact that half the sample of 230 had belonged either to the Hitler Youth, the SA, or the Allgemeine SS before the "seizure of power" in 1933. A remarkable 37.5% of the officers had served in the Freikorps, the post-war reactionary paramilitary groups raised to crush the Left and to defend Germany's denuded eastern borders. We are not, then, dealing with the "ordinary men" genre of perpetrator so often discussed in historiography.

Riedle's research into the sample's regional backgrounds also yields interesting findings. Bavarians are strongly overrepresented, which can be traced back to Nazism's roots in Munich and to the importance of the "Dachau School" in the training and brutalisation of the concentration camp SS. So too are Hannover and Oldenburg, reflecting the role of Esterwegen concentration camp in providing staff to Sachsenhausen. Berlin and Brandenburg, however, do not have the disproportionate presence one might expect from the camp's location. Among the officer corps, the underrepresentation is particularly pronounced, supporting the hypothesis that the SS sought to avoid deploying personnel in the camps who were too familiar with the locality - and, by extension, its prisoners too. Another important finding is that these men were not, contrary to Eicke's boasts, overwhelmingly selected from rural villages uncorrupted by the decadence of urban life: cross-referencing with the 1910 census, Riedle reveals that the proportion born in cities was statistically equal to the population at large. Whilst the majority of the sample's family backgrounds were lower-middle class, their own prior occupations as recorded by the SS documents a process of social decline amidst the economic misery of the early 1930s.

The educational level of the sample matches the broader German population of this time: around 77% of the men had attended only Volksschule. In striking contrast to the German army, however, the educational attainment of the officer corps was extremely low, with just 18.6% having the Abitur which was a precondition to promotion to officer rank there. The SS, then, and particularly its modestly-regarded concentration camp troops, offered a social and professional mobility to such men not available in the Wehrmacht. Another important demographic finding is that 60% of the sample were married before entering the Sachsenhausen Kommandantur and a further 30% married while posted there. Once married and at Unterführer (NCO) rank, couples could look forward to living with like-minded comrades on the vast SS Siedlung Sachsenhausen, constructed via prisoner labour in 1937 and 1938.

The second part of Riedle's book presents four biographies of Sachsenhausen NCOs who worked on the command staff between 1938 and 1942. She presents each as an exemplar of a particular "perpetrator group" under a taxonomy developed by Herbert Jäger in the 1980s: two types of "excess perpetrator" who displayed a violent zeal well beyond the ostensible requirements of the role, one bureaucratic "initiative perpetrator" committed to a technocratic exercise of terror, and one "follower of orders" lacking the ideological investment expected of SS men in the camps. Although Riedle makes a persuasive case for allocating each subject to their respective categories, the latter seem to this reviewer a little too static: SS personnel could change in their conduct over time, and depending on the type of prisoner they were dealing with. Nevertheless, the attempt to work some kind of broader applicability into the analysis is welcome and brings into focus the only significant criticism to be made of the book. Its focus is resolutely narrow and there is little attempt to present explanatory hypotheses for the collective habitus of the sample. Riedle is critical of Wolfgang Sofsky's sociology of the concentration camps without offering an alternative take on the contribution of social and situational factors to the daily miseries of Sachsenhausen, to its culture and institutional dynamics. This is reflective of an occasionally rather narrow and non-interdisciplinary bibliography. Although Harald Welzer's superb social psychological work on National Socialist perpetrators is mentioned once or twice, it is not addressed in any depth. The scholarship of historians such as Thomas Kühne on masculinity and comradeship in the Nazi milieu is ignored. Such omissions in no way irreparably damage the book but, given the excellence of Riedle's empirical and statistical work, the reluctance to engage with broader historiographical debates feels like something of a missed opportunity.