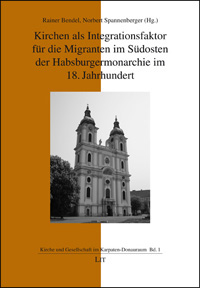 Historians generally put their own present's questions to the past. Europe's matters in the beginning of the 21st century concern the integration of cultures and nations. The new territorial paradigm focuses on regions reaching across boundaries rather than on countries in the sense of the last two hundred years. That means we are interested in the process of past integrations in regions that were developed as a very consequence of these integrations. It is also the need of our age to see various mental procedures as connecting powers that can shape reality. The issue of the present volume, which is the integration of immigrants in the south-eastern region of the Habsburg Monarchy in the 18th century, is represented in close connection with religion and church institutions.

For more than a decade now the Donauschwäbisches Zentralmuseum in Ulm seeks to reflect the history of the Danube Swabians (i.e. German farmers and workmen who settled down in the Habsburg Monarchy during the 18th and 19th centuries). In the genre of exhibition catalogues the museum also publishes books containing results of recent research on the topic. The volume under review, however, incorporates the papers of a conference organized by the museum in May 2007 under the title 'Religion als Integrationsfaktor für die Migration im Südosten der Habsburgermonarchie im 18. Jahrhundert.'

The conference as well as the volume are international and concern various fields of history. The nine Hungarian, one Serbian, one Slovakian and six German authors used German as common language; only two studies have been written in English. The editors divided the seventeen papers into four main subjects.

In the chapter 'Turkish Times, Change of Lordship and Inter-Confessional Conflicts' Szabolcs Varga compares two regions, namely 16th-17th-century South Transdanubia and Slavonia on the grounds of their confessionalization, catholic institutions and migration processes. Norbert Spannenberger examines the 18th-century inter-confessional relations of German settlers in South Transdanubia in connection with state settling policies. Zoltán Gőzsy discusses the process of reorganizing two Catholic Dioceses in the 18th century, P&#233cs and Veszprém, considering the multi-ethnicity and multi-confessionality of their inhabitants and the work of the lower clergy. Branko Brešlin delineates the Serbian migration to the north along the Danube into the Habsbug Monarchy at the end of the 17th century together with the changes in their religion and culture that followed it.

The second part, bearing the title 'Migration and Integration Processes,' contains seven studies. In his remarkable paper, András Forgó presents the clerical landowners' settling policy and its connections to recatholization on the basis of examples from North Transdanubia. Zoltán Csepregi detects the potential for conflict among immigrants belonging to the two main Protestant confessions in South Transdanubia. Peter Šoltes summarizes the migration and integration of Greek Catholic population in the northeastern parts of Hungary. Sándor Őze analyses the founding of towns in the Hungarian Plain after the liberation from Ottoman rule and allocates different types of resettling. The topic of Mathias Beer's distinguished work is the development of the common identity of the 'transmigrants' (Protestants from the Habsburg Hereditary Lands forced to migrate to Transylvania in the 18th century) which had become different from the identity of the original Protestant German inhabitants of the Grand Duchy. Karl-Peter Krauss examines causes of marriage law in the archdiocese of Kalocsa-B&#225cs in the early 19<span class="superscript">th</span> century and demonstrates the disciplining role of the Roman Catholic Church by its influence on marriage as a basic element of society. Finally, Gy&#246;rgy Kurucz depicts the already established Lutheran community of the Banat (the region which borders on the rivers Mures, Tisza and Danube) in the first half of the 19<span class="superscript">th</span> century, based on a visitation report of 1836.</p> <p>The last two sections each comprise, under their respective titles 'Cultural Landscapes and Remembrance Culture' and 'Research Results,' three studies, which are, in a way, of interdisciplinary nature, containing works of various fields of history (history of architecture, history of literature, historiography and biography). Klaus J. Loderer distinguishes certain types of Calvaries by their architecture that can be found in Hungary and tries to connect them to the German migration. Swantje Volkmann surveys the raising of Roman Catholic Church buildings under state control in the Banat region during the 18<span class="superscript">th</span> century. Tiborc Fazekas characterizes the literature written by Danube Swabian authors in the 19<span class="superscript">th</span> and 20<span class="superscript">th</span> century as self-reflections of an integrated ethnic group. In the paper of Krista Zach we find a slightly perfunctory report on the present state of church historical research on the Ottoman era in Hungary and the Balkans. The last two studies both present biographical data of prelates taking part in the restoration of the Roman Catholic Church in Hungary. The work of Tam&#225s T&#243th is about the two 18<span class="superscript">th</span>-century Archbishops of Kalocsa-B&#225cs of the same family, G&#225bor and &#193d&#225m Patachich, while Tam&#225s V&#233ghse&#337 features the efforts of Bishop &#193goston Benkovich on the union of Ruthenian and Rumanian orthodox inhabitants of Northeastern and Eastern Hungary and their integration to Catholic population in the second part of the 17<span class="superscript">th</span> century.</p> <p>Containing conference papers, this volume is necessarily divers in topics. While this fact unfortunately brought forward some diversity in quality and a slight negligence in technical editing, the international cooperation of young historians compensates these weaknesses. Despite the lack of a thoroughgoing summary of the results, the encounter of the local experts' easier access to data and mastery of national history with their western colleagues' acquaintance of modern points of view has still eventuated in notable findings. </p> <p>A new generation of Hungarian historians has begun to work on the field of early modern church history during the last decade. Due to the lack of appropriate basic research, they have to cope with elementary tasks, such as building databases or finding and publishing resources. It would be of great importance for them to be fully aware of modern tendencies of their profession, which is only possible via international scholarly relationships. Further cooperation will hopefully call forth even more profitable knowledge on the past as well as a better understanding of our present with special regard to the topic in question. Historians of various European regions need to integrate and work together in order to explore mechanisms of integration, thus helping to make it easier for contemporary society.</p> <p class="italic" style="text-align: right">Dániel Siptár</p> </div> </div> </div> <div id="page_footer"> <div class="ie6_font_size" id="separator"></div> <p>issn 1618-6168 / www.sehepunkte.de <img height="10" src="/images/sp10.jpg" width="10"> </p> </div> </div> </body> </html>