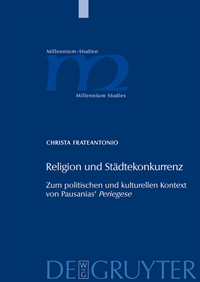 In Religion und Städtekonkurrenz Frateantonio argues for a new interpretation of Pausanias' Periegesis. The central premise of the study is that Pausanias covertly bestows praise and blame on the poleis of Greece and that religion is not treated only for its own sake but is used as a crucial medium for differentiating between the poleis of Greece and evaluating their character. The study falls in three parts that are headed by an introduction and concluded with a summary followed by an appendix, a bibliography, and a select index of names and terms.

The first part is a preliminary to the two main parts of the study. Here Frateantonio reviews a number of constant problems in the study of the Periegesis: the identity of the author, the genre of the work, the completeness and selectivity in the Periegesis, the heterogeneity of the books, compilation and stylistic variation. These are questions that, according to Frateantonio, have been neglected in more recent research on the Periegesis. The review of previous studies on these eternal questions of Pausanias studies sets the stage for the coming analysis. Readers are reminded of studies from predominantly German speaking universities produced around the last turn of the century; the studies of Kalkmann, Gurlitt, and Robert are prominent. [1] More recent research questions, such as that of pilgrimage and Greek "theatres of memory" as reflected in the Periegesis are also addressed. Frateantonio suggests that her reading of the Periegesis as covert praise and blame of the poleis of Greece, and that her taking the descriptions as deliberately allusive or even enigmatic may put these old questions into new perspective.

The main argument of part two is that rivalry between the Greek poleis is a central theme of the Periegesis and that, accordingly, the description is evaluative and aimed at establishing a hierarchy. According to Frateantonio, Pausanias constantly argues for an Athenian supremacy and a second rate position for Argives and Spartans. It is well known that the Greek poleis contended for prestige in archaic times as well as in the Roman Empire (then perhaps fuelled by the Panhellenion), and that religion and myth was one domain of rivalry. Further, this rivalry and local patriotism is reflected in the Periegesis. Some recent studies have shown the importance of local and/or oral sources for the Periegesis, which would entail that the account would become biased. [2] Selectivity and playing variant traditions against each other (either with or without comments on their trustworthiness and authenticity) are central compositional traits of the Periegesis. Frateantonio's assumption that Pausanias expected prior knowledge of history and traditions on the readers' part and that he thus strove to present known subjects in new and surprising ways is certainly correct. Pausanias' ranking is to be construed by taking together a number of discursive strands that run through the whole of the Periegesis.

In this chapter Frateantonio picks up only a few of these strands: she compares the descriptions of the throne of Apollon in Amyklai and that of Zeus in Olympia, discusses the question of who possesses the Palladion and the statue of Artemis of Tauris [3], catalogues the biographies of a few artists (Daidalos, Sakas, Polykleitos), and discusses Pausanias' treatment of a number of mystery cults. In addition, Frateantonio argues that Pausanias complements the internal rivalry between Greeks by setting the Greeks of the Greek mainland as a unity against other Greeks in Egypt, Asia Minor, and Sicily. Thereby these other Greeks, according to Frateantonio, are construed as second-rate. This is a problematic conclusion given that they are far from the centre of interest in the Periegesis and that they are discussed only in asides and not in their own right.

In the third part Frateantonio studies Pausanias' choice of a presumed model and the strategies he uses to authenticate the account and to give the evaluations and hierarchies authority. Reading the Periegesis as an enigmatic communication between a poeta doctus and a lector doctus, Frateantonio explores the tasks facing readers. They are to recognize Polemon of Troy as model and to appreciate Pausanias' emulative adaptation of his method of investigation and presentation by adopting a (hyper-)exegetic persona. In other words, they are to understand the evaluation implicit in Pausanias' setting variant traditions against each other and to know the source of the traditions alluded to. Readers are further assumed to recognize the interpretatively descriptive character of the account and to understand what the objects described denote, that is to say, to decipher the relation between the theoremata and logoi of the Periegesis. Explicit mention and implicit allusion to other text is argued to be decisive in the evaluative and hierarchizing exposition. Frateantonio is right to remind us that there are many associations in the Periegesis that are no longer perceptible because the intertexts are lost to us. But we must also be alive to the likelihood that the associations of modern readers of the Periegesis are not those of their ancient counterparts for the same reason - the fragmentarily preserved corpus of texts inevitably limits and directs our interpretation.

Frateantonio's analysis is problematic as she assumes rather than argues that Athens is depicted as having a special role in the Periegesis and that Argos and Sparta are consistently designated as second rate. In the description of Athens there are surprisingly few explicit words of praise, Frateantonio agrees, but maintains that this can be explained by the fact that Pausanias did not set out to write an apparent panegyric, and perhaps because Athens was presumed to hold an obviously superior rank (132). Passages in other books are said to bring out good qualities more explicitly, but she cites only a few examples. Further, Frateantonio mentions a few passages in the first book in which the Athenians appear in a less flattering light, but these she dismisses with short comments. However, both these and other passages in which the Athenians are presented behaving badly would have needed further comment. For example, it may be that the Athenians are pious and righteous (131f.), but they can try to bribe their competition and, when caught, try to escape just punishment (5.21.5-7, cf. 7.11.4-8). They are not averse to taking bribes (3.9.8), or to adjusting the historical record to their advantage (6.7.6f.). It may be that the Athenian expansionism prior to and during the Peloponnesian war is not brought to the fore (the events of this period are downplayed throughout the Periegesis), but Athenian aspiration to power, if not outright aggression, is suggested repeatedly already in the first book (1.5.4, 17.6, 23.3-4 with 9.19.4, 34.1, 35.2, and note that the Demosion sema houses the remains of many Athenians who have fallen on expeditions outside Attika, 29.4-15). The long biographies of the power struggles of Hellenistic monarchs may be read as a foil to Athenian virtue (132) but they also attest to the weakness and dependence of the Athenians. Etc. In short, Frateantonio leaves out many traits of Pausanias' portrait of Athens in the Periegesis - the Athenians are not consistently good and praiseworthy, nor are their bad traits always presented extenuatingly.

On a more general level the whole premise of the study is problematic. Certainly, the Greek poleis fought for primacy and prestige in Pausanias' times, and there are reflections of such rivalry in the Periegesis all of which Frateantonio brings out well. But from this it cannot be concluded necessarily that Pausanias set out to produce a piece for praise and blame. Apart from that, Religion und Städtekonkurrenz proposes an interesting comprehensive interpretation of a text that continues to intrigue readers.

From the foreword it appears that Religion und Städtekonkurrenz is the fruit of long study of Pausanias' Periegesis. Frateantonio did her research for the volume in 2000-2004 as part of the Sonderforschungsbereich "Erinnerungskulturen" at the Justus-Liebig University in Giessen; in 2007 she presented it as a Habilitationsschrift and finally printed it in 2009 after slight revision. Unfortunately the long lapse between the time of research and that of publication is reflected in the fact that those post-2004 titles that are cited are not quite integrated into the analysis. [4]

[4] There are some unfortunate bibliographic errata. P. 47 n. 32 refers to Bowie 1994, which does not occur in the bibliography. P. 191 n. 171 refers to Bucher 1919, which does not occur in the bibliography; there is a Bacher 1919. Are they the same?
In the bibliography itself the following were noted:
- The title of K. Hopwood appears to be confused (should it be "Cultural politics in Smyrna, city of the sophists"?). S.v. Hopwood the editors are cited as "Braund, Wilkins, 2000"; s.v. "Braund, David (Hrsg.)" should accordingly be corrected "Braund, David, Wilkins, John (Hrsg.)".
- Lafond 2001 is outside the alphabetical order.
- Domenico Musti is cited as the editor of the 1996 Hondation Hardt volume Pausanias historien; the editor is Jean Bingen.