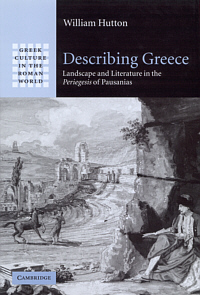 The focus of interest in studies of Pausanias' Periegesis Hellados has largely changed direction during the last two or three decades from a one-sided concern for the factual information provided in the work to a more balanced attention bestowed upon both the facts, the man behind the work, and its general tendencies. However, many studies still suffer from a too narrow focus in as far as they mostly concentrate on a selection of passages or some particular recurring themes.

With his book-length study, Hutton aims to remedy this deficiency particularly as regards the literary study of the Periegesis. Working from the - in this reviewer's view quite correct - assumption that the Periegesis is the result of its author's highly conscious literary efforts, and that the text reflects his understanding of the physical and cultural landscape of Greece, Hutton strives to analyse Pausanias' literary aims and methods and to show that an understanding of them is crucial for understanding his testimony on any subject.

The first three of the eight chapters of Hutton's study are introductory. In chapter 1 introduces the subject matter of his study, Pausanias, and the Periegesis, describing general characteristics of the work, such as its selective treatment of mainland Greece, beginning and end in medias res, antiquarian focus etc. Also the history of modern studies of the Periegesis is sketched. Hutton correctly identifies the 'Pausaniasfrage' and the battle fought at the end of the last century as influencing much of subsequent research, in as far as scholars still appear to feel obliged to prove Pausanias' reliability and trustworthiness. In Hutton's view, this lingering influence is accompanied by a tendency to view Pausanias as a "dependable dullard", viz. "the idea that Pausanias was an honest and reliable source was frequently coupled with a low estimation of his intelligence and sophistication" (22). To a certain degree this is a correct estimate, but largely owing to the fact that a large portion of studies of the Periegesis have been and still are focussed on the facts the work contains rather than on analysing it as a integral piece of literature. Throughout his study, Hutton reiterates his objections to the unnamed group of scholars who view Pausanias as a dependable dullard, in a bit too generalising manner.

Chapter 2 is an introduction to the time and society in which Pausanias lived. In this chapter Hutton discusses, among other things, travel , the widespread interest in and idealised view of Greek culture, education and literature which was largely detached from the realities of contemporary life in Greece, and the question of the relationship of Greek authors of the period to Rome, underlining the fact that Pausanias' attitude best can be described as multiple and, furthermore, promising an article on the much disputed passage 8.27.1. [1]

In the last of the introductory chapters Hutton's focus narrows down to the Periegesis itself. Hutton addresses the question of the scope of the Periegesis, i.e. he seeks to explain its geographical limits. Dismissing the usefulness of 1.26.4, he proposes that four specific criteria, which actually are merely a generalisation of characteristics of the areas that are included in the Periegesis, determine whether an area is included or not: (1) involvement in the Greek myth-historical traditions; (2) the quality and quantity of physical reminders of antiquity; (3) Pausanias' personal acquaintance with the area; (4) the ease with which the treatment of an area could be incorporated in the overall design of the work. Further, Hutton discusses the division of the work into the separate books, the degree in which they each are devoted to well-defined territories, and the order in which one book follows the next.

The next two chapters, "Marking territories" and "City descriptions", form a unit. In them Hutton studies Pausanias' organisation of the material both on a large and small scale. In chapter 4, he shows, convincingly, though a bit too prolixly, that, upon closer examination, Pausanias' deployment of the so-called radial plan is not as mechanical and monotonous as sometimes stated. The presentation of the material is varied in order to meet the needs of a territorial or artistic nature, and not optimised for guiding travellers. Among other things it is noted that topographical indications are intermittent, and a topographical sequence should not be expected unless explicitly stated in the text. This chapter closes with a short discussion on the few occasions Pausanias embarks and ventures to describe the landscape from a seaborne perspective. More often than not, this leads to mistakes of some sort. However, Hutton's analysis of 3.25.4 is not convincing: there is no reason, textual or otherwise, why one should expect topographical order in Pausanias' enumeration of the ports Achilleion and Psamathous, nor why his supposed reversal of the topographical order should be explained by his having embarked. [2] In chapter 5, it is shown that Pausanias' city descriptions occasionally follow a radial plan, but with numerous adaptations of the scheme in order to suit any site. [3] One of Hutton's main conclusions from chapters 4 and 5 is that while Pausanias gives accurate reports of the sights, various rhetorical and literary purposes in selecting and arranging the material override any ambition he might have had to provide a comprehensive guide to any site.

Chapter 6 is an exploration of the language and literary style of the Periegesis which refrains from any evaluative comments. By its style, which is neither colloquial or vernacular nor conformable to the contemporary stylistic trends, the Periegesis differs from the bulk of contemporary literature. Hutton's study makes clear that Pausanias' prose is an original creation, which clearly signals its own artificiality. By studying a few Atticistic surface phenomena such as the occurrence of double-tau versus double-sigma in a small selection of words or the use of 'gignomai' versus 'ginomai' in a handful of authors, Hutton establishes that Pausanias uses the non-Attic forms of these words more consistently, perhaps even more deliberately than any other author. Next, the well-known Herodotean influence on Pausanias is discussed, perhaps with unnecessary detail. There are excursuses into the Ionic dialect of Lucian's De Syria Dea and Plutarch's criticism of Herodotus' inaccuracies and bias in De Herodoti malignitate. Some of the admittedly interesting ambivalences inherent in the Lucianic mimesis of Herodotus that Hutton points out in this section, does not necessarily apply to works outside of the Lucianic corpus, as the authorial/narratorial voices of that corpus in themselves are highly polyvocal. The kind of undercutting of the narratorial authority and built-in irony that can be seen in Lucian's imitation of Herodotus is hard to find in the Periegesis, at least on the level of language - instead, Pausanias achieves this goal, if it indeed is a deliberate goal, by imitating the narratorial stance of Herodotus' Histories. [4] Hutton's discussion on the frequently contorted word order in the Periegesis is based on Strid's dissertation. [5]

Hutton proposes that Pausanias' apparently deliberate obstruction of understanding by the order of words may be explained at least partially by an influence from Hegesias of Magnesia on Sipylus, the bête noire of atticising critics singled out as the worst of the so-called Asianists. In other word, Hutton revives a nearly 200 years old hypothesis, which, as he himself admits, is currently out of favour, and has been so for some time. [6] If Hutton's hypothesis holds, then Pausanias' place in the history of Greek literature would be rather unique as the only surviving piece of Hegesias-imitation. Unfortunately, the arguments are weak and the so-called Hegesianic traits could equally well be given alternative explanations, such as imitation of Thucydides, which, moreover, could at least partially offer an explanation for the non-Attic word forms. Furthermore, Hutton's main inspiration for the hypothesis appears to be a desire to make every aspect of Pausanias and the Periegesis as unique as possible.

Questions of genre are addressed in chapter 7; the results are both positive and negative. Negative in the sense that Hutton, as everybody else, fails in assigning the Periegesis to one single genre - an apparently impossible task, unless it is to be assigned to the periegetical genre. [7] Positive in the sense that Hutton embraces the generic ambiguities and suggests that what we have is a unique and intentional mixture of various generic traditions, including the periegesis, periplous, history, and geography. That is, as Pausanias' subject matter was such that it could not be put into writing by using one single of the established literary traditions, he apparently did not hesitate to make an innovative mixture of the genres needed.

In the final chapter Hutton objects to the habit of viewing the Periegesis and its author as monoliths, which remain the same from beginning to end, in the light of the fact that Pausanias worked with the Periegesis during more than 10 years. History and religion in the Periegesis are discussed from a diachronic perspective. Hutton's discussion shows that there occurs a slight change of interest and focus as regards the historical material, but that the religious outlook does not appear to undergo any radical change despite the famous professed conversion in 8.8.3.

Hutton's monograph on the Periegesis is obviously the result of prolonged relations with Pausanias, as it originates in a dissertation for the University of Texas that was focussed on the questions treated in chapters 3-5 of the present book. [8] Its layout is pleasant with numerous illustrations. However, chapter 6 would have benefited from a revision, and the whole book would have profited from having been proof-read once more; particularly in the Greek there are some mistakes, occasionally references to the Periegesis are missing, and some of the references included are wrong.

Together with Habicht's by now more than 20 years old study, Hutton's monograph will undoubtedly become one of the works of introduction to Pausanias' Periegesis. [9] Whereas Habicht's study of the Periegesis largely is focussed on its reliability as regards the factual reports, Hutton's is more concerned with its literary aspects and the problems of interpretation on a non-factual level facing any scholar who studies this highly elusive work on Greece from the second century AD, which has its raison d'être in the contemporary idealisation of a bygone Greece at the same time as it is a corrective of this very same idealisation. [10]

[8] W.E. Hutton: The Topographical Methods of Pausanias. Diss. The University of Texas at Austin 1995.