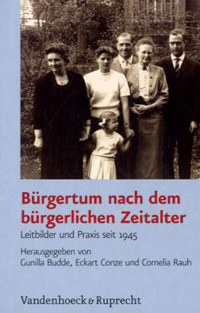 The various strands of research into the history of the Bürgertum, for all their many differences, have perceived the middle decades of the nineteenth century as the high point of that group's influence on central European culture, society and politics. This condition, the argument continues, was decisively and terminally transformed by the socioeconomic and military-political upheavals of the late nineteenth and first half of the twentieth century, so that at some point between the Kaiserliche Botschaft and the Battle of Stalingrad the era of the Bürgertum came to an end. What remained, following 1945, were survivals, localized remnants of a past epoch. The editors of the volume under consideration endorse this chronology, and it is certainly the impression given by the book's charming cover photograph, showing three generations of a bourgeois family, standing in front of a villa, during an autumn day in the 1950s. Most of the contributors to the volume, though, are not entirely in agreement with this periodization. While a few of the book's essays adopt the idea of a post-bürgerlich second half of the twentieth century, some perceive post-1945 developments as part of a longer-term reformulation and reshaping of the Bürgertum, begun at times ranging from the late Wilhelmine Era to the Third Reich. Others understand the years after the Second World War as a period of new departures, revitalizing, or perhaps even creating for the first time, bürgerlich values and political orientations in Central Europe.

The idea of bürgerlich survivals in a post-bürgerlich era is most evident in two essays on leisure and free-time activities. Till Manning's piece on tourism documents the decline of Bildung-oriented appreciation of foreign countries, in favor of mass, fun-in-the-sun travel. If tourism changed greatly, Sven Olivier Müller shows the continuity of the classical music scene in the post-1945 Federal Republic - a reaffirmation of the nineteenth century repertoire and a rejection of modern music. At first glance, Marie-Christine Pothoff's essay on the post-1945 Rotary and Lions Clubs fits into the category of continuity and survivals: voluntary associations, with a very bourgeois membership, devoted to charitable activities, self-cultivation and intellectual improvement, a classic nineteenth century group in the second half of the twentieth century. Of course, unlike their predecessors, these associations were part of an international organization, centered in the United States - a country that was eminently capitalist, and perhaps quite bourgeois, but not very bürgerlich.

An important reason for the lack of essays on post-1945 survivals was the topics missing from consideration. The book contains no essay on the Beamten, a group central to most histories of the Bürgertum - and a group whose wohlerworbene Rechte were explicitly guaranteed by the Grundgesetz. More generally, the Bildungsbürgertum, a group exemplifying continuities with past eras, at least during the 1950s (in the Federal Republic certainly, but in the GDR as well) does not make a very large appearance in the book.

The idea of the post-1945 era as part of a period of ongoing change, dating from earlier in the twentieth century, is significant for the essays on the class of corporate managers, an ever larger and more important group in the years following the Second World War. Adelheid von Saldern's essay investigates the leading institute of managerial training, the Harzburger Akademie. Founded by the former SS Oberführer Reinhard Höhn, and largely staffed by fellow ex-Nazis, the institution propounded Nazi-era managerial conceptions, such as Leistung and Menschenführung in a form suitable for the Federal Republic. This very accomplished piece stands rather in contrast to Werner Plumpe's and Christian Reuber's essay on recruitment and promotion of corporate managers. The authors argue that there cannot have been any discrimination against job applicants from non-bürgerlich backgrounds, because corporations, as profit-making enterprises, must necessarily hire and promote only the most capable and competent individuals. The authors' faith in the rationality of corporate enterprise is touching, but does not seem to correspond to the empirical reality of the business world, as recent events in the financial sector have demonstrated.

Another variation on the theme of long-term transformation comes from Christine Krüger's piece on the history of programs for young people's social engagement. Initial efforts, after 1945, were heavily influenced by the Reichsarbeitsdienst and had as a major goal getting working-class youth off the street. From the late 1950s onwards, these programs were increasingly oriented toward young people from bourgeois families and became part of a bourgeois career path. The author observes that most of these programs were very small scale, and closely associated with the Protestant Church. Unfortunately, she does not consider the transformation of such niche activities into a mass phenomenon in the last quarter of the twentieth century, impelled by the growth of conscientious objection to military conscription.

The idea of the post-1945 era as a new beginning is particularly apparent in the essays on political activity, which emphasize the Bürger as citoyen rather than as bourgeois. The most pronounced example is Dieter Goosewinkel's argument that the concept of "bürgerliche Gesellschaft," links, inappropriately, a social formation with a political ideal. Even the more recent term "Zivilgesellschaft" (the history of the varied translations of the English "civil society" into German across the two centuries from 1780 to 1980 might be worth an essay in itself) is not quite enough for him; he prefers Zivilität, defined as "Primat des Rechts; Anerkennung des anderen und Garantie der Menschenwürde; Abbau und Delegitimierung der Gewalt." These are all admirable ideas, but proposing, as Goosewinkel does, to rewrite German history in terms of the implementation of such concepts, seems to be a teleological enterprise, working from political conceptions of late twentieth century enlightened intellectuals. Holger Nehring, in his essay on "Bürgerlichkeit als Protest," tries to connect citoyen and bourgeois, arguing that the anti-nuclear war protest movements of the early 1960s emphasized the importance of security and the safety of families, two important aspects of the bourgeois society of the 1950s Federal Republic. The anti-bürgerlich tone of the student movement of the later 1960s in this account represented a very considerable transformation. Nehring's efforts to continue his formulations into the 1970s and 1980s are less successful, but his approach seems more promising than those of the other authors discussing post-1945 political conceptions of Bürgerlichkeit.

The book's essays on education and cultural values and practices also emphasize post-1945 new departures. Two very solid essays on education, by Peter Lundgreen and Daniela Münkel, show that the expansion of opportunities in secondary and higher education after the Second World War did not so much result in a greater participation by social groups previously excluded as it did the expansion in the proportion of members of - generally bürgerlich - social groups who had previously been the chief constituency for advanced education. The changes they describe reinforced the position of the Bürgertum rather than undermining it. Miriam Gebhardt and Lu Seegers both discuss new departures in family values, offering different periodizations. Gebhardt's essay, on child-rearing ideals, suggests that the transition from an approach focusing on the disciplining of infants and young children, to one emphasizing their self-expression occurred quite late, in the 1970s. The idea of the 1970s rather than the precursor decade as a the decisive era for transformations in family life has been employed in the history of the US, the UK or France, and might well fit into developments of the Federal Republic as well.

Lu Seegers's essay on the portrayal of celebrities in TV magazines as a reflection of the transformation of bürgerlich values about women and family emphasizes the 1960s. In that decade, such magazines had increasingly positive pieces about married women working outside the home, or unmarried women bearing and raising children; from the mid-1970s onward, they articulated an increasing backlash against feminist demands for women's emancipation. The idea of finding the transformation of family and gender values in Hörzu rather than Kommune 1 is very interesting, but it is quite unclear what was bürgerlich about these magazines or their readers. By contrast, Gebhardt's piece is not just based on advice manuals, but uses as sources child-rearing diaries written by women in very bürgerlich families.

The volume as a whole suggests two ways that research into the Bürgertum in post-1945 central Europe might proceed. One is to bring the work into closer conjunction with other lines of research into the history of the period: the debate on the 1950s as an era of restoration or quiet modernization, the idea of the "Americanization" or "westernization" of the society of the Federal Republic, the nature, character and evolution of the coming to terms with the Nazi past, or the characterization of the social and political upheavals of the late 1960s and 1970s - usually described, in a not entirely accurate shorthand, as "1968." The essays in this volume all seem relevant to these developments; the most successful of the essays take them explicitly into account.

Another point might be a consideration of the late twentieth century intellectual background to the renewed interest into the Bürgertum. There were very different approaches, articulated in the stock phrases "bürgerliche Gesellschaft" on the one hand, and "neue Bürgerlichkeit," on the other. The political connotations and social implications of the two conceptions of Bürgertum and Bürgerlichkeit in the phrases point in diverging directions, a divergence quite apparent in the essays in this book.