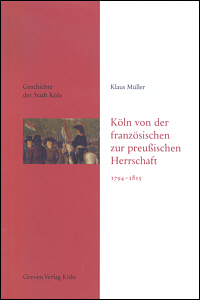 This book, one of the two initial volumes of a planned thirteen-volume history of Köln from its Roman beginnings to the present, makes a remarkable tactile impression. Firmly bound in hard covers, with sewn signatures, printed in an easily readable font on heavy, glossy paper, accompanied by 218 illustrations, many in full color (and all at a relatively reasonable price), the work bears witness to its publishers' extensive experience with art- and photo-books. The physical quality of the volume might raise doubts about its scholarly worth. Such doubts would be most unjustified. Klaus Müller has written an excellent comprehensive history of the city in an era of political upheaval, fully incorporating the existing literature on the topic (a fair portion of which he has authored), and making extensive use of primary sources, including archival materials in Köln, Düsseldorf, Paris and Vincennes. There are instances when a different perspective on the topic might have been helpful, and more explicitly comparative conclusions would have added to the value of the account, but in general this book is a valuable resource, for the history of Köln and, more broadly, of central Europe in the age of the French Revolution.

Divided into twelve topical chapters, the book falls into four broader sections. The first section comprises three narrative chapters on politics in the city from its conquest by the French in 1794, through its occupation by the anti-Napoleonic Allies in 1814-15. Müller downplays the revolutionary nature of French revolutionary rule. The occupation authorities left the city's old regime institutions and rulers largely intact, and had, at best, modest sympathies for the revolutionary agitation of the city's Jacobins, who were unable to gain widespread support by their own efforts. It was only with the incorporation of the Rhineland into the French Republic at the end of the 1790s that the institutions of the old regime freie Reichsstadt were abolished and a new system of government introduced. Yet the new government was largely staffed by members of the previous elite, such as the maire, Johann von Wittgenstein, a pre-revolutionary Bürgermeister, or the ubiquitous Ferdinand Franz Wallraf, who attempted to use the republican and Napoleonic authorities to implement his many cultural and educational plans - generally without much success.

Müller presents these individuals as collaborating with the French in order to advance the interests of their native city, rather than out of enthusiasm for the new political order. More generally, he notes the reserve with which Köln's inhabitants greeted the French regime. There was little open opposition, but the notables had to be pressured into forming an honor guard for Napoleon's visits, and the increasing burden of taxes and military service, as well as the customs officials' rigorous campaign against smuggling, part of Napoleon's economic warfare against England, tended to alienate the mass of the population. The Allies were warmly greeted on their entrance into the city in 1814, but during the Hundred Days shouts of "Vive l'empereur" could be heard in front of the headquarters of the Prussian Stadtkommandant.

The second section deals with administration. A chapter on the running of the municipality emphasizes its subordination to the national government, and the constant fiscal pressures on the municipal budget. A larger, more bureaucratized and more intrusive administration replaced the limited and inefficient government of the Reichsstadt. This new version of public administration had some successes, such as banishing beggars from the city's streets, but in other respects, such as improving public health, had little to show for its efforts. By contrast, Müller suggests that the court system and the Napoleonic Code were both effective and popular, although his discussion of the new legal regime remains at an abstract level and we do not see either the civil or the criminal courts in action.

In the third section, on economy and society, the author judges rather skeptically the economic effects of the age of French rule. In spite of legal changes, such as the abolition of the guilds and introduction of freedom of occupation, economic innovations were not much in evidence. The disruptions in the city's commerce, brought about by warfare, the creation of a customs barrier along the Rhine, and Napoleon's continental system, harmed the municipal economy. Some not too successful initial attempts at large-scale manufacturing were inadequate compensation. In this respect, Köln's economic situation in the era of French rule differed from that of Aachen and Krefeld, with their well-developed and prosperous manufacturing sectors.

Müller observes a similar lack of change in social structure. Demographic behavior remained in an old regime pattern; occupations changed little. Even the secularization of church property does not seem to have had major effects on the distribution of wealth. He does note the one important change introduced by the French, the granting of legal equality to Protestants and Jews. The growth of these two communities, whose members tended to be more affluent than the city's Catholics, led to the emergence of an inter-confessional group of notables, unlike the ständisch elites of the old regime.

The last section deals with religion and culture. The chapter on the church and religion offers a detailed account of the reorganization of ecclesiastical administration and the secularization of church property. By contrast, the changes in religious beliefs and practices remain rather under-illuminated, regrettably so, in view of the fierce Catholic loyalties of most of Köln's inhabitants and the central role religion played in the self-identity and politics of the city. In regard to cultural and intellectual life, French rule meant an end to Köln's old regime university, and no adequate replacement for it emerged. Literacy increased modestly, rather unusual for Napoleonic Europe, suggesting an improvement in elementary education, although coming from an unusually mediocre situation in the old regime. In a lengthy chapter, Müller offers a detailed account of high culture in Köln, mostly showing that it was at a low level. One trend worth noting was the way that voluntary associations replaced the church as the bearers of musical life.

At times, I wished that the author had made some more explicit general observations than he did. The portrayal of continuity and changes of political alignments in the city through two decades was quite unclear. Müller hints on several occasions that a contrast between an enlightened and a Catholic-clerical group of notables dominated municipal politics across the different regimes to which the city was subject, but does not develop the point explicitly. The contrast between the French military occupiers, who were reluctant at first to change existing municipal institutions, and the Prussians, who proceeded more aggressively, deserves greater consideration. Finally, it might have been helpful to compare the experiences of Köln with those of other major urban centers of the German-speaking world in the era of the French Revolution. Yet, if not explicitly developing these points, the author provides plenty of material for his readers to do so, thus giving his admirable account of the destiny of Köln a broader significance.