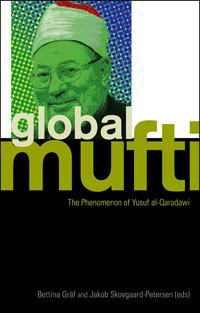 Is the mufti Yusuf al-Qaradawi a more skillfull Islamist, an advocate of moderation or a global creator of most dangerous concepts in the politicization and jihadization of Islam?

In search of answers, academics met on a 2006 conference in Cairo. This book is the result: "not intended to be a defence of, or an attack on" (11) this intellectual of Islamism. Eight chapters describe the scholar. Born in 1926 in the Egyptian village Safat Turab, he attended al-Azhar University two decades later. This was a risky era for Muslim Brothers like him. After a 1952 coup, Egyptian officers forbade parties and the Muslim Brothers. Then the Brothers tried to kill Abd an-Nasir. With others, al-Qaradawi wound up in jail. Released in 1956, he worked as teacher in Cairo. In 1961 he moved to Qatar. This land became his home. In Doha he led university institutes. A decade later he hosted a TV serial about fatwas. He became famous by a similar show, Life and Sharia, at al-Jazira since 1996, by web fatwas on global terror and as angry critic in a Danish cartoon affair.

Before making three points, I take a look at the contents. The editors Bettina Gräf of Berlin and Jakob Skovgaard-Peterson of Cairo introduce us to the Sunni mufti's life as scholar, activist and Islamist enabler. Gräf previews the state of research. In her preface Gudrun Krämer of Berlin added questions, among them: how does his presence in the media and transnational webs translate into religious authority? What does his idea of Islam of the middle ground, wasatiyya, mean for women and non-Muslims if we compare with definitions of the extremes? Why does his moderation not imply such foreign-policy issues like Israel? Sure, he is more practical, less moderate: his goal is to globalize Islamism.

Skovgaard-Peterson enlightens al-Qaradawi and al-Azhar concluding that his project is a new Ulamaism, an ideology that reestablishes ulama scholars as source and rulers of the umma or guardians of change. Husam Tamam of Cairo describes the mufti's ties to the Muslim Brotherhood. He became a member in 1942. Tamam names Islamic institutions where the mufti is a member like the At-Taqwa Bank (67). Here, I add, the U.N. Security Council blacklisted this bank for links to Islamist terror circles of al-Qaida and Hamas until mid-2010. Incorporated in 1988, co-founders were also Yusuf Nada of Munich and François Genoud of Geneva. Both worked closely with Jerusalem's grand mufti Amin al-Husaini. Genoud did it 1933 to 1974 also as key manager in global Nazi-Islamist webs.

However, Tamam mentions that al-Qaradawi declined twice the position of the Muslim Brother's General Guide, in 1976 and 2002 (after the fifth Guide, Mustafa Mashur, died).

Al-Qaradawi said, explains Motaz al-Khateeb of Doha, that he filled a vacuum due to "the dominance of the practical and jihadi side over the academic and intellectual one." Among his teachers were Hasan al-Banna and Sayyid Qutb, both also swayed by Berlin's Islam policy and by Amin al-Husaini. Contrary to Qutb, who waged jihad against all, al-Qaradawi's jihad was rather defensive than aggressive for wasatiyya, claims al-Khateeb. Other parts of the book say the opposite: he is a classical Islamist (in his memoirs he uses as self-definition al-Islami too) dividing the world often in Muslims and their enemies.

The mufti's European politics discuss Alexandre Caeiro of Leiden and Mahmoud al-Saify of Nijmengen, specifically his views on terrorism. He attempts, underline the authors, to integrate Muslims while resisting their assimilation. Al-Qaradawi encourages the political participation, interest-bearing mortgages to buy a house, interfaith dialogue but he forbids interfaith marriage. Liberal and secular Muslims criticize him for his stand on apostasy, women and violence with his simplistic thinking. Though he condemned the attacks on America in 2001, he supports suicide missions against Israel as acts of "legitimate terror." This earned him names like shaik of death or mufti of terrorism. It becomes clear that al-Qaradawi, chairman of the European fatwa council since 1997, includes Europe into the shar'ia zone. He plays, say the authors, a structuring though contested role in Euro-Islam.

Ehab Galal of Copenhagen gives an overview on the mufti in the Islamic TV, in Islamist discourse and opinion formation. Barbara Freyer Stowasser of Washington DC deals with his New Islamism toward women. He legalized women as suicide bombers in Israel. That she calls his appalling rule not only gender equivalence but true gender equality without a further comment, might mislead some readers. Finally, Gräf considers wasatiyya in the mufti's work. Al-Qaradwi argues that Islamic movements are assigned to the right-wing spectrum. But the heart of every Muslim should beat on the left for his efforts that are directed toward dignity and social justice. True, this idea grew with a rising Socialist tide in the Middle East after 1900. Yet it still opens doors for cooperation with the left wing.

Now a word on three points. This book is a much needed and fine in-depth study about an Islamist propagandist. It shows how to do it without overly engaging in polemics. On the other hand, one can find some parts all too sympathetic to this mufti. It would not be the first time that an author is fascinated by his subject. Still, keeping the critical distance is so important not loosing the mufti's key goals of Islamism out of sight such as spreading aggressive jihad and kinds of Islam that are not compatible with democracy. If this gains the upper hand in Europe, even admiring scholars would fast be silenced. After all, 2,500 Muslims named him in 2004 shaik of death for providing the Islamist cover of terrorism.

Secondly, contrary to all who aspire to do research on the mufti without reading him in Arabic, his only tongue, this book keeps a standard. The more decisive are translations. Two examples. Shumuliyya is always used as comprehensive (5, 66, 90, 100). But there are many Arabic texts on the Soviets with another possibility of shumuli: totalitarian. The next example: wasati and its derivations can also point to hallun wasatun as compromise. Al-Qaradawi puts himself in the "practical middle." For radical projects of Islamists lead over decades into bloody dead ends. Al-Husaini missed fully the concept of compromise.

The last point. Neither al-Husaini nor al-Qaradawi mention each other in memoirs. Why? This is my question to the mufti. Al-Husaini emerged as the first global grand mufti. Both shared main ideas, teachers, places, Islamism, Muslim Brothers, global reach, allies and foes until 1974. The first became the model mastermind, the other one his chief adaptor.