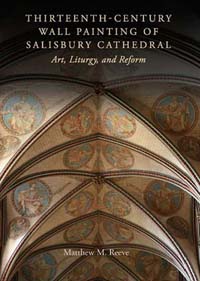 Salisbury Cathedral is one of the most iconic English cathedrals, famous to art lovers through the many views of it painted and sketched by John Constable in the early nineteenth century. Yet at the time when Constable was immortalising the cathedral's exterior, a 'modernisation' campaign had already taken place inside that Matthew Reeve emphatically describes as 'infamous' in his study of the lost vault paintings that once adorned the eastern arm - i.e. the liturgical heart - of the church. [1]

As Reeve explains (42), Salisbury Cathedral had already been admired by Sir Christopher Wren for its 'stately and rich plainness' in the seventeenth century, but any modern appreciation of the building's 'apparent minimalism' fails to take into account its much more colourful medieval appearance. In 1789, despite protests from Fellows of the Society of Antiquaries - most notably Richard Gough - and members of the public, James Wyatt was commissioned to modernise the interior of the cathedral in line with the neo-classicist aesthetics of his own time. His 'improvements' included the removal of the thirteenth-century choir screen, tomb monuments, and the Beauchamp and Hungerford chantry chapels; the destruction of much of the stained glass; and the whitewashing of the cathedral vaults to obliterate what one of Wyatt's admirers termed 'wretched daubings' - paintings whose thirteenth-century date was doubted by some. Fortunately Gough recognised that the paintings were an integral part of the design of Salisbury Cathedral from the time when it was built to replace Old Sarum Cathedral, and in 1789 he commissioned the draughtsman Jacob Schnebbelie to record the paintings before they were whitewashed. We thus still have Schnebbelie's sketches and finished drawings, Gough's own on-site notes, letters between the two, as well as records of the Victorian restoration in the 1870s under George Gilbert Scott when most of the vaults were repainted by the London firm of Clayton and Bell in an attempt to recreate the medieval polychromy, and Reeve carefully weighs the reliability of these sources, illustrating most of the recorded drawings.

As Reeve shows, the loss of the vault paintings in the eastern arm of Salisbury Cathedral was much more than the obliteration of medieval polychromy suffered by so many other churches. There is a growing appreciation among scholars of the importance of colour in medieval art, which was once also an integral feature of tomb monuments now mostly left without any sign of their former finish. However, Salisbury Cathedral is unique because of the unified nature of its overall design, due to its having been conceived and built in a period of just thirty-eight years (1220-c.1258), the eastern arm being finished by the mid 1230s (34). Reeve argues that the whole building - architectural structure, stained glass and vault paintings - was conceived as a Gesamtkunstwerk, an idea that had already occurred to Gough (59). It was thus not the 'pure' building admired by some for its supposedly Cistercian austerity in line with Saint Bernard's religious interiority, but a church in which polychromy and narrative were intended to serve a clear liturgical purpose.

The reference to wall instead of vault painting in the title of the book might seem confusing. However, the book also includes a brief discussion of the ornamental foliate scrollwork on the arcade and triforium spandrels framing the painted cycle above (since overpainted by Clayton and Bell) and of the contemporary painted reredos from the chapel of Saint Martin in the north-east transept, of which a tracing was made in 1847, and which may point at the former existence of a much larger collection of painted altars to have formed part of the original polychromy (53-56). Yet the real focus is on the vault paintings, and on its connection to liturgy and reform, which are important components in Reeve's argument. In five chapters he discusses the liturgical and spiritual reform at Salisbury; the architectural context of the building; the history, style and possible authorship of the paintings and the antiquarian evidence; the relationship between the liturgical and 'performative' space in the eastern arm and the painted imagery above; and the meanings of the cycle's programme, which Reeve claims 'was designed to provide a pictorial narrative of Salvation History' (8). The cycle originally consisted of twenty-four prophets including the Erythrean Sibyl (choir), angels (eastern transept), the Labours of the Months (presbytery, now out of sequence), and Christ in Majesty with the apostles and evangelists (eastern crossing); these medallions were moreover originally framed by ornamental painting against a background of illusionistic ashlar masonry joints. Reeve also proposes an early date for the cycle in the 1230s and '40s, rather than around 1270 as some believe; his argument that the imitation masonry joints were overpainted with the narrative cycle while the scaffolding was still in place, rather than in two separate campaigns, seems logical (68). Whether the paintings are indeed the early work of the so-called Sarum Master is more difficult to prove on stylistic grounds, as Reeve proposes, especially as there is no firm evidence about the workshop or output of this illuminator, who was active in Salisbury in the slightly later period of c. 1245-55/60 (72-75). More analysis of the iconography of the cycle's programme would have been welcome, but contextualisation is clearly the author's main goal.

Reeve argues his case with care and his scholarship is evident in the many sources referred to in footnotes and in the extensive bibliography, which also lists manuscripts cited (144-68). Almost de rigueur is a reference to Lawrence Duggan's 1989 article 'Was Art Really the "Book of the Illiterate"?', although Reeve might also have cited Duggan's later reflections on this article. [2] Very useful are the two Appendices (135-43), the first of which offers a transcription and reconstruction of the texts within the paintings, and the second a transcription of Gough's unpublished description of the vault paintings (Lambeth Palace MS 2215). The book also contains an index, although this is both incomplete and inconsistent in places; for example, Caesarius of Heisterbach is listed under H as 'Heisterbach, Cesarius [sic]' while John Beleth is found under J. Despite the high degree of scholarship, some inaccuracies have also crept into the main text. Willibald Sauerländer's surname lacks the accent throughout, angels carry 'censors' (52), the Evangelist symbols are incorrectly pluralised as tetramorphs (115), and one illustration is credited to the 'Corpus Vitrearum Medi Aevii' (plate 28). The citation of Latin texts in footnotes accompanying translated excerpts is admirable, although the translation of the Erythrean Sibyl's scroll E celo rex adueniet [per secula futurus] (115) as "the King will come from heaven [in the age which is about to be]" is not quite correct.

Reeve's approach is holistic and the present volume has much to offer medievalists from a wide range of disciplines, as it addresses liturgical practice, church architecture, painting, sculpture, as well as post-medieval aesthetics and antiquarianism. Reeve makes a convincing case for the concept of Salisbury Cathedral as a rare unified combination of architecture and art designed in tandem to serve a liturgical purpose, thereby showing that it is indeed deplorable that we have lost so much of the cathedral's original character. The Victorian 'restoration', however well intended, is evidently no match for the quality of the thirteenth-century paintings. One must share the hope expressed by Reeve (129) that the remainder of the cycle which still survives beneath the whitewash in the eastern transepts will one day be revealed again, thereby allowing us a better idea of Salisbury Cathedral as what Reeve terms in his conclusion a not yet fully understood 'utopian project' of the thirteenth century (133).

[1] The book is a continuation of an article that Reeve previously published with Olivia Turner: Mapping Space, Mapping Time. The Thirteenth-Century Vault Paintings at Salisbury Cathedral, in: The Antiquaries Journal 85 (2005), 57-102.