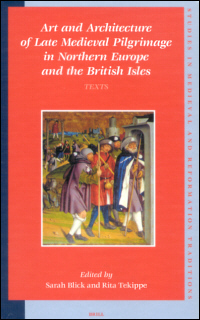 This massive study on medieval pilgrimage contains twenty-seven essays with an introduction (vol. 1) and 348 b/w illustrations (vol. 2). Before outlining the articles it contains, the introduction sets out the scope and focus of the book, while asking such questions as whether there was ever such a thing as "pilgrimage art" ("Basically, any form of visual culture that was apparently intended to enhance, transmit, or direct a pilgrim's experience at a particular sacred site allows us to identify it thusly.", xiv). All essays contain copious footnotes and at the end of vol. 1 there is an extensive bibliography, an index of names and places as well as a subject index. Notes on the contributors are unfortunately absent.

The essays are thematically divided into seven parts, some of which have rather unwieldy titles. Part I entitled "The pilgrim's journey: vision and reality" contains an article on pilgrims' dress, two essays on the idea of spiritual pilgrimage in Memling's paintings and on his St Ursula shrine, and one comparing the narrative sculpture on the flamboyant portal of the Saint-Esprit Chapel at Rue (Picardy) to Early Netherlandish painting. The three essays in part II on "Housing for saints" focus on shrines and churches, whilst part III on "Experience and iconography at pilgrimage centers: discerning meaning" features three essays on the interpretation of Gislebertus's "Journey to Emmaus" capital at Autun; on the iconographical presentation of Saints Firmin and Honoré at Amiens; and on the Trinity Chapel windows at Canterbury Cathedral. The four essays in part IV are in different ways related to Jerusalem, viz. Daniel Connolly's essay on the labyrinth pavement at Chartres (which serves as a useful companion to James Bugslag's impressive survey of the history and importance of Chartres as a pilgrimage destination in part II); a study of the Romanesque church of Neuvy-Saint-Sépulchre (Berry); a comparison of different types of True Cross reliquaries; and an analysis of depictions of the sepulcrum Domini in French twelfth-century art.

Part V on "Pilgrim souvenirs: meaning and function" probably works best, especially with the juxtaposition of two essays by Marike de Kroon and Sarah Blick respectively on the iconography of pilgrim badges and on the use of such badges to reconstruct the appearance of the lost shrine of St Thomas Becket at Canterbury. Two further essays by Katja Boertjes and Jos Koldeweij address the iconography of Sainte Larme ampullae from Vendôme and the phenomenon of obscene badges as parodies of popular devotion. Intriguing is also the interpretation by Jennifer Lee of pilgrim badges as markers of affiliation with a particular saint, yet of low intrinsic value and as such discardable once no longer worn. Lee bases her ideas on both the Miracula Sancti Thomae Cantuariensis and the fact that most Canterbury badges have been found amongst discarded rubbish from the fourteenth and fifteenth centuries along the shore of the Thames in London, which suggests a limited life-span or interest on the part of the owners.

Part VI on the "Politics and practicalities of cult development" covers subjects ranging from the host-miracle shrines of Orvieto and Wilsnack; the promotion of St Æthelthryth's cult at Ely; the Burgundian politics behind the pilgrimage to the Chartreuse de Champmol; and a study by Mitchell Merback of the host-miracle cult in late-medieval Germany and its relationship with the Armeseelen in Purgatory. Finally, part VII on "Cults and cult practices" offers essays on the iconography of thirteenth-century Rheno-Mosan châsses and on the blockbook of St Servatius of Maastricht; an historical overview of pilgrimage and procession by Rita Tekippe; and a discussion by Lisa Ciresi of the Karlsschrein and Marienschrein in Aachen. The latter is particularly topical, in view of the forthcoming ostension of relics at Aachen in 2007, and it is rather a pity that the author refers to "the swaddling cloth of the Christ child" in the Marienschrein instead of using the term Josephshosen, which is how this relic was known in the Middle Ages.

Many essays have their origins in earlier sessions on medieval pilgrimage presented at the International Congress of Medieval Studies at Kalamazoo; others were submitted separately and at least one essay is based on an earlier article published elsewhere. Helpful notes have been added in places by the editors to refer readers to other essays in the book. Some of the shorter chapters have a very clear and narrow focus, such as Ilana Abend-David's essay on the architectural representations on the medallions of the Heribert shrine (part II). Others, however, are very ambitious in scope, such as the lengthy survey articles by Bugslag, Merback and Tekippe. The latter outlines different aspects of processional practices, ranging from translation ceremonies, rogations, and penitentials, to cases of communities fleeing with relics because of Viking attacks or other threats. Inevitably in this approach some discussion may be very brief: the aspect of drama / tableaux is summarily dealt with in barely half a page.

It is refreshing that "art" is here interpreted in its widest sense to include not just "high" art (e.g. Memling's paintings) but also more mundane and utilitarian objects such as pilgrim souvenirs and dress. Thus Anja Grebe's essay (part I) offers a detailed case study of the surviving - but in many ways atypical - 1571 outfit of a Santiago pilgrim that once belonged to the Nuremberg merchant's son Stephen Praun (1544-91), in addition to much shorter discussions of the extant coat of the South Tyrolean knight Jakob VII Trapp of Churburg (1529-63) and the burial finds of the "Worcester Pilgrim". Yet perhaps the essay should have concentrated on these three fascinating, but rather late survivals instead of juxtaposing them with much earlier pictorial sources, such as the two pilgrims in the Romanesque tympanum at Autun, in an attempt to draw wider conclusions on the nature of medieval pilgrims' dress. In most essays art or architecture are the focus of the argument; in others art serves more as an illustration of historical points made in the text, sometimes with relatively little discussion of the images themselves.

The b/w illustrations are on the whole of good quality, except that fig. 186 is printed upside down. No location is given for the Heribert shrine in figs 78-84. Fig. 281 on p. 88 should be 287, and likewise fig. 334 on p. 715 should read 336, but these are rare errors amidst such a huge number of illustrations. There are some editorial and linguistic lapses. Thus, "Osee" should be Hosea (655), whilst St Elizabeth of Thuringia is also called "of Thüringen" and "of Marburg" in the index. Miraculous "blood hosts" are said to have been "exposed in monstrances and processed" (620), and unintentionally comical is the description of the Virgin as "an actress in the Adoration of the Magi" (661). Bernhard von Breydenbach, the dean of Mainz cathedral and Jerusalem pilgrim, is German rather than "Dutch" (332), and it might have been helpful to know the location of Becov ned Teplou (654, fig. 310). Finally, readers may find themselved confused by the alphabetical listing in the bibliography of "Os, Henk van" under O vs. "Van Herwaarden, Jan" under V, and also "De Vos, Dirk" under V yet "De Pelsmaeker, Prosper" under D, to name but a few examples. Apart from such details, however, this is truly an editorial tour de force.

This impressive work does carry a hefty price tag. Yet nobody studying aspects of medieval pilgrimage can afford to ignore this important and wide-ranging collection of international research on such a vital aspect of medieval culture.