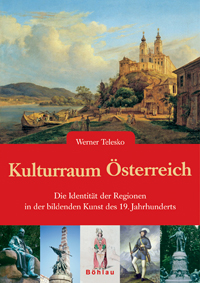 This comprehensive study is the sequel to Telesko's acclaimed 2006 study Geschichtsraum Österreich. Die Habsburger und ihre Geschichte in der bildenden Kunst des 19. Jahrhunderts. There, the author provided an astute analysis of a broad range of imagery representing the Habsburg nation-state during the nineteenth century. In Kulturraum Österreich, Telesko complements his earlier study by examining visual manifestations of the Habsburg Empire's local and regional identities during this period in separate chapters devoted to Kärnten, Niederösterreich, Oberösterreich, Salzburg, Tirol, Steiermark, Südtirol, Vorarlberg, and Vienna. These are contextualized with a daunting, interdisciplinary breadth and depth spanning myth, history, the psycho-emotional impact of contemporary political events, and traditional social and religious practices.

The first six chapters set the stage from conceptual and historical viewpoints for understanding the choices Austria's various regions made in formulating and articulating their singular identities. In his introduction, Telesko observes that understanding the past is crucial to comprehending nineteenth-century attitudes about the present. Further, Telesko asserts that local and regional identities depend on characteristics that transcend rigid class boundaries and manifest continuity with the past. The first two chapters, "Die Auseinandersetzung mit der 'Türkengefahr' im Gedächtnis des 19. Jahrhunderts" and "Geschichte als Gegenwart - die Präsenz zeitgenössischer Ereignisse in der Kunst", take up the most galvanizing example of such experiences: defense of the home(land). For citizens of German-speaking territories in the nineteenth century, liberation from Napoleonic occupation in 1813 (Befreiungskriege) was the seminal event. For Austrians, however, this evoked memories of an earlier struggle, the emancipation of Vienna from Turkish occupation in 1683. The presence of this historic event is evidenced by its repeated depiction in illustrations, paintings, commemorative medals, and a monument commemorating the bicentennial of the liberation in the cathedral of St. Stephen in Vienna.

In chapters 3 through 7 Telesko explains the singular aspects of Austrian national identity as essential background for contextualizing regional identities in chapters 8 through 15. Chapters 3 and 4, "Das 'Schicksalsjahr' 1848"and "Dynastie und Kirche als 'Garanten der Kontinuität'", show how the struggle for hegemony - between the church and state, who wanted to maintain it, and the middle and working classes who wanted to attain it - emerged in visual culture.

Telesko examines the complex constellation of meanings embedded in commemorative monuments in Chapter 5, "Die 'Monumentaliserung' der historischen Erinnerung im Denkmalkult". He argues that monuments, whether of an individual or an event, not only shape public perceptions of the past, but help to formulate attitudes toward the future. Telesko discusses monuments as "performative texts", whose meanings are products of specific socio-historical conditions. A sampling of several dozen monuments from throughout the Empire, the result of state as well as private initiatives, illuminates the various ways monuments celebrate carefully selected ideas. Especially fascinating is Telesko's consideration of Anton Dominik Fernkorn's monument to Archduke Carl, who commanded the German troops who forced the retreat of the French army to west of the Rhine in 1796 and Austrian troops who triumphed over the French army at the Battle of Aspern-Essling in 1809, thus preventing the conquest of Vienna by Napoleon. Installed in 1857 and inspired by Balthasar Moll's monument to Emperor Joseph II (1778, Laxenburg, Altes Schloss), Fernkorn replaced the saber with which the Archduke led his army with a flag, effectively transforming Archduke Carl from a military leader to the inspirational "Savior of Germany", an accolade he had earned in 1796. Subsequent representations retained Fernkorn's composition, elevating the Archduke to an embodiment of patriotic valor, a formula repeated in Josef Tuch's Hesser-Denkmal (1909, Vienna) and Johannes Benk and Anton Weber's Deutschmeister-Denkmal (1906, Vienna), both of which promote a more generic and symbolic idea of unity and patriotism.

The utility of conceptualizing Austrian art in terms of a center-periphery dichotomy forms Telesko's central argument in Chapter 6, "'Zentrum' und 'Peripherie' als Erklärungsmodell für die österreichische Kunst des 19. Jahrhunderts?" He argues persuasively that this approach clarifies the fraught and multifaceted relationship between the state and its constituent regions, rather than reducing it to one of conflict, a tendency in earlier studies. Indeed bureaucratic efforts to successfully promote national identity within a multi-ethnic empire characterized by fervent local identities is one of the distinguishing and most intriguing aspects of modern Austrian history.

Telesko identifies the characteristics of each region that natives identified as singular, explains the history behind them, and analyzes their visual manifestations in the nineteenth century. As elsewhere in Europe, landscape, and the rootedness of inhabitants in it, plays a central role, as do mythologized local heroes and pivotal historical events. Throughout the book, the reader is impressed by the thoroughness of Telesko's research, the even-handedness of his scholarship, and the nuanced and thoughtful interpretation of images and events. The only aspect about which one might complain is the dearth of illustrations, particularly in color. Many works discussed by Telesko are not illustrated and all images are black and white. Naturally, this is a reflection of budgetary constraints and an ongoing source of frustration for those writing about visual culture. This notwithstanding, Telesko's monumental achievement establishes the point of departure for further and more detailed investigations of the understudied imagery of nineteenth-century Austria.