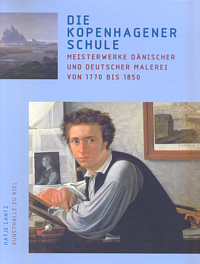 In 2005, the Kunsthalle zu Kiel held the exhibition, "Die Kopenhagener Schule. Meisterwerke Dänischer und Deutscher Malerei von 1770 bis 1850," as part of a year-long "Look to the North" celebrating the 150th anniversary of Germany's northernmost art museum. The exhibition focused on the interchange between Danish and German painters during a period when Denmark's Royal Academy of Art in Copenhagen held a preeminent place among northern Europe's state-sponsored art academies. Like the eye-opening Scandinavian exhibitions of the 1980s which demonstrated that Realism and Symbolism were not necessarily irreconcilable, "Die Kopenhagener Schule" convincingly argues for the pivotal role played by Northern Europe in initiating progressive, even modernist, artistic ideas and approaches in the decades around 1800.

The exhibition included more than one hundred works by forty artists and was accompanied by a 280-page catalogue, enriched by full-page, color images of all works in the exhibition. While reproductions are never as good as a first hand encounter, the quality of the images is high enough that the reader does not feel unfairly handicapped in trying to appreciate the works presented. The exhibition team, led by Dörte Zbikowski, exhibition director at the Kunsthalle, did an excellent job of balancing familiar figures such as Caspar David Friedrich and Christoffer Wilhelm Eckersberg with less, if not un-, familiar names like Carl Andreas August Goos and Friedrich Thöming. As a result, the reader enjoys the thrill of discovery within a context of reassuring landmarks. Concise yet thorough biographies of the artists make the catalogue to "Die Kopenhagener Schule" an important resource, particularly in the case of the more obscure artists. Endnotes accompanying the biographies anchor them in relevant scholarship and provide the curious reader with welcome guidance for further investigation.

Nine short essays focus on selected aspects of the Copenhagen Academy and its contribution to Danish and German art. It becomes immediately clear that the time has come for a reexamination of the Copenhagen Academy for a variety of reasons. Prominent Danish professors Jens Juel and Nicolai Abildgaard are virtually unknown outside of their native Denmark, despite their pioneering anticipation of the later Romantic and Biedermeier movements, as Kunsthalle director Dirk Luckow observes (10). In reading about the origins of the Copenhagen Academy under Frederik V in Dörte Zbikowski's essay, one is surprised to find such an international (English, French, German, Italian, Swedish) array of teachers, leading this reader to wonder if this dynamic situation did not contribute to the Copenhagen academy's unusually progressive character. Another surprise is the direct and early link between Neoclassical "guru" Johann Joachim Winckelmann and the Copenhagen Academy, through the agency of Danish sculptor Johannes Wiedewelt. Wiedewelt met Winckelmann in Rome during the 1750s, and began disseminating his ideas when he returned in 1761 to teach at the Academy. This close connection with Antiquity was further promoted by neoclassical sculptor Bertel Thorvaldsen, who spent most of his career in Rome, functioning as a crucial contact for Kopenhagen Academy students between 1795 and 1838, when Thorvaldsen returned to Denmark.

The main character in the story of the Copenhagen Academy, however, is Eckersberg, as several essays make clear. The range of his curricular reforms and the impact of his ideas on students are astonishing. Zbikowski notes (25) that Eckersberg encouraged artists to paint motifs directly - outdoors, if necessary - thus anticipating naturalist impulses generally associated with developments in France and England.

Nino Zchomelidse's complementary essay describes Eckersberg as a seminal force in the collaboration of art and science during his more than three decades (1818-53) as a professor. Eckersberg introduced biology, chemistry, math, optics, and physics into the curriculum and encouraged art students to further their knowledge by taking courses at the academy of natural science when it was established in 1829. This firm grounding in science explains in part the precision with which painters of the Golden Age (the appellation given to Danish Biedermeier) recorded their world. Eckersberg's rationale for emphasizing science resulted from his desire to coherently convey the inherent order and harmony of the universe. When Gustav Friedrich Hetsch joined the faculty in the 1830s, he enhanced the courses in geometry and perspective, thereby equipping students with more precise tools for recording the world, as Regina Schubert explains.

While Eckersberg's curricular reforms reflected, on the one hand, a pietistic Lutheran world view, they also anticipated modernist pioneers like Georges Seurat who half a century later applied then-current scientific theories to the same end. Up to now, this holistic attitude was more closely associated with progressive French artists in the final decades of the nineteenth century, but the essays in this catalogue consistently indicate that such progressive impulses had their roots earlier, in of all unlikely places, Copenhagen.

And it was not only aesthetics and composition that signaled a modernist attitude in early nineteenth century Copenhagen. Petra Gördüren points out that new modes of artist consciousness were promoted by new forms of social interaction that were in turn the product of changing conditions in the decades around 1800 - improved communications, a fledgling market economy, and a growing middle class with escalating claims to social and political power. The proliferation of artist portraits and self-portraits are important indicators of these changes, as are the unprecedented number of images of artists in their studios and paintings depicting groups of artists meeting in public places - smoking clubs, reading rooms, coffee houses, and restaurants - a subject traditionally associated with congenial gatherings of Impressionist artists in the 1870s.

Jena professor Johannes Grave makes an important contribution to our understanding of Friedrich by piecing together the sparse evidence from Friedrich's Copenhagen years (1794-98), which have generally been ignored as irrelevant to Friedrich's development as a landscape painter. To the contrary, Grave demonstrates that a closer examination of this period reveals hints of Friedrich's later penchant for back-facing and solitary standing figures, particularly in his illustrations for Friedrich von Schiller's play "Die Räuber" (1781).

With the notable and inexplicable exception of still life - and many still lives were painted during this period -- the full range of subject matter produced by Copenhagen academy pupils is represented in the catalogue - history, literature, religion, portraiture, and genre. Because they were intended for middle class clients, these paintings are small in scale. This is enhanced by a compelling sense of intimacy, aided by exacting detail and rigorous perspective. The reassuring sense of well-being permeating most of these works is occasionally disrupted, for instance in Wilhelm Marstrand's heartrending depiction of a seamstress-widow being evicted along with her two children (137).

Although this catalogue presents so much refreshingly new and important information, this reviewer could not help wishing that some of the essays had gone into more depth and contextualized their material more thoroughly. For instance, the nineteenth-century urge to formulate a distinctly Danish school of painting was related not only to escalating territorial conflict with Germany over the provinces of Schleswig and Holstein (15), but also to the cession of Norway to Sweden in the 1814 Treaty of Kiel and the influence of political philosophy, particularly the ideas of Johann Gottlieb Fichte. And Eckersberg's curricular restructuring took place in an atmosphere of educational reform initiated in 1814, when Denmark passed the very first law guaranteeing free primary school education for all of its citizens. It would be interesting to know how the Copenhagen academy's curriculum compared with that of Danish primary schools. Did they evidence a similar interest to integrate science and aesthetics and to convey a rational and harmonious world view?

After reading the catalogue, one is left with many thought-provoking answers, and also many questions. This catalogue may well be the long-awaited catalyst to further research in an important, yet neglected realm of art history.